I'm really pleased to see that the powers that be have discovered why the songbirds are declining - nothing to do with intensive farming, loss of habitat or anything like that, just Crows and Magpies. Nature was never meant to find it's own balance because we can do it soooooooo much better. I thought it was the other way around but I guess I'm wrong! Something stinks.
Anyway, back to the proper stuff.... Saturday was nice, Sunday and Monday were not so good but I wasn't out on any of those days so it didn't matter. Tuesday was forecast to be quite nice so I put a couple of hours in despite the windy conditions. The Otters have been easy to spot in the calm conditions we've had recently so I didn't even bother looking in the choppy water. I was after something a bit different that I hadn't seen for a while. I amused myself, initially, by watching the Hooded Crows on the beach.

As you can see one of the birds is ripping away at the seaweed covered rock. The bird is trying to prise a mussel free so he can fly up with it and drop it on the rocks to open it. Clever birds - you can see the mussel in this birds beak. 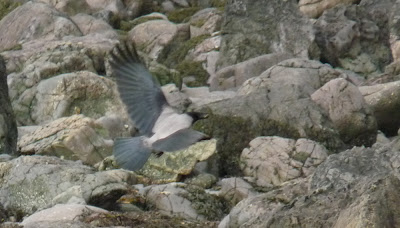 Not the clearest of photos but I like them like that! The main event wasn't too far away from these Hooded Crows so I wandered off to see if I could get some photos. Luckily the wind was favourable enough for me not to smell these (stinky) beasts but they didn't seem too bothered about my smelly presence either - Wild Goats. These beasts spend most of their time hanging on the cliff face trying to eat a single blade of grass but in the Winter they head for the beach for some nice seaweed instead. 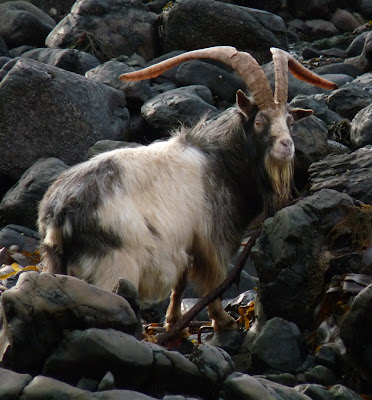 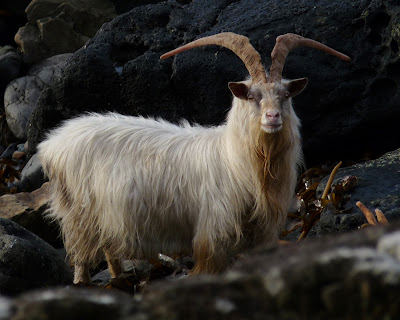 They even look smelly. 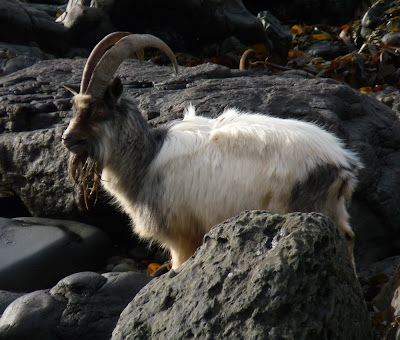 A very impressive set of horns for a youngster and almost cute...maybe! 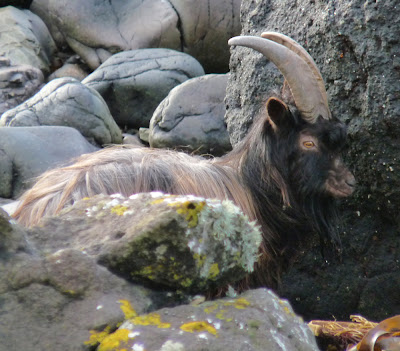 There were plenty of Common Seals just offshore...

...but no sign of anything else out there apart from Shags. I knew there were showers forecast through the day and I was watching a really black, heavy looking cloud approaching so I thought one more look around before heading back to the car. It was worth the effort as I spotted a single WT Eagle approaching. I headed for the car to get the scope while trying to keep an eye on the bird. I had to lose sight of the area while I got the scope and I was amazed to see four WT Eagles in flight while I set the scope up!! 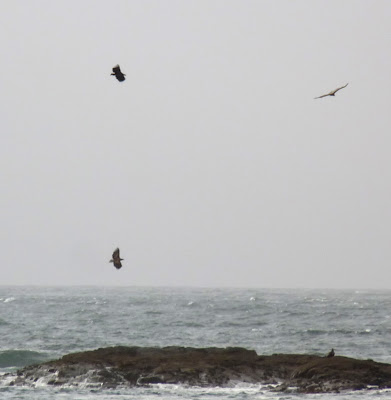 That was a result. They were all juvenile birds, no tags or satellite transmitters, just as they should be, White-tailed Eagles. The hail came pelting down after about five minutes of viewing these birds so I beat a hasty retreat.
Posted by Bryan Rains at 20:08

LOL We've seen the goats at Carsaig but I don't remember smelling them...is it a seasonal thing, or did we not get close enough?!

I love your photos of the beach-side goats. What big horns they have! Except for the youngster with the little horns, they look like they are old and wise.