Friday turned out to be a bit on the cloudy side so there was no real plan to go out until I was informed that there was a WT Eagle that might be worth a visit. I headed off to see if I could pick the bird up. I could see the bird sitting on some rocks from a fair distance away so I found a place to park up and started walking to a viewing point. I just got the bird back in my sights, still at some distance, and it decided to leave!! I wandered back to the car and drove in pursuit, checking a few favoured locations with no luck. I did find my first Shelduck of the year and there is always a Great Northern Diver to look at. 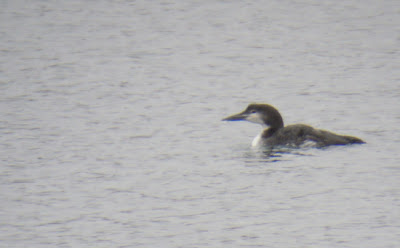 I headed back along the way, checking again but there was still no sign. A couple of hours later I was informed the bird was back so I tried again and managed to get a couple of shots before the bird was flushed. 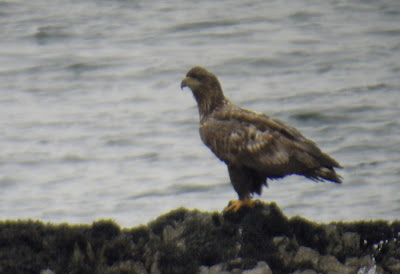 The bird landed a few hundred yards further away before taking flight again and settling in the forestry. I had been wondering what was holding the bird in the area and as I approached the car I discovered one of the reasons...an Otter fishing.

The WT Eagles will attempt to steal fish from the Otters on occasion but a lucky find for me all the same. I watched this one as it swam past me and I noticed a tail disappearing a bit further out - two Otters then. I watched the first Otter going on his way and then picked up these two on the rocks. 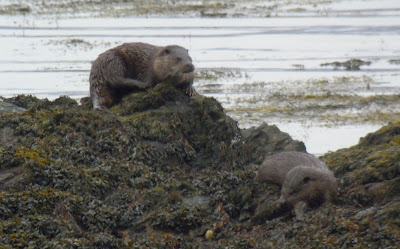 That'll be three Otters then! I watched as the youngster polished off the fish while the mum looked on. 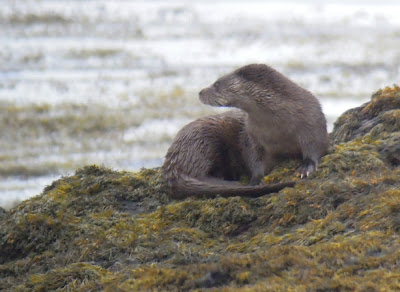 I could still see the dog Otter moving away from the area but when the closer two left the rock and headed for open water imagine my surprise when I saw this...