There is a lack of urgency at the end of January after the initial rush of starting the new year list and the weather doesn't help either. The last few days have been a bit dull, overcast, showery - you get the picture. I've been out checking on both types of eagles (they are doing well), noticing the distinct lack of Meadow Pipits and bigger flocks of Rock Pipits, 5 Little Grebe instead of the usual four wintering birds but nothing out of the ordinary and no pictures either! The 'soul food' over the last few days has been the small flock of Crossbills. One of the male birds is using the conifers at the back of the shop as a singing post. Here he is doing his thing. 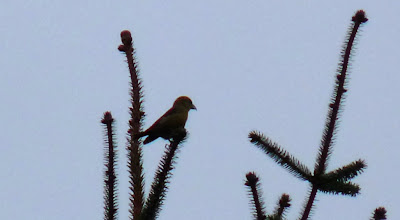 The garden feeders are getting well used but there is a distinct lack of Coal Tits this winter - I haven't even heard one! There is no shortage of Chaffinch though. 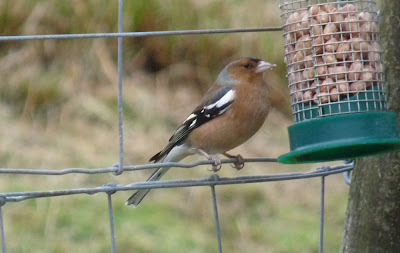 The weather should improve soon and bring some of the 'missing' birds back into the open.
Posted by Bryan Rains at 21:50