The high winds on Thursday didn't appear to cause too much damage but they did bring down some trees onto the electric cables so there was no power from 19:30 on Thursday until mid afternoon on Friday. Needless to say I wasn't out in any of that. The weekend was taken up with other activities too with Monday being the only day I went out. The best sighting on Monday was the White-tailed Eagle having a quick look at us as it swept over the shop.
Tuesday was a much better day for going out. I had to fill the car up too - something to be avoided at £1.44 per litre!! Using the time and fuel wisely I picked up PS along the way and we went in search of wildlife along the way. We picked up a 140 strong flock of Barnacle Geese not long after the visit to the garage.

A couple of Shelduck, three Turnstone, a Ringed Plover, House Sparrow and Skylark were all noted too. A suspected piece of flotsam - can you tell what it is yet?... 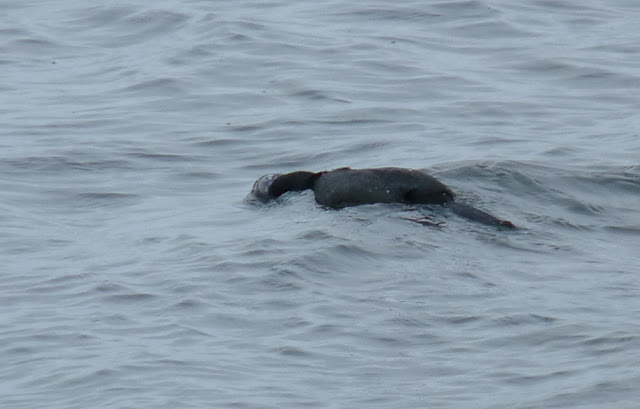 ...had me stopping for a better look as it raised it's head. 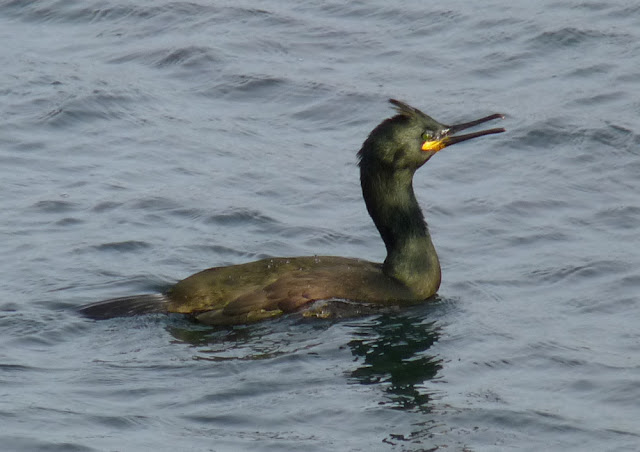 A cracking bird that Shag - just look at the beautiful green sheen to the plumage, a real gem! A bit of a lull after that with only a couple of Buzzard and a brief view of a Sparrowhawk to keep us going. We finally picked up a couple of Otters swimming along the shore so it was time to stop again. The Otters hauled out on a rock to join one that was already there and fast asleep - quality! 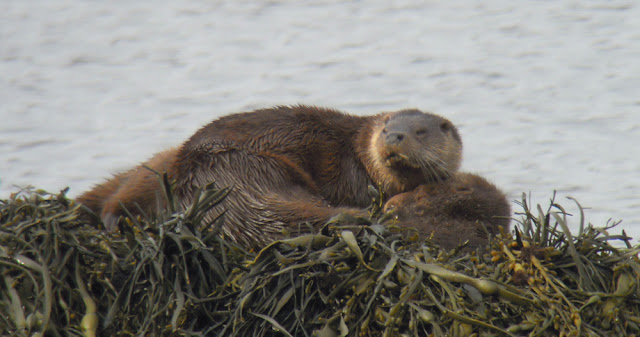 We left those ones to get some well earned rest and picked up another Otter about a mile down the road. This one was out fishing too and soon heading to shore with a fish but it hauled out in a hard to view area - we pressed on. A quick stop for lunch and then off for more excitement. Yet another Otter on the shore but that was soon on the move so we'll come back to that one. Time to look for something else methinks - a Dipper was a welcome distraction. 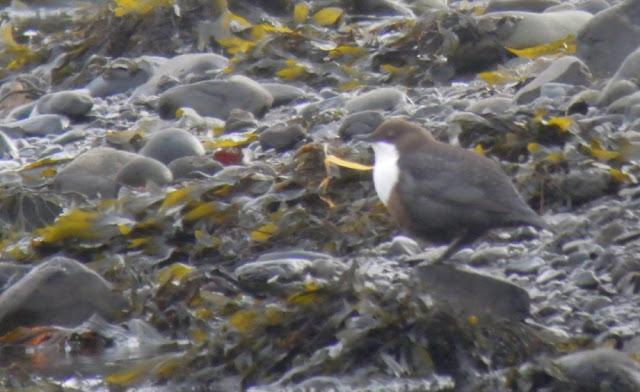 We'd seen plenty of stuff on the water with GN Divers in abundance, RB Mergs in small groups, plenty of Greylag Geese and a smattering of gulls but a pair of White-tailed Eagles topped the day off quite nicely. I managed to get in a decent position to get a photo of the male bird before we headed back to the Otters. 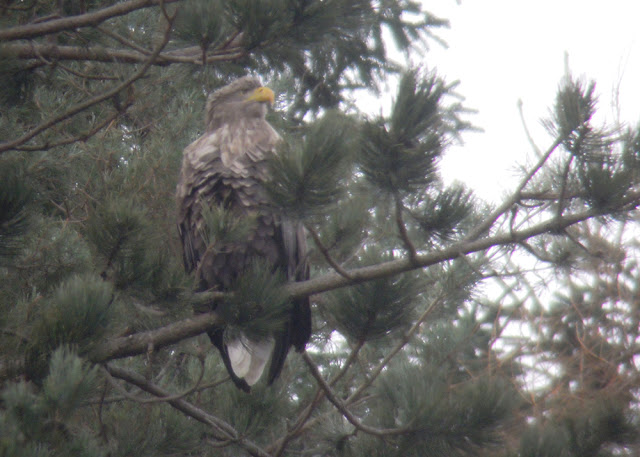 Otter number six was soon in the bag and giving some real good views as it sailed on past us at close quarters. 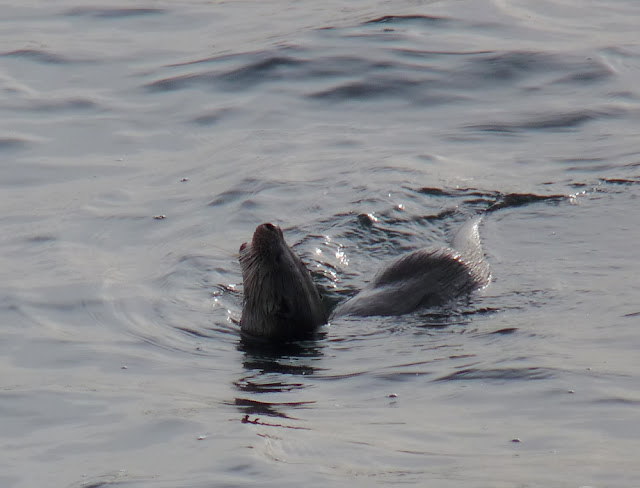 This one was fishing close to shore and hauling out with most of the catches so it was worth watching for a while. Here it is demolishing the last bit of a crab - not that you can tell, mind. Down the hatch! 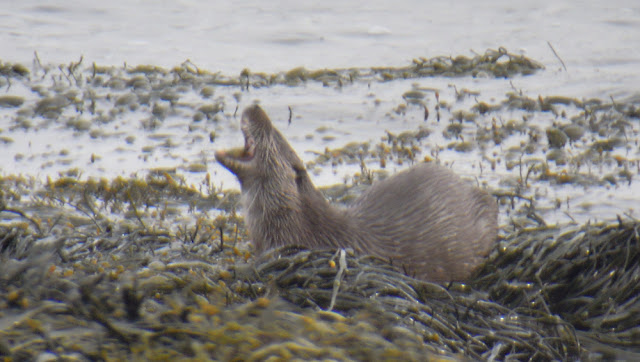 A Grey Heron was standing close by with a Curlew approaching the same area. They both stopped what they were doing when the Otter hauled out again close to them. 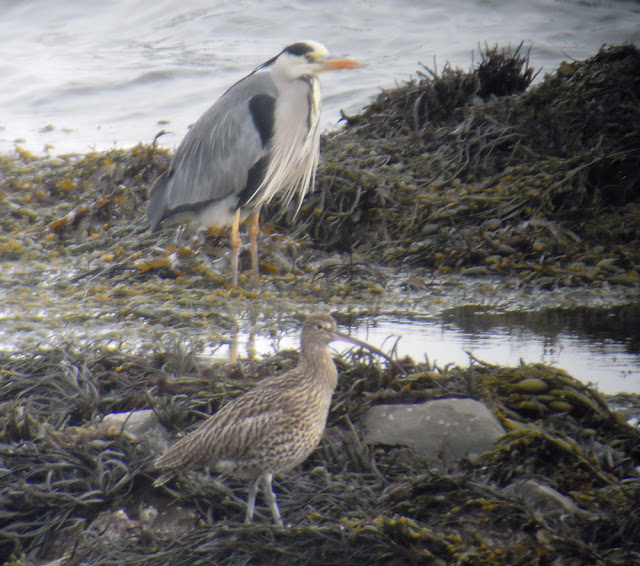 As we moved back around the loch we picked up Otter number five again. Once again it was on the shore but attracting the attentions of a Great Black-backed Gull. When we got a good view we could see the Otter had a decent sized flat fish but it didn't want to be watched with it's meal. The GBB Gull followed the Otter but the Otter kept moving on. We left them to argue the toss. Well, it had been an interesting day with some good sightings along the way but the Otters had certainly stolen the day. We saw a few Red deer on the way back but none better than this handsome Stag - a good way to finish the day. 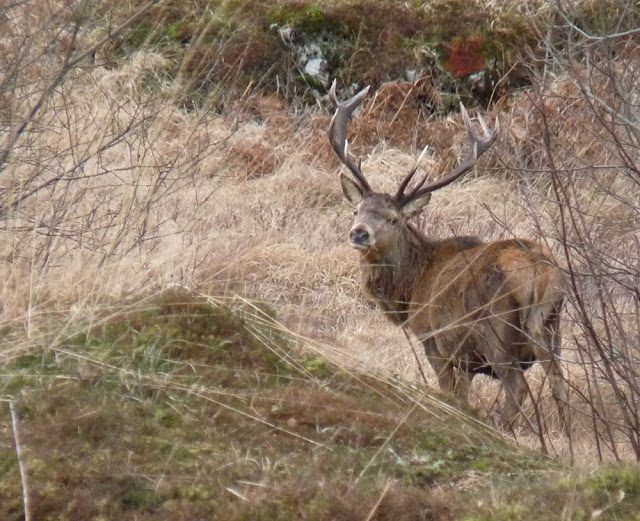 Hi Bryan what a great photo of that lovely shag.