Pick of the bunch.

Monday I had a quick run out to try and catch up with the Red Kite again. The weather was spot on with clear blue skies and no sign of any of the snowy weather that seems to be troubling everywhere else. I was expecting a bit of a wait for the Kite so when I picked up a couple of WT Eagle on the shore I set about setting the scope up for a better look. I got as far as extending one of the legs on the tripod and the Red Kite appeared. I ditched the scope back in the boot and raced for the camera while the Red Kite gained height and just fired off a few shots - they were rubbish but here is the best of the bunch. 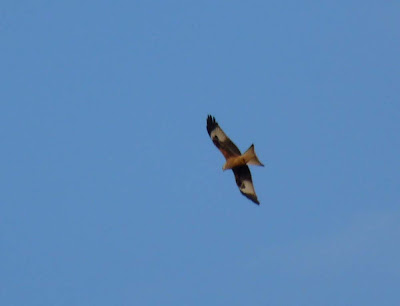 With the red one gone I got back to the white tailed ones - there were three of them by now, all juveniles. One of the birds was one of this years East coast birds with a tag Yellow C and the other two were this years with no visible ID. Yellow C took to the air and swept out over the water and then lunged down at an Otter surfacing with a fish - it left with empty talons. As the bird came back to land I went for the camera, bunged it on the scope and I couldn't find anything!! All three birds had moved out of sight in a matter of seconds - what luck eh? A bit of a commotion and there was one of the birds leaving, camera at the ready, half press the button, wait for the focus, COME ON, FASTER!!!!!, snap. Too slow. 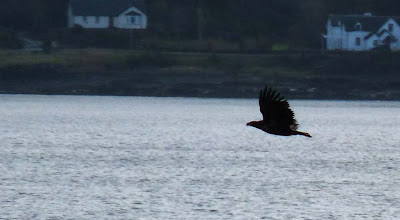 That was as bad as the Kite shot. I headed off to look for the Red Kite again and found it sitting in a tree about a mile from the nearest viewing point. That was enough of that for one day. I only had about an hour left so I moved on and what a lucky move that was. I picked this bird up as I was driving down the road, stopped as close as I dared and set the scope up - awesome! 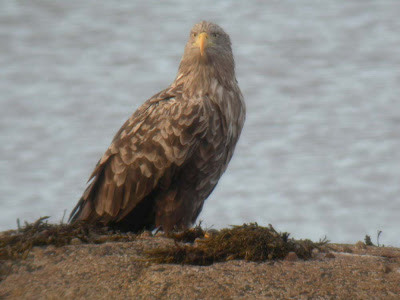 That's one piercing look you get when it peers back down the scope at you and you could fear for your life when you see the hatchet bill in profile. White-tailed Eagle - what more can you say, a bit special. 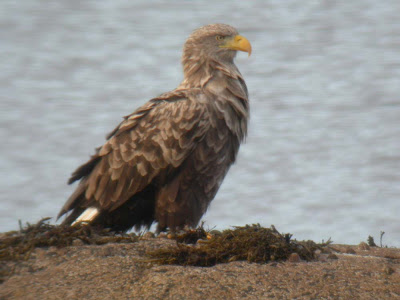 I wasn't going to better that so I headed back to the shop where I picked up a male Hen Harrier. The afternoon was taken up with other things but I did catch sight of three Woodcock as the sun went down.
Tuesday was another cold, still day - just stunning. I went to pick PS up and bagged an Otter, a Woodcock and 12 Red Deer along the way. PS had flushed a Dipper from the burn on the way to our meeting point so a good start to the day already between us. PS was keen to see the Red Kite but we had a quick check round a few places first. Two Pink-footed Goose (only one in the photo) in with the Greylags... 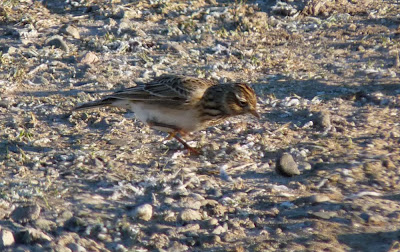 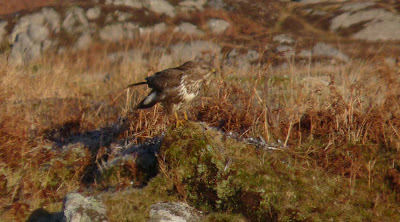 ...a squad of 24 Tufted Duck, 2 Goldeneye and a Whooper Swan was a nice start. We carried on with the good sightings - a few Eider, a couple of GN Diver and a RT Diver were the pick of the bunch. We picked up three Otters that were too far away for photos and a WT Eagle that was even further away. Luckily we were able to get a bit closer to the White-tail and get a couple of backlit shots. 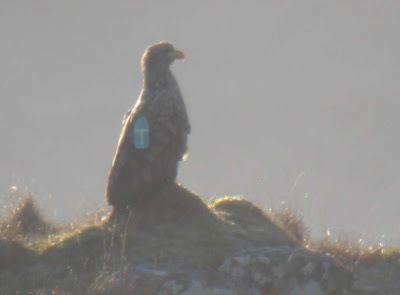 A proud looking bird indeed. We travelled on and managed to get a good view of the Red Kite as it sneaked in from behind us and headed into the distance - you could almost hear it laughing as it went! A Black-throated Diver showed well in the scope but the camera wouldn't capture the moment - stunning bird though. 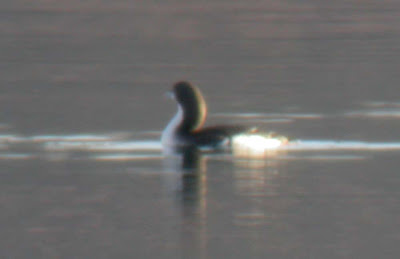 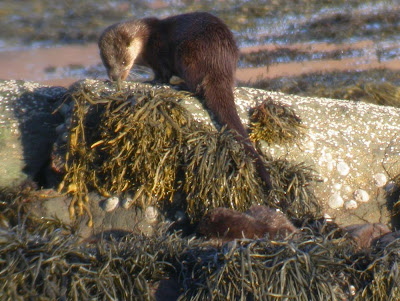 A minor distraction was this Great Northern Diver that was fishing the shore just below us. 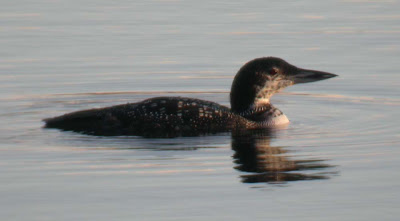 There was more but that's the pick of the bunch.
Posted by Bryan Rains at 22:41

Excellent shots of the sea eagle.

Excellent shots of the sea eagle.

Really good pics and blog glad you enjoyed yourselves and you seem to be able to find Red Kite at will,is the tagged W T a mull bird or incomer.