Wednesday was due to be the last of fine weather and what a cracking start to the day with the sun giving the snow a rosy glow on the Ben. 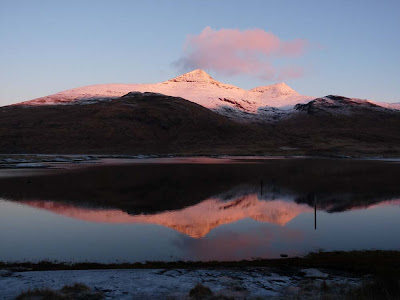 As you can tell I'm making the most of these good days so I was heading out again! I managed to drive all of twenty yards before I was out trying to get some shots of the waders. First up was the Golden Plover. A lot of people ask why they are called 'Golden' Plover when viewing these birds on a dull day. Hopefully I've captured enough of the golden colour on these birds. 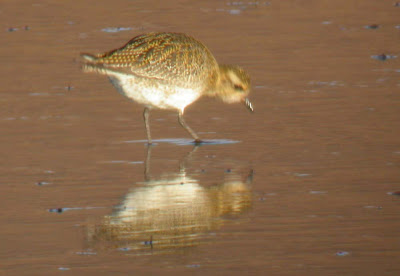 The view through the scope was a vast improvement on what you see here - stunning birds in the right light. 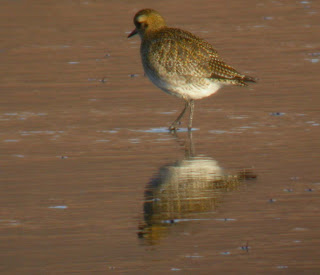 There were a few Ringed Plover running around further back and the Turnstones were all busy riving away at the tufts of seaweed but the single Dunlin has managed to pull in a couple of mates.

After packing the gear away I scanned the ridges and picked up a distant WT Eagle that was just heading off into the distance. Ben More was looking quite picturesque with a wisp of cloud coming off the snowy top while I was waiting for the Red Kite to put in an appearance. 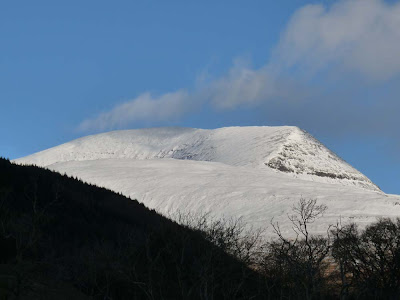 I'd been keeping an eye on a group of birds that were obviously on some food with the Raven keeping the Hoodies and the GBB Gull at bay. It could only be some scrap of fish that an Otter had left so that wouldn't be far away either.

The Hoodies left then the GBB Gull and the Raven zipped off too just as the Red Kite came into view and finally I nailed the bird. 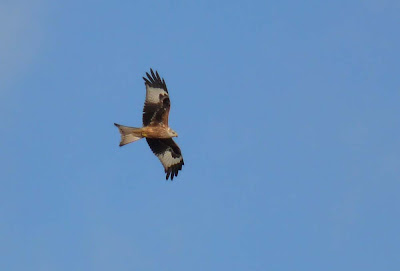 The Kite circled around for a couple of minutes before it started to drop towards where the Raven had been. The scope was still set up in the same place and I managed to capture the bird as it came in to land. 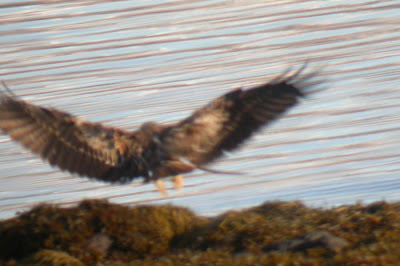 The bird had a bit of a look around and maybe found a couple of scraps before it was off again. I looked back towards the seaweed covered rocks and saw a couple of tails sticking in the air - Otters. They disappeared out of sight so, with the Kite gone, I went for a closer look. When I picked them up again they were still on the land but it wasn't two Otters, it was three - result. I just sat watching them grooming on the shore for 15 minutes before they headed out on a fishing expedition.

Their catch rate was pretty good, as usual, so it wasn't too long before they were back on shore with a prize.

I watched the trio for another half hour or so before I headed back to base.
Posted by Bryan Rains at 21:06