Last of the summer wine.

It was no surprise on Thursday morning to find our piece of the world had a big grey blanket thrown over it. The temperature had shot up 10 degrees to a balmy plus 4 but the rain was a bit of a spoiler. I was contemplating going out when Postie and f-stop turned up for a coffee break on their trip out so I invited myself along as there was just enough room for me in Postie's car. There was some insane, surreal and funny conversations along the way with a few good sightings too. We must have looked and sounded like Compo, Clegg and Foggy as we wandered along the road chatting. We had a cracking sighting of a Sparrowhawk having an aerial dogfight with a Hooded Crow. The Sprawk was really having a good go at the Hoodie with some very impressive manoeuvres executed before the tables were turned. We half expected to find them scrapping on the side of the road but we weren't that lucky. One of the Black-throated Divers was just offshore from our next stop but with no digiscoping gear I had to make do with the FZ28. 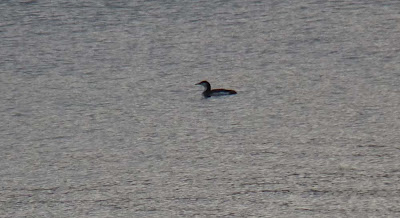 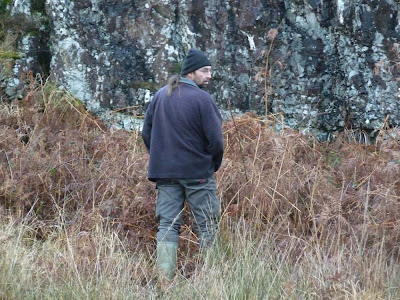 While we were scanning about for Otters a group of Common Seals surfaced together and then disappeared again - we named them the Scridain Seven Seals Synchronised Swimming Society otherwise known as the suh, suh, suh, suh, suh, suh team! It was getting close to lunchtime when we picked up a couple of Otters so it was time for a wander down the road to keep an eye on the tumbling furry animals. We'd decided that these two were the cubs due to the amount of playing about they were doing but watching all that activity was making me hungry. My sandwiches were in the car and I was determined to hold out till noon. Every time Postie lifted his bins I sneaked a peek at his watch..11:40, 11:42 a bit of ribbing about me clock watching, 11:53... I could hear my sarnies shouting for me! Dead on twelve a Merlin flew in and landed at the top of a tree - so much for lunch. I was never going to get close enough for a decent photo but you can tell what it is. 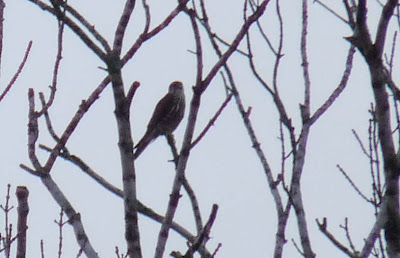 Time for lunch at last. The Otters were not getting any closer so we moved on to look for a Dipper that f-stop said had been seen regular. Even he was amazed to find the Dipper sitting at the edge of the river as he's usually excellent at finding nothing;-) I managed to get a stunning shot of the bird in it's natural surroundings... 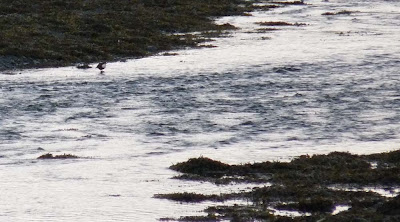 ...before f-stop went stalking it. As you can see he tires easily and needs a lie down and he's probably eating seaweed (photo courtesy of Postie). 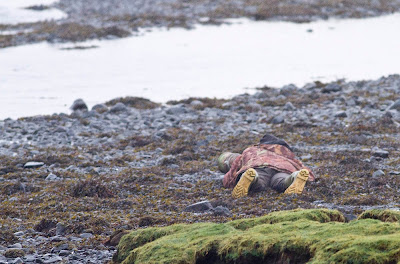 The rain started lashing down so me and Postie sat in the car laughing at the wet one on the shore. Our time would come. The rain stopped and the bird flew towards us so we did get some shots... 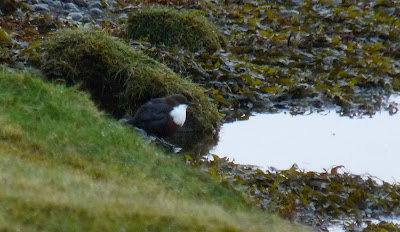 ...but when the bird flew back down towards f-stop it landed about 2 yards from him!! Needless to say he got some good shots. We headed back towards the Otters. We watched them fishing in the bay with regular visits to land with fish. One was noticeably bigger than the other and bringing fish ashore for the smaller one. Did we get it wrong earlier or had the mum come out and one of the cubs was asleep on the shore somewhere? Who knows but they were nice to see. It was starting to get very dull as the invisible sun dipped towards the horizon so there was just enough time to squeeze in one last good sighting. We picked up a Golden Eagle from outside the shop before we headed along the road. Once again scanning for Otters, with no luck, we hit lucky as a juv WT Eagle appeared. It was tagged and had a sat pack on so possibly Yellow C again. 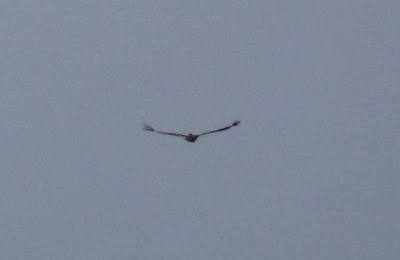 Thanks for a very entertaining time guys.
Posted by Bryan Rains at 14:29

Have just had the Craignure policeman enquiring about the identy of f-stop. He told me that anyone displaying such aggressive behaviour with an inoffensive weapon in hand, in a public place should be dealt with in a most severe manner.