Tuesday and Wednesday I stayed close to home as I had to put the effort in to try and keep the water supply moving. The clear skies and chilly weather were continuing but they were starting to take their toll on the wildlife. A juv WT Eagle has been hanging around to try to steal a catch or two from the Otters with the added attraction of a Grey Heron that had succumbed to the weather. While watching the action I was surprised to see another Grey Heron fly out of the woods next to me and land quite close on the shore. When it landed it kept it's feathers all fluffed up and didn't look too healthy. It walked away from the waters edge, lay down and tucked it's head under it's wing and just stayed there. Nature in the raw is not always easy to watch but there is always a bigger picture to consider. If the bird dies then the Otter family or even the WT Eagle will get an easy meal to keep them going but there is always a chance that a bit of rest and a chance meal might be all that is required. 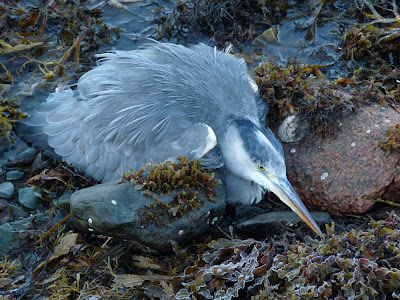 It's not for us to interfere, we should just observe. I have no idea of the outcome of this event as I had to leave when the female Otter swam into view and headed for the holt to tend her cubs although there was a young Grey Heron present in the same place the following day - who knows? Times are hard for all and the strong will survive. Most of the watercourses are still flowing but you can't really tell as everything is covered in a glaze of ice. 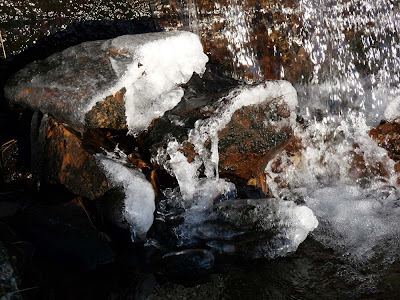 If you wait long enough by one of these streams you can just about guarantee a Song Thrush will put in an appearance somewhere close by. 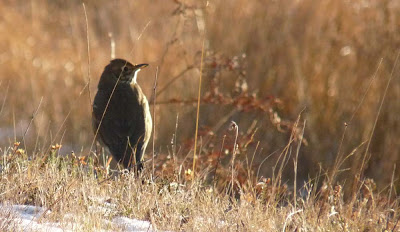 Thursday morning I checked the outside temperature - minus 8. Needless to say the water supply is now frozen. There's only one thing to do - go check out the wildlife! I picked up PS along the way and we went in search of a Red Kite that had been seen the previous day - not a sign of that but what a day we had. We started off with a couple of Buzzard, one Golden Eagle, one Whooper Swan, a couple of Goldeneye, 26 Tufted Duck and a Woodcock. We marvelled at the pack ice that was forming around the shores, we discovered that the Skylarks had been frozen out and the Snipe were a bit jumpy as they exploded out of the frozen marshland. The cameras had been quiet all morning but it was the Otters that brought them out. We started with a single, distant, Otter before we picked up a family of three.

The Turnstone, Ringed Plover and Golden Plover showed well outside the shop before we came across this Buzzard. 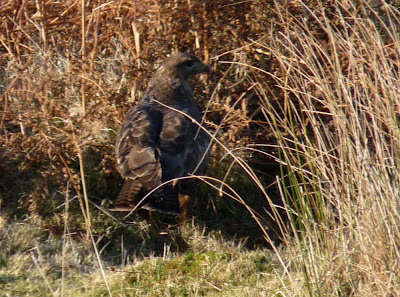 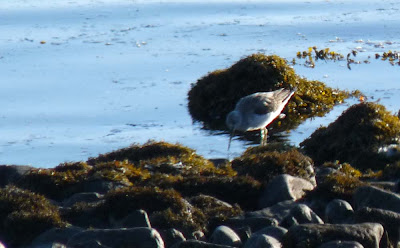 ...gave us our next Otter. Initially we drove past this bird but we reversed back to it to take a couple of snaps and just as we finished with the bird an Otter appeared just behind it. Cracking views of this one as it clambered out of the water, marked it's territory and then headed up the shore, through a culvert and then headed into the forest - amazing stuff! A 150 strong flock of gulls were partially grilled before being spooked - 3 Black-headed Gull, at least 90 Common Gull, 2 GBB Gull and at least 30 Herring Gull. The gulls all left but this flock of Oystercatcher just stayed put.

Another Otter viewed from above this time. Cracking views again before this one headed for the holt too. 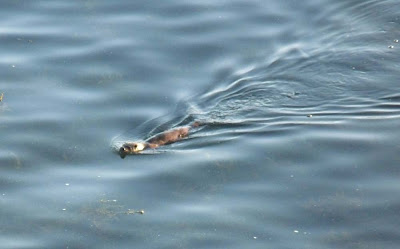 Our last stop gave us another three Otters in the same area that we'd seen this WT Eagle.

Thanks for all your blogs Bryan perhaps will not be so many now no guests but if you do lots of readers i think.Hope you have a nice holiday and my friend always went to Gambia but said most important thing was to always have plenty of bottled water and drink plenty of it to avoid dehydration and illness.

Cheers, Den. I'll still update regular - no worries there. Going to Gambia with regular visitors to that country so we should be ok.