Monday was a day of anticipation as the WT Eagles were due to hatch but I would have to wait until the end of the day to view them. We started the day well with a flock of Dunlin and 4 Whimbrel. A Grasshopper Warbler was heard reeling but wouldn't show itself but the Whinchats are not so elusive as they perch on the top of the vegetation to sing. An unusual sighting for this time of year were 3 Black-headed Gulls - not that interesting for most people but when you don't see many it was a good find! We had the usual sightings of Golden Eagle, Adder, Common Sandpipers, GN Divers and a couple of Otters before we viewed the WT Eagles. When we arrived at the nest one bird was sitting. The other bird flew in while we waited and we watched them change over. There was quite a bit of peering into the nest before the bird settled down so it looked good for a hatch. As we headed back I noticed the Butterwort was starting to flower so we had to stop for a photo. 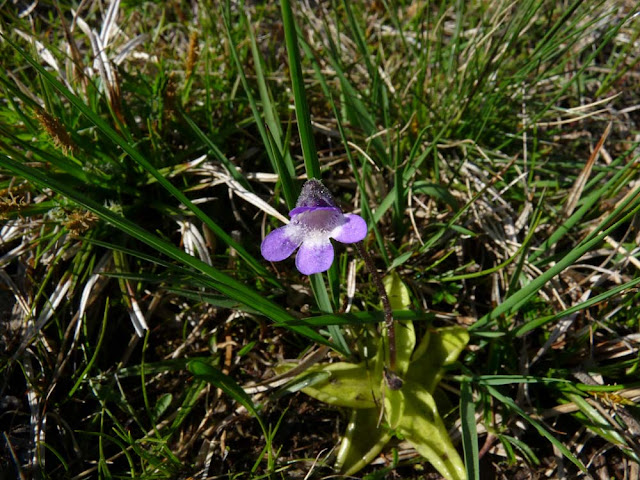 Tuesday and Wednesday we had a bit of a competition as I was taking a large group out over the two days. Tuesday was a cracking day with clear skies and a light breeze and we started the day with a cracking Raven, Eider, Ringed Plover and Common Sandpiper. It wasn't too long before we had an Otter in our sights which we managed to get quite close to as it hauled a fish out in front of us. More Eider were seen as we watched a couple of RB Merg, six Whimbrel showed well and the Oystercatchers are just stunning.

As we viewed the WT Eagles a Lesser Whitethroat was singing, a rare bird here, so we put the effort in to see this one - top quality!! It turned out to be a day of quantity as we picked up a lot of the small birds including Tree Pipit, Cuckoo, Whinchat, Goldfinch, Linnet. Raptors seen on the day were both eagles, Kestrel, Sparrowhawk but no Hen Harrier and we had a good finish with Golden Plover, Lapwing, Dunlin, Redshank, Mountain Hare and a flock of 60 Brent Geese.
Wednesday was another nice day with more of a breeze blowing. With the second group on board we started the day with a family of three Otters, cracking views of a GN Diver and a few Common Sandpiper in full display. We headed off to view the WT Eagles after that and were pleased to see the female bird standing on the side of the nest dipping her head occasionally to tend what I hope is two chicks. An attempt to get Golden Eagle failed but on return to the WT Eagle nest we were just in time to see the female fly as the male bird settled on to the nest. 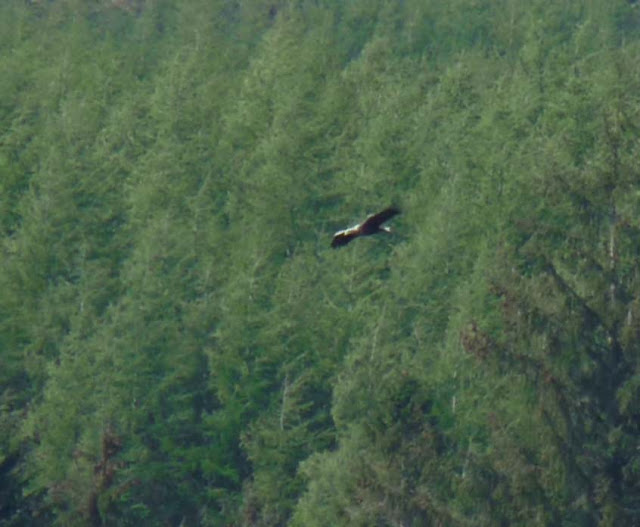 Another Otter provided an opportunity to get some photographs. 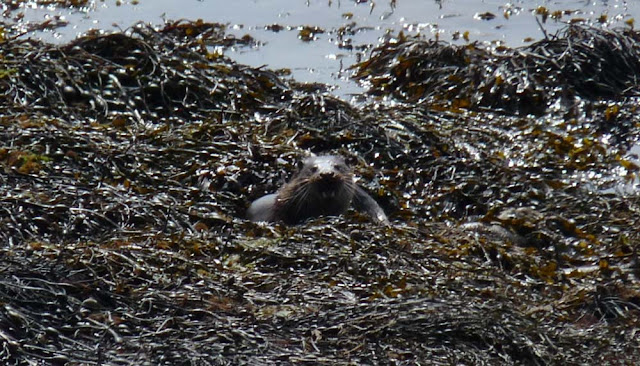 With the wind being stronger it was a struggle to pick up the smaller birds and our sightings seemed a bit sporadic. What we lacked in numbers we made up for in quality. A young Golden Eagle showed well... 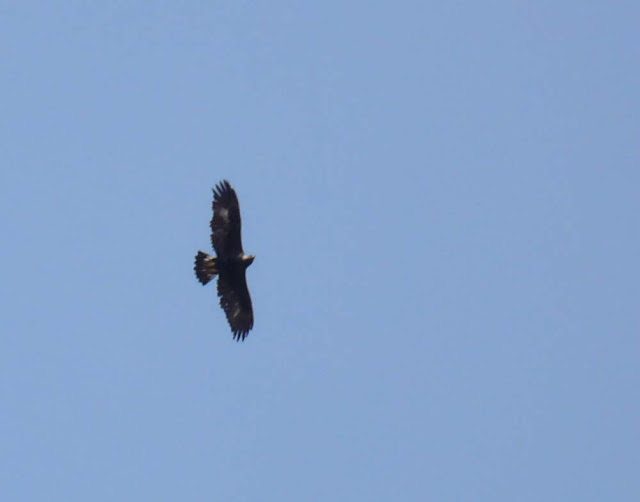 ...and two Ravens disappearing rapidly over a ridge gave away the location of another two adult Golden Eagle. 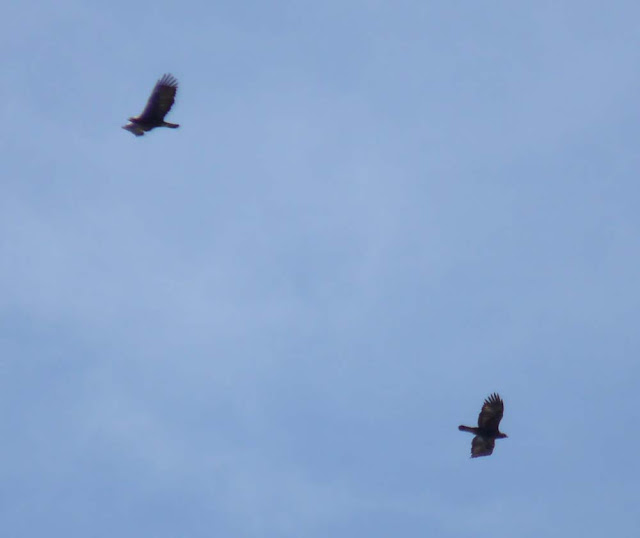 A round up of the flowers and good views of Adder were had. It was nice to see the Bluebells coming into bloom too. 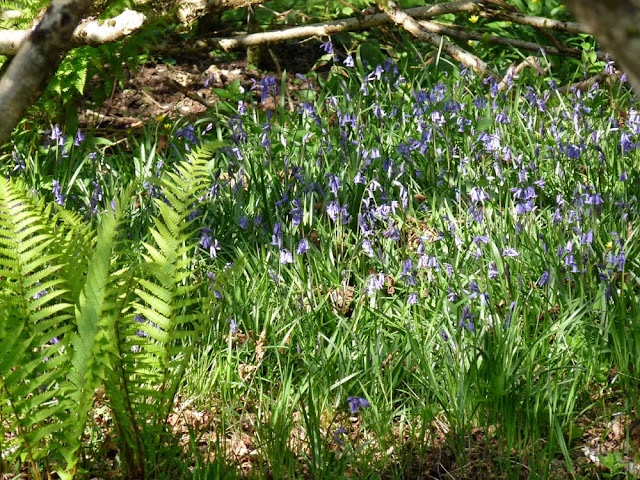 We followed this up with a stunning view of a male Hen Harrier as we headed for the beach. Another excellent finish to the day as a Peregrine attempted to take one of the Dunlin we were watching, a couple of Whimbrel were seen, good views of Mountain Hare... 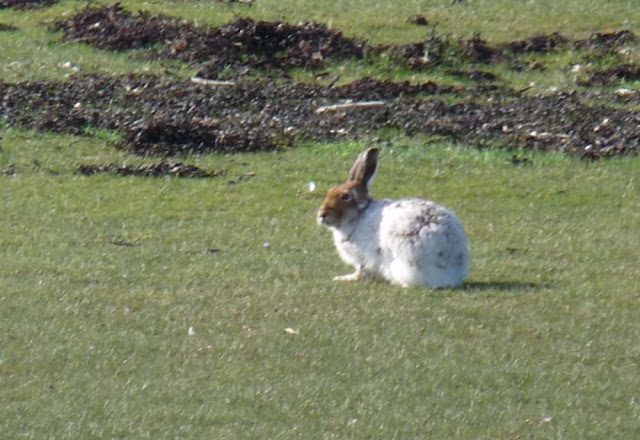 ...and another male Hen Harrier just as we were heading back! Two really different days but both were excellent in their own right - we had almost 70 species on the first day and about 60 species on the second day!
Posted by Bryan Rains at 09:33

Yes two really good days Bryan and pics for us to enjoy,thanks.