Friday afternoon saw me chasing shadows. A report of a White-billed Diver on my patch had me charging down the road to try to cast an eye over said beast. Three minutes down the road had me on site and scanning the sea to no avail - 2 sum plum GN Diver and 1 pale billed winter plumage GN Diver. Did someone make a mistake or was I too late? It doesn't matter either way really but it would have been nice! As I returned to base there were two female Hen Harriers quartering the marsh - a nice pick me up.
Today was forecast to be showery and boy were they right. We started off viewing the WT Eagles - both birds at the nest and eventually the female taking flight and flying off. Next on the hit list were these 3 Red Deer hinds grazing at the edge of the wood. The winter coat is starting to fall away so they all look a bit rough. 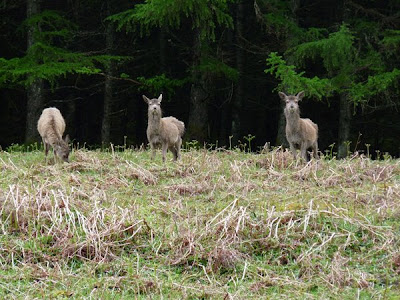 The heavens opened so we made a dash for it and took shelter till it had passed. A GN Diver kept us focused as it floated along preening before heading off on another feeding foray. Nice views of Curlew, Eider, Hen Harrier and Grey Heron were had before we picked up a mother and cub Otter. A quick view for everyone before moving to a better position and superb views were had before the next torrential shower moved in - off we went again.....Golden Plover, Wheatear, Lapwing and then a rest. Two WT Eagle at the next stop, one adult male.... 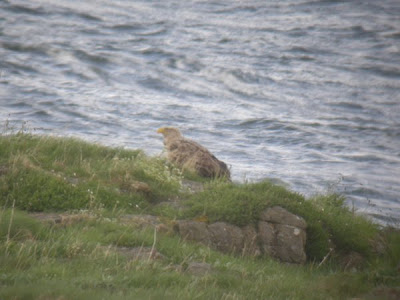 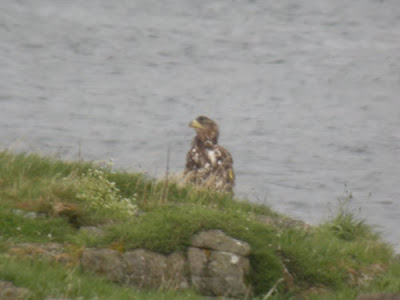 After that it rained a bit just for a change. A couple of Cuckoos were seen chasing each other about - a great sighting. We also heard a Common Whitethroat today so I was well pleased that they have arrived at last - first one last year was on 2nd May and the year before 29th April.

The rest of the afternoon was quite sunny although a bit breezy. Great views of Skylark collecting nest material, Linnets foraging, Ringed Plover exploding out of nowhere and the Lapwings have finally hatched. We still needed Golden Eagle for the day so we headed off to a hopefully successful spot. On the way we noticed a shower that was passing through and we were stunned to see the strange effect - it was more like the Northern Lights than a rainbow. The photo doesn't do it justice either. 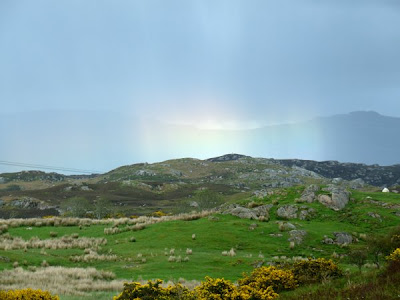 It eventually disappeared and then reappeared in a more familiar form....... 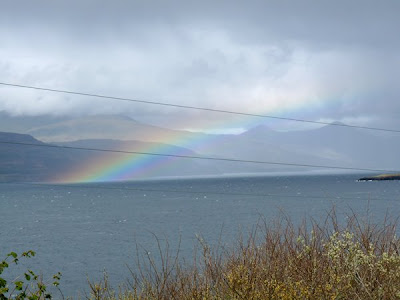 Golden Eagles were eventually located to the delight of the guests and we headed off for one more scan for Otters. We were in luck again - 3 Otter this time but the light wasn't great so we moved along just in time to see the family climb out a pose on the top of a rock - superb.
The last photo needs no explanation but who can resist it - cracking birds. 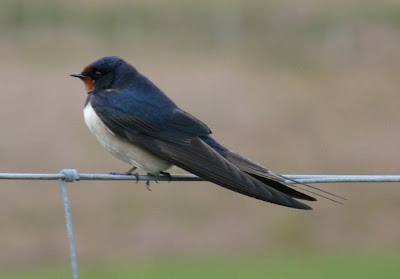