There is nothing worse than misinformed comments (but I could be misinformed).......
'I used to be able to shoot Mountain Hares anytime but now they are hard to find because the WT Eagles are eating them all' - obviously shooting them doesn't reduce the population.
'The WT Eagles are taking over the Golden Eagle territories' - Goldies chase the WT Eagles away and their hunting habitat is being reduced by forestry (that doesn't count though) which reduces the Goldie territories.
'Magpies/Sparrowhawks are responsible for the reduction in songbirds' - what are these predatory birds going to do when they've finished eating everything, I wonder, perhaps they'll turn cannibal?!
'Reintroduction of species upsets the natural balance' - I love that one - no balance was upset by the initial eradication of the species, I guess!
Rant over.
A stunning day today with nothing to do but enjoy the day - it's great when your day off coincides with nice weather. I had an hour out this morning to attempt some Golden Eagle photos. I located one bird sitting on the ridge so I digiscoped this bird on maximum everything with naturally poor results! 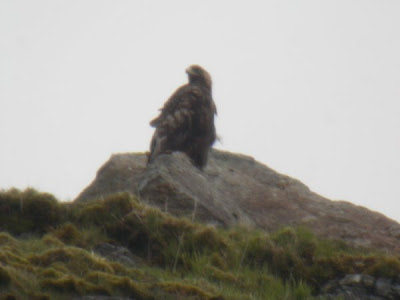 It turned out to be the male bird as the female came shooting over the top nearly bundling this bird over. The birds clattered together, I could hear the clapping of the wings as they came together, and he was sent on his way like so....... 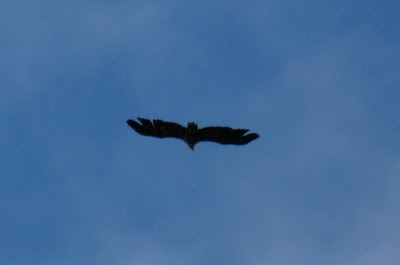 The female disappeared back from where she came and he flew off down the Glen so I moved off too. On the way down the road I could see a Buzzard sitting in the top of a tree so I snapped that too. 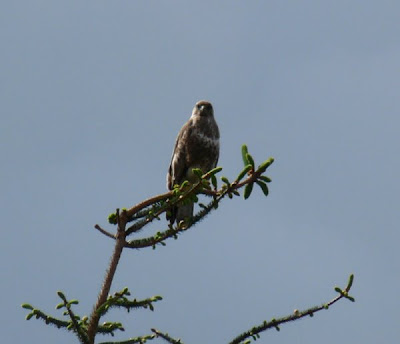 The next stop was for a quick look at the Otters if any were on show. No problem at all with those as mother and cub were out fishing together. Not ideal for photos so I left them in peace. Back home for a cuppa then a few jobs to do while waiting for an old friend, Andy, to turn up. When Andy finally arrived with young Julian in tow we set off back round the loch to see if any Otters were still around. We hit lucky straight away with the mother with 2 cubs. Julian was pleased to get a view of all 3 as they climbed out on the rocks - superb.