I did a count of the GN Divers on the loch on Monday and 30 birds was the best I could manage. A single Common Scoter was notable. Strange how you don't see any other Divers near these birds.
On Tuesday we had a group of 10 Whooper Swan drop in for a rest. As with any long journey it has to be broken up and a few tales told along the way. A perfect example of this is shown below...'I tell you, it was this big' and his mates in various stages of disbelief! 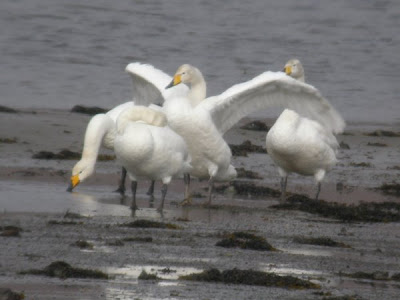 Yesterday was a superb day out, a couple of year ticks and some good sightings. I started the day down at the farm taking in the WF and Barnacle Geese which must be getting itchy feet by now. Good numbers of Wheatears are starting to appear now but the Golden Plover flock seemed to down to about 30 birds. It's rarely the same two days in a row so these fluctuations are always interesting. I looked for the 3 Golden Eagle that I had seen previously but there was no sign other than a large bird disappearing over a distant ridge - not enough of a view to clinch it.
A roadside stop to enjoy the view out to the Treshnish Isles was perked up by the appearance of a White-tailed Eagle that flew straight overhead at reasonably close quarters. It was watched until it disappeared into the distance.
The weather was overcast and a bit chilly in the morning but we could see a clear spell coming just in time for lunch. A Golden Eagle was sitting on the ridge as we arrived at the lunch spot but it looked comfortable. It wasn't to last as a Raven appeared alarm calling and heading for the Goldie. He appeared to be flying past the Eagle but he was looking for a tail wind to get some extra speed for the first attack - cracking stuff! The Raven was persistent enough to move the Eagle from his 'easy chair' but he dropped into an area that we couldn't view. The Eagle obviously found a better place to avoid the dive bombing as the Raven continued the attack for quite a while. There was a distraction after the Eagle disappeared when a Hen Harrier put in an appearance and proceeded to display with gusto. Naturally they don't do this display for nothing and it wasn't too long before another bird put in a brief appearance. I checked on the tadpoles today and they still have quite a pool to live in for now but I wonder how long before it dries out. With the sun out it was a good time to look for Adders and we weren't disappointed with one on show and also my first Slow Worm of the year - cool. 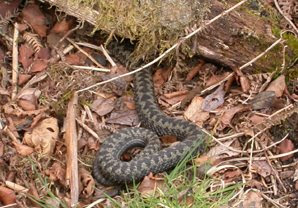 Loch Scridain was reasonably productive with Eider, GN Diver, RT Diver, quite a few Razorbills and we managed to pick up the Common Scoter too. When we arrived at the shop I had a quick scan around with the scope and picked up what I thought was an Otter. I wasn't wrong with the ID but there was actually 3 of them together. Before we could even think of getting round to where the Otters were the Gulls started making a ruckus - eyes to the skies - 2 White-tailed Eagle flying over - you don't know where to look. The WT Eagles drifted off in opposite directions so we headed for the other side to get better views of the Otters. It turned out to be a mother with two cubs - fantastic. One of the cubs was still a bit unsure of itself and spent most of it's time on land squeaking for mother. It did manage to get a couple of crabs but it's sibling was out there catching fish. It'll learn eventually. Here is a photo of the elusive 3 headed Otter.

On the way back round the loch we bagged a couple of Sand Martins which was the second year tick of the day.
Posted by Bryan Rains at 15:03

Excellent blog Big Yin. Your photo's are a real joy. I go to Mull each year with my mates, this year will be our 6th on the trot. It is a fantastic island and your blog is a great reminder of what we have to look forward too. Will be over in early May this year, may well bump into you on our travels. Keep up the good work.
Mal