Saturday was another stunning day for the wildlife and also for the people watching of course. The previous day's glut of waders at Fidden were probably still around but the Golden Plover flock was fragmented, the Dunlin were just doing laps and I couldn't find the Blackwits. Skylarks were just begging to be looked at - flying by at eye level, running around your feet etc. The Lapwing is still sitting on three eggs but I'm thinking they won't hatch after all the rain - the nest must be cold and damp by now.
We picked up our first Otter of the day in a sheltered bay but it was a bit distant but we were anticipating better views later in the day. It's always nice to get a view of one though. Lunchtime was rapidly approaching but with what you would consider perfect conditions for raptors flying they were surprisingly thin on the ground. A Raven alarm calling gave us a bit of hope but we couldn't see the Raven or anything that would upset it. A short drive later and there was a Golden Eagle being pursued by an angry sounding Raven - result! It was over the ridge before any photos could be taken but we were heading in the right direction. We managed to find another Golden Eagle quite high up before the original bird came back into view. It was a bit distant for the camera but gave stunning views through the scope and a reasonable photograph. 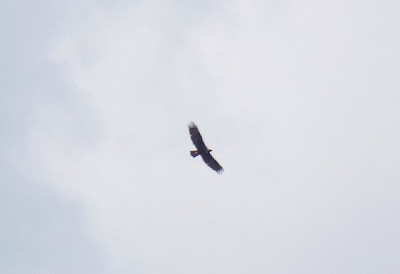 We got a cracking view of a male Hen Harrier while we were demolishing the lunch and my first view of a Dipper this year. One of last years young Adders was sunning itself on the path but I'd left the camera in the motor - fool that I am! Another Otter was picked up in Loch Beg but it managed to give us the slip so we moved on to the WT Eagle. There were 2 WT Eagle in flight with a Golden Eagle in close company with them. We attempted to get closer but it wasn't to be. As we headed back we picked up an Otter settling down to sleep on the shore so we watched for a while. Just as were getting ready to move on the female Otter with 2 cubs hauled out right next to the dog!! That held us for another 20 minutes while we watched the four beasts alternately fishing and wandering along the shore - absolutely stunning!
On Sunday we'd opted for a day out so we could go to Staffa to have a look at the Puffins. A nice boat ride out on a packed boat didn't produce very much at all but it's the Island itself that produces the goods. 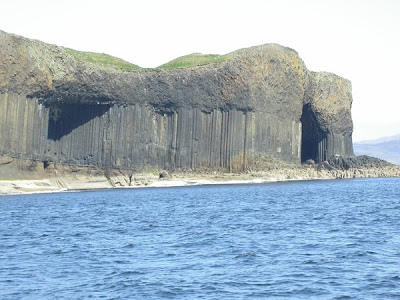 A single Black Guillemot flying off as we approached Staffa was nice to see and the nesting Fulmars are a welcome sight. You could see the Puffins on the sea as the boat approached the landing stage. We landed on the Island and headed straight for the Puffin colony after recovering for 5 minutes from the run up the steps! We were jollied along the way by the numerous Twite and Meadow Pipits and had cracking views of 2 Ravens enjoying the breeze along the cliffs. We settled down at the Puffins burrows to await their arrival so I tested the camera out on the Fulmars in flight. Not an easy job by any means but I'll get into the settings of the camera at some point which might help! 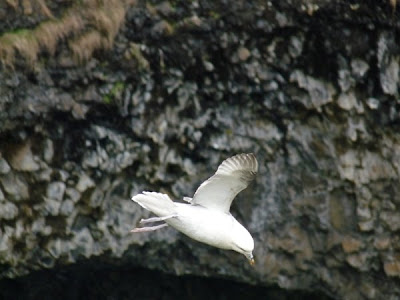 The Puffins were edging ever closer to us and starting to fly around from their watery starting point. A Great Skua gave a brief fly over view but didn't deter the birds from coming to the burrows. After about 15 minutes of waiting we had our first Puffin at our feet - stunning. Most people had headed for Fingal's Cave and the rest of the folk had walked further on so we had these birds to ourselves. The camera was kept very busy and I could post a dozen or so shots but one will do the trick. 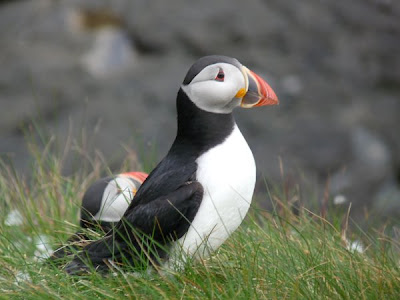 We did have 2 birds appear from a burrow that had been busy refurbishing - muddy bills and dirty chests made a change from the pristine birds. All too soon it was time to leave but I'll be back out there again later in the year when they have young to feed.
Posted by Bryan Rains at 15:43