You know the old saying about buses - you wait for ages then three come at once - well it was a bit like that yesterday while out on tour. We got off to a good start watching the White-tailed Eagles doing a changeover on the nest then it all seemed to go pear-shaped. Plenty of activity but not a great diversity so good views of Buzzard flying around, lots of Oystercatchers and Common Gulls but no sign of Redshank, Greenshank or Otters. Cracking views of Meadow Pipits chasing each other around, a single Goldeneye, 2 Eider close in, 5 RB Mergs and then nothing. Just when you start wondering where missing wildlife is it all comes back to life again. An Otter was spotted asleep on a rock with two more in the water not 20 yards away! Naturally we spent a bit of time watching them and eventually had all 3 together on the rocks.
Lunchtime was much the same with a Golden Eagle picked up almost immediately only for it to drop out of sight before anyone else saw it. It made another couple of brief appearances before finally clearing the ridge with another bird in tow. They were always distant but prolonged views meant everyone saw them in the scope. We thought the show was over when they disappeared but how wrong we were. Three Golden Eagles appeared from a closer ridge and proceeded to give excellent views with two youngsters chasing each other about and an adult bird displaying. The youngsters didn't seem to notice the adult bird so a show of force was necessary. The adult bird gained a bit of height and came diving down to the youngsters with talons out. It certainly scared the hell out of the Buzzards as at least 6 of them appeared from the trees trying to get above the warring Eagles! What a sight.
There was no way of topping what we had just witnessed but another Otter was a surprise find and the Mountain Hares showed well. Stunning views of the Lapwings and a couple of Golden Plover kept us going. Best sighting of the day had to go the Skylark that did a slow fly by at head height, singing all the way, then landing right in front of us - stunner. 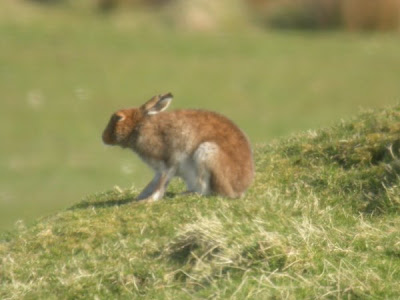 I finally managed to clap eyes on the Willow Warbler this morning and I thought I'd try for a photograph - fool that I am! I've been after it all day and I've had stunning views but not a single photo was taken. Scanning the ridges in between bouts of trying to snap the Warbler was quite productive with 5 Golden Eagles, 1 male Hen Harrier and an adult White-tailed Eagle straight overhead. So the only photograph I got today is shown below and it's not a Willow Warbler!! 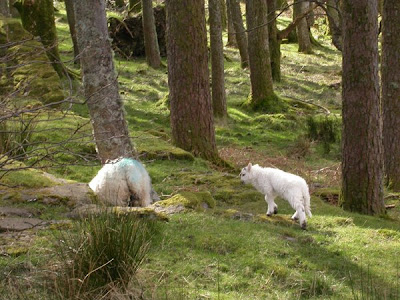