I took this first photograph on Thursday just after lunch. It's a marvellous shot of the tadpoles revenge. When the taddies hatch out the newts emerge to feed on them and this newt has popped it's clogs so the taddies get a nice meal! The only problem is that the wee pool they are in will dry out soon so that'll be the end of the taddies too - it's a cruel world. 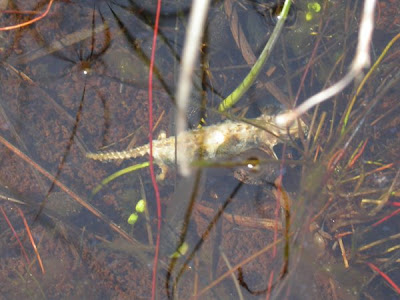 On a lighter note I found my first migrant Common Sandpiper on Thursday having previously seen them in Devon in January. White Wagtail were out in force too with at least 6 down at Fidden - very smart looking birds they are so the camera will have to come out at some point.

I had a quick look round Loch Beg this morning to see what changes there are. The Redshank have reduced in numbers with only 6 found but Greenshank are up to 4, the 2 Shelduck are still putting in appearances, the Ringed Plover are difficult to find but still present and the Ring-billed Gull is still here. The Eider numbers are creeping up with at least 10 today and very photogenic. Plenty of aggravation going on with the females seeming to instigate most of it. As you can see this Eider has found a jet ski to impress the ladies........ 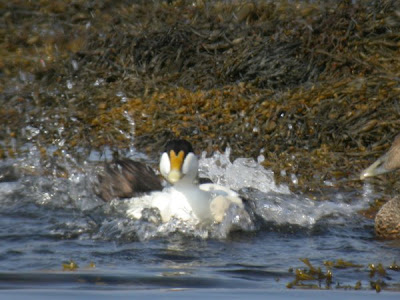 After all the pushing and shoving they get tired and haul out in a huff - it doesn't look like anyone is speaking in this shot! 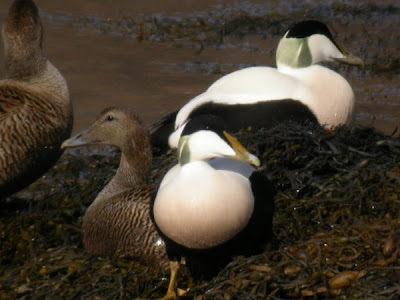 Just around the corner from the Eiders I stumbled upon a pair of Grey Wagtail that were collecting nesting material. It was all a bit gruesome to watch as they wandered in amongst the bones of a dead sheep pulling out bits of wool. Much better to see the pose on top of a rock! 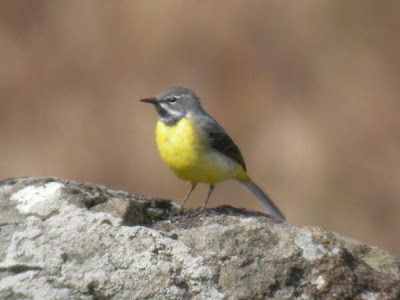 I had 2 GN Divers nicely lined up for photos and got distracted by a Willow Warbler for a couple of minutes - no sign of any Divers when I looked back! You can't have a trip around the loch without looking for Otters and it wasn't too long before I had one hauled out on the rocks with a fish. A cracking view through the scope but the heat haze coming off the grass in front put paid to any ideas of photos.