Thursday had been forecast to be very wet but when the day dawned it was nothing like it - sunny with a bit of a breeze. The guests hadn't even arrived and I had WT Eagle sitting on a ridge and a Golden Eagle soaring over another ridge - hurry up people! The guests arrived and managed to catch up with the distant birds. It was certainly a day for raptors with 3 WT Eagle, at least 6 Golden Eagle, 6 Hen Harrier and the usual supporting cast of Buzzard and Kestrel. This cracking Yellowhammer was posing in the sun. It's not a rare bird here but they can be difficult to track down. 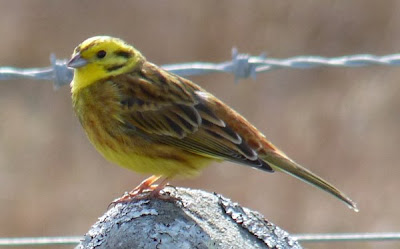 Thursday evening saw us heading for Tobermory to visit friends, have a meal etc but a good chance of Short-eared Owl on the way kept the pace steady. We weren't disappointed as we crested a rise the unmistakable shape of an Owl was sitting on a post.......not a bad effort! 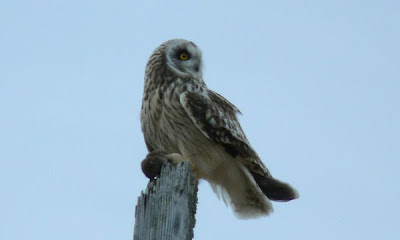 Friday was an absolute stinker weatherwise - overcast and raining all day. Not the best conditions for photos but always exciting for birds at this time of year. The guests were enthusiastic despite the weather and we went for damage limitation making the best of a bad one - boy, were we surprised! 64 species seen on the day with some nice surprises along the way. We got Otter and WT Eagle early in the day with good views of a few GN Diver. The loch was reasonably calm so it wasn't too long before we had Black-throated Diver on the list too. Black Guillemot was a requested bird for the day and we managed to find one bird amongst the Razorbill and Guillemot - they can stay down for quite a while so it was a patience game with that! Best sighting of the day had to go to the Cuckoo that was being mobbed by a Stonechat. The Cuckoo had the regulation large caterpillar hanging from it's beak and the Stonechat spent a lot of time trying to sit on the Cuckoos head - superb. Poor light and distant for the camera was never going to produce anything good but here is an action shot anyway.... 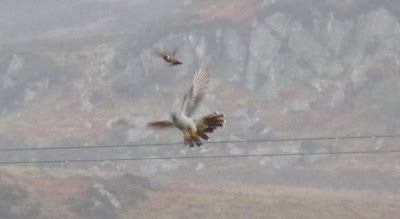 We saw 3 summer plumage Red-throated Diver, 3 flyby Dunlin and a male Hen Harrier on our travels but the best was still to come at Fidden. A great selection of birds and an Island tick for me. We picked up a Mountain Hare in a field and we'd noted the flock of birds present too. The Scope was set up to look at the Hare and scan through the 300 Golden Plover. Amongst these stunning birds were a few Dunlin so we set about trying to get a guesstimate when all of a sudden they were off - there must have been about 50 Dunlin there. We drove on and located a flock of Curlew type birds in the distance - careful approach revealed it was 15 Whimbrel. They were obliging so I nabbed a shot. 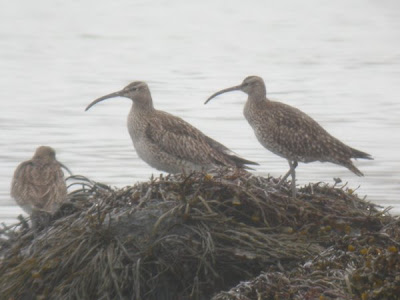 We decided to take a tea break to see what else was around. The Plovers and Dunlin were doing regular flying displays and a couple of Mountain Hare were encouraging the cameras to come out. A shout went up for Black-tailed Godwit flying above the Golden Plover. Sure enough there were six birds.......nope there is another flock approaching...they headed in our direction giving a superb flyby before settling in a field. They seemed to increase every time we looked so 28 was the final number of these birds. A couple of the birds were colour ringed but I could only get the rings on one bird. It's been submitted so I'll post the response when I get it. A Purple Sandpiper was picked up minding it's own business on a distant rock but this was my 'Mull tick' for the day - tremendous. We stalked the Mountain Hare to get some shots for the 'big camera' guys - got them down to 5 yards so another result. A fantastic day all round, I'm sure you'll agree.
Posted by Bryan Rains at 07:58

Looks like you're getting the hang of that new camera. instant improvement. As I said before it's all downhill from here