I'll get the B Team out of the way first - F1 on Sunday was fantastic. Button, Barrichello, Brawn and Branson (wonder if the crew's names all start with B too?) had a cracking day with Button taking his first win in a while. Congratulations to Brawn GP! Now for the other B (ird) news....
What a weekend that was! Friday was a waste of a day with a strong Northerly wind blowing which had us wondering if the caravan might blow away! It didn't so we're happy. The wind was still pretty fierce on Saturday morning and forecast to die down through the day. Saturday afternoon was like a Summers day, in comparison, and the birds were out to prove it. Four White-tailed Eagles soaring above the shop at one point and checking round the ridges produced another one with a male Hen Harrier not too far away. The Golden Plover flock hasn't increased any but they are looking splendid in their Summer dress.
We had the stick makers dinner on Saturday night and although we didn't win anything I did get a second place for a matching pair. 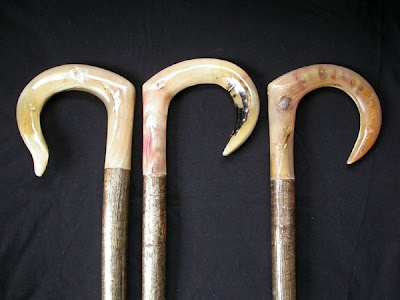 Sunday was a day of two halves with pleasant weather in the morning so a quick scoot round the loch to see what was on offer. This male Wheatear gave a brief opportunity to get a photo and the first one I have photographed this year. Only one Otter on the loch this morning but easy enough to find. The numbers of RB Merg are on the increase with at least 10 present.
We had lunch near the Seal colony and so did a Herring Gull. There were two Shag fishing in the shallows and one of them came up with a fish which the Herring Gull promptly stole!! Anything for the easy meal. 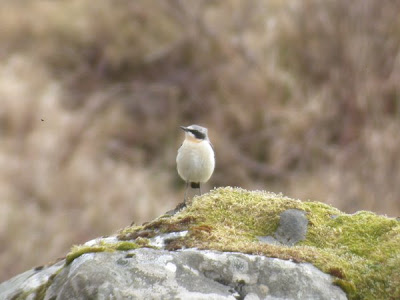 My Leicas are fitted with a special Northern Wheatear cloaking device that renders them invisble to my eyes, that's the only reason I am the only birder left on these islands without one on my year list.

Crikey Alan I can nearly see your Wheatears from here!!

I assume the stick dressing is the only way of avoiding the other pastime that produces way too many kida on winter nights? I'll have to give it a try.

That should say kids, I suffer from Italiexsyia which is a tendency to type with an Italian accent.