I was up with the larks this morning as the forecast was ideal. I'll not bore you with the view from the door this morning as there are enough photos of that for now and some nice ones in the rest of the post!
The Lochs were flat calm this morning so it was ideal for spotting things without trying too hard. Loch Beg gave up an Otter across the far shore and as it was freezing cold all the equipment fogged up so no photos of that one. Another mile or so down the road and another Otter heading for the near shore but out of sight! I could see bits of movement but not all of the beast so I was going to move on when a head popped up to see what I was up to. I waited....and waited....and waited until it was time for more breakfast. 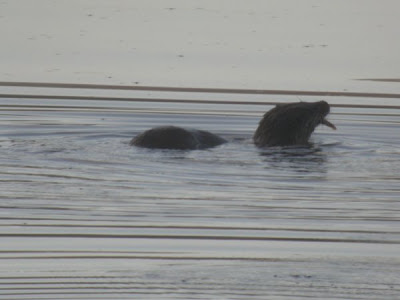 I called in on a pair of White-tailed Eagle and I wasn't disappointed as both birds were sitting side by side - ain't that sweet? No photos of the Eagles but this Kestrel will make up for that. 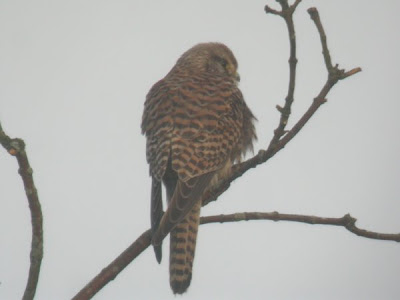 A Black-throated Diver was next on the hit list and he was playing hard to get. A bit of perseverance got this shot. The usual suspects were around but nothing photogenic. The Black Guillemot numbers seem to be rising daily or it could be the summer plumage is easier to spot. A total of 4 RT Diver today with only the one in summer dress. 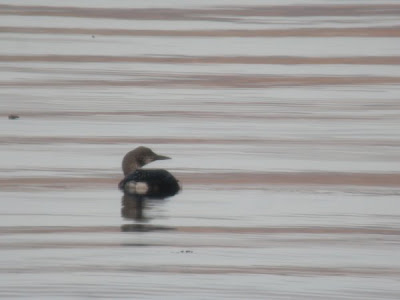 Another Otter was making a bee line for the rocks not too far away from me so I set up an ambush and got a nice shot as he crested the rise. Only one shot as he went straight back in the water - digiscoping is great for things like that! 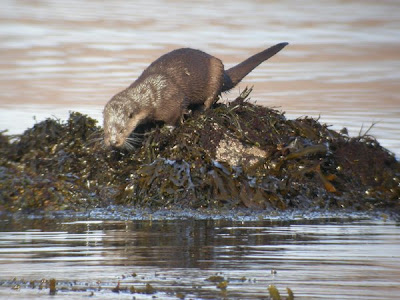 I did get a nice profile in the water though. 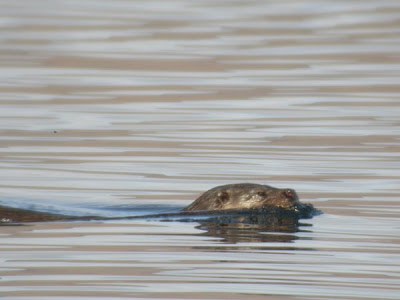 As I was heading for my next stop a juv WT Eagle was flying in the opposite direction - cue handbrake turn and back down the road. Sadly it landed out of sight and despite trying from a few vantage points it had found the ideal hiding place.
I've been trying to get back to the Adders for a while but with the poor weather it's not been worth it. True to form with a bit of sun there's always one on show and he was well warmed up. It was a careful approach as I didn't want to disturb it. 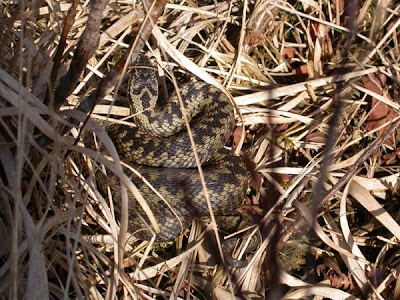 I had a walk around to see if there were any more but it seemed he was the only one. The waterfall was looking good after all the rain and a Golden Eagle was patrolling the ridge in the distance. A strange one that I did see near the waterfall was a hovering bird with little or no tail. A look through the bins gave up the Kestrel but it sure looked strange without a tail! 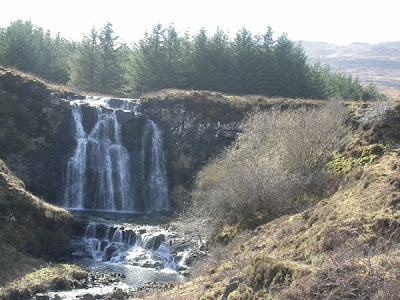 I checked the few pools in the area for frogspawn and it was there but not in any great mass. You can see the frost damage on this clump but the rest of it is quite far on with half grown tadpoles already - marvellous! 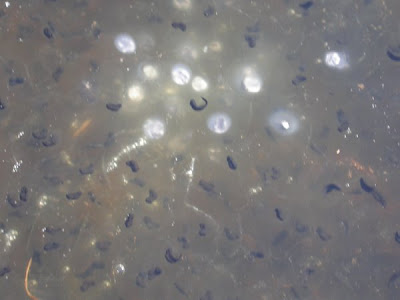 I checked out the Common Seals on the way back and counted at least 70. With the wind blowing in my face it was carrying the sound of the seals moaning with the odd call from a GN Diver out on the Loch - very atmospheric. A check of the distant ridges here produced another Golden Eagle. 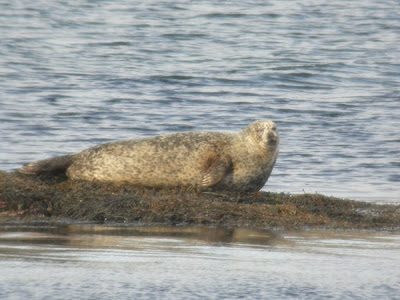 No real changes with the numbers of birds on Loch Beg at the minute except the arrival of 2 Shelduck and the Rock Pipits have started their parachute display flights. I just need a Wheatear to say it's Spring!
Posted by Bryan Rains at 14:18

GOOD NEWS
I've just heard that the Sun newspaper is looking to take on a new headline writer, when I saw the title of your latest entry I thought of you immediately

Managed to track down one of your type of birds today with a very distant view of a LT Duck. Going to try and get some white wing gulls as well as i'm off this week.

How long will the G-eagles be displaying for now as i might have to travel across to haweswater to get a fix?

Cheers Bob but I think I'll stick with the day job!