I'll start off today with a couple of blogs I've added to the list. Firstly, Newton Stringer and his pain over a Siberian Thrush in Norfolk had me in fits this morning. I hate the night before thing and I usually bite the bullet and just drive! Secondly, Kitchen Window Birder who resides in New England - top quality garden birding and a definite show of 'the grass is always greener..' Urban Birder eat your heart out. Check them out.
Now for the gathering and we'll start with the weather deciding to dump a whole heap of snow on us overnight that just as quickly disappeared. This was yesterday morning.... 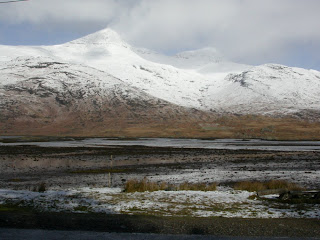 We have a lot of Kestrels on Mull but the antics of the local pair screaming around every morning have been a treat. Over the last couple of days there has been only the male bird so I wondering if the female has decided to settle down early this year. This was taken yesterday morning. 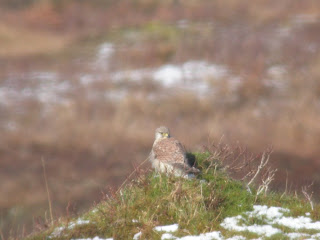 The Hen Harriers have been noticeable by their absence over the last week but that's probably more down to me not looking while they are hunting. They do cover a large area though and can be found hunting the tops of the hills when you can't find them on the marsh. Yesterday evening produced 2 birds, both ringtails, in close proximity and I followed this bird as it headed off with a purpose. It wasn't long before it settled down but a bit far for the photo. If the photo opens you can see the facial disc on this bird as it watches the Hoodies flying past. 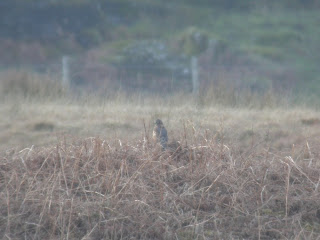 Talking of Hooded Crows there was a real gathering this morning. I picked up 4 birds that were having an argument about who was the loudest and by the time I had the camera on the scope there was 14 of them. The birds roost in the wood and we regularly see 25 plus either going to roost or coming out from the roost. They are always a treat to watch as they try to mug anything that has food. They'll gang up on an Otter, or Eagle for that matter, and do some very distracting tail pulling so someone can grab a morsel so I wonder if this was a muggers meeting.
'Who we gonna get today?' 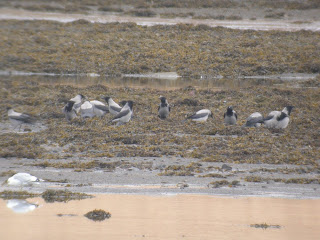 I could see a tribe of Goosander across on Loch Beg so a trip round to get a closer look was in order. By the time I got round there was no sign of them - typical. I did manage to see this Otter who was eating a fish on the shore and as soon as he finished in came a Hoodie to see if there were any scraps. Here he is scampering over the rocks. I hope these photos open up!! 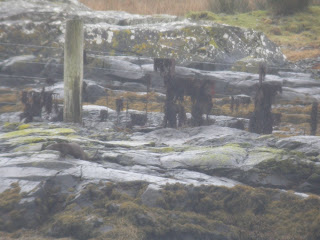 The 5 Goosander were hiding on the near shore right under my nose. The equipment was set up and as soon as I got them in view the battery gave up! There were 2 male and 3 females and I managed to get three of them in one shot as they headed out to the middle of the Loch just as the rain started to come down again. 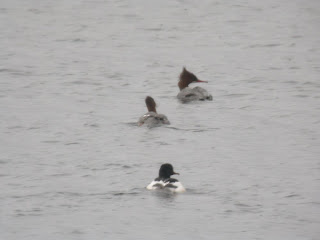 I headed for home to get the battery on charge and then headed for Loch Scridain. Not a great deal to report from there with only 2 GN Diver within sighting distance and a few RB Merg and Shag. A very distant WT Eagle was sitting on the ridge across the loch just watching the day go by. This RB Merg seemed reluctant to mess up the spiky hair do so she must have a hot date tonight, it is Friday after all! 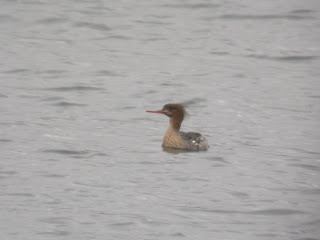 The weather is going to take a turn for the worse over the weekend so I think I'll be hiding away unless something good happens.
How come my pictures won't open? They used to and now they don't - it's got to be something simple but I can't see it!
Posted by Bryan Rains at 13:45