As promised I made an attempt to count the GN Divers on Monday evening and failed miserably. The loch was very choppy and it was almost dark but I was gifted with a juv White-tailed Eagle flying over and also a Pipistrelle Bat.
St Patrick's Day was a day spent with guests and I got a flying start with a stunning male Hen Harrier. We managed to get a good tally of 50 species of birds throughout the day with nice views of the White-fronted Geese (32) and cracking views of the Skylarks, Lapwings with a couple of Common Snipe zig-zagging to keep us on our toes.
A distant view of 2 Golden Eagle whetted the appetite for closer views and a close female Hen Harrier was photographed but not by me! I've got to get one of these Lumix FZ18's. Male Sparrowhawks seemed to be out in force with 3 seen through the day but the entertainment prize has to go to the Eagles.
We picked up a group of 4 Golden Eagle youngsters that were building their aerial skills by dive bombing each other and talon touching. This was viewed over some distance but the spectacle was superb. We headed off for lunch when all 4 birds settled down otherwise we would have been there all day! I picked up another 3 Hen Harrier and a Golden Eagle at lunchtime but again distant views. With all this activity it wasn't going to be long before a White-tailed Eagle was on the list and sure enough I picked one up but again distant. This was to be the sighting of the day for me. The WT Eagle was initially on it's own as it cleared the ridge but another bird soon followed. They dropped in front of the ridge so we could see that these birds were not adults and I was stunned as they cleared the ridge again and got them in profile and they touched talons - it was a young WT Eagle with a sub adult Golden Eagle!! I'm doubting there was any animosity as it was the White-tail dropping down on the Goldie and normally you get the Goldies chasing off the White-tails. Who knows what was going on but it was a superb sighting anyway.
Another stop produced 2 White-tails a juv bird and a stunning adult that filled the view of the scope - could we take any more? Well we still hadn't seen an Otter so that was next on the list.......the photograph tells it all zzzzzzzzzzzzzzzzzzzzzzzzzzzz! We checked on this beast about an hour later and he was still in the same position. 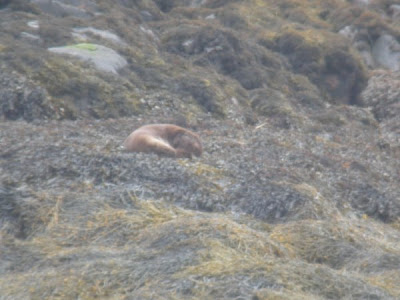 A visit to a WT Eagle nest site produced another surprise as a young bird from 2005 was standing on the nest! Obviously the owners of the nest were not in attendance so we waited for a while and eventually the youngster took to the air because...........the adults were returning. The adults were touching talons while the youngster watched probably picking up tips for later in life. A Common Buzzard joined the fray and proceeded to bomb one of the adult birds. A superb size comparison and great to see the Eagle flip over and show the Buzzard what it might get if it's not careful. They started to drift off but it wasn't over yet as 2 Golden Eagles appeared from nowhere and circled round with the WT Eagles! The WT Eagles touched talons and the male Golden Eagle was doing the stooping display - fantastic!!
Today will be different I'm sure but no less exciting so let's start with the sun up!! 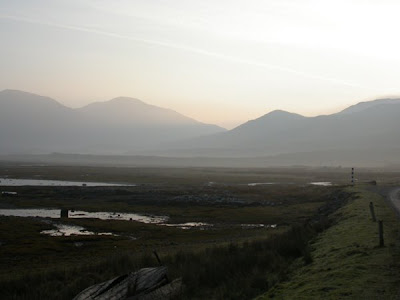