No sooner said than done!

Not a great day to be out on Sunday with a strong Westerly blowing and the prospect of rain but you have to do the best you can. Most of the tops were sporting 'woolly hats' that didn't look like they would be coming off through the day. I started the day down at Fidden which tends to be a bit clearer than the more mountainous parts. The WF Geese were in the fields for all of 20 seconds as our arrival coincided with the feeding of the sheep so the quad bike had the geese flying off and we couldn't relocate them. The flock of Barnacle Geese were showing reasonably well with a Canada Goose keeping company with them. A Mountain Hare was lying low in a natural form and an Otter was scampering around in the shallows looking for fish.
The 100 Golden Plover were still in the fields so I made the attempt of getting a photo of one of the male birds. The wind was howling which didn't help but this is the best of a bad bunch. 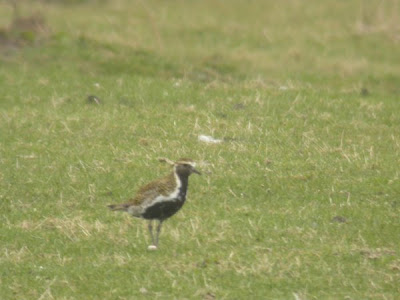 A very brief glimpse of a Wheatear was bettered a little later on with 2 birds (a male and female) keeping close company. Lunch was spent cloud watching more than anything else with the tops out of view more than anything else. A brief flurry of activity livened things up when a Golden Eagle cleared the ridge closely followed by a Hen Harrier. The Harrier was a male, flying with a purpose, that was joined by a female coming out of the forest and a food pass was made. The male headed off immediately and was joined by another female bird and eventually all 3 birds were seen together - result!
A group of 6 Ringed Plover at close quarters were nice to see and another Otter asleep on the rocks had me reaching for the camera but I achieved nothing in the strengthening wind. A GN Diver feeding close to the shore was nice to see but I wasn't going to be thwarted again so the camera stayed put. Grey Herons aplenty along the shoreline were favouring the more sheltered spots and the Primroses are now starting to flower in good numbers. Two White-tailed Eagles finished off a day of difficult conditions but it shows you can still have good sightings on a bad day.
Posted by Bryan Rains at 11:01