I had a chance to check out the GN Diver numbers on Thursday night before heading off to the stick making class. A tremendous sunset was a pleasure in itself but the 40 GN Divers that had gathered together was the treat that I been looking for. 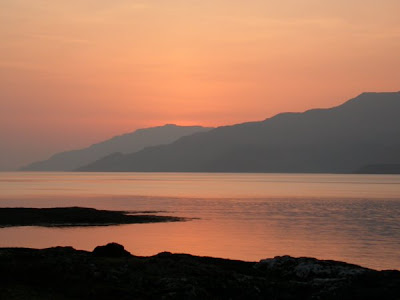 The run up to the class was fairly productive with 2 Barn Owls, 1 Tawny Owl and at least 5 Woodcock seen on the journey. Just as a matter of interest and a lack of Owl photos here are the sticks that we are busy working on. The smaller shiny crook is Little Yins stick and the 2 larger ones are mine and they should be finished next week in time for the annual competition at the end of the month. 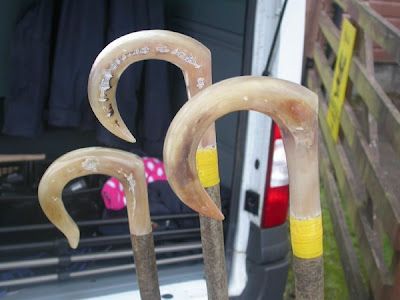 Yesterday was another cracking day with some interesting sightings through the day. A small group of 10 razorbills were absolutely steaming up the loch probably following a shoal of fish. It was great to watch the lead bird just tipping up and disappear like a sinking ship with the other birds following close behind. A Great Northern Diver showed very well feeding in the shallows but the camera decided that the hazy conditions were not the best for photos and wouldn't focus - drat!
Loch Beg was continuing to produce some interesting sightings with 2 Shelduck showing well, a female Goosander that was cruising the river outflow and an explosion of feathers that had to be the remains of a Peregrine kill. This White-tailed Eagle was posing quite nicely on the rocks and showing off his shiny yellow wellies, an essential fashion accessory up here! It was very windy at this point and the tag never dropped into a position where I could read it but it's a bird from 2006. 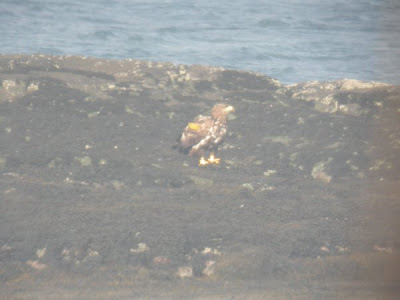 Two Adders were on show today but one moved off before I could get the camera ready. One of the things that always catches you out is stopping for lunch. You settle down with a cuppa in one hand and a sandwich in the other, your backside hits the seat.........and something appears.....drop everything and grab the bins for a brief view of a Golden Eagle reasonably close. The beast in question disappears so you go for the sandwich again then there it is sitting on the ridge with a Raven for company, sandwich down, the bird disappears, sandwich up, the bird reappears on the ridge again this time showing really well. I went for the camera but the bird was off again, I'm starving to death at this point and thinking about eating my lunch with my eyes closed! You can't do that though and a good job too..........over the ridge comes the Eagle and heads straight for us checking out what we are having for lunch......it's under 50 yards above us for a quick look before heading back to the ridge and performs a couple of stoops to show us who owns the territory here. We finish lunch, thanking the Goldie for the use of his garden, and head off. 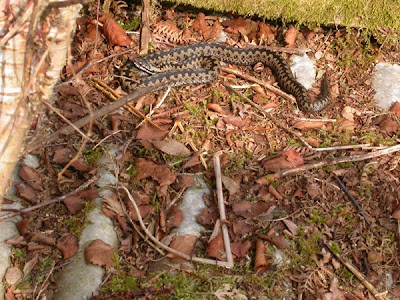 A few interesting sights down at Fidden with the Lapwings displaying furiously to each other. The birds flying around, black and white in appearance, the sounds of the calls and the whup, whup, whup of the wings as they race past is just fantastic. Then when they land they turn into into green jewels with one of the best haircuts around....... 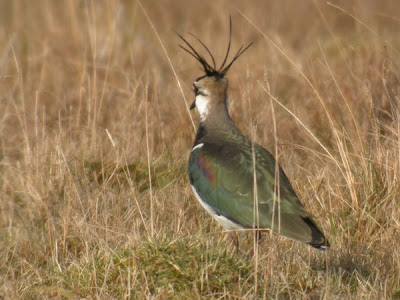 I'd been tipped off about the presence of a Northern Wheatear down here so it was a great pleasure to catch up with this stunning bird. I couldn't get a photograph and a verbal description wouldn't do justice so here is a shot of Northern Wheatear from a previous encounter. 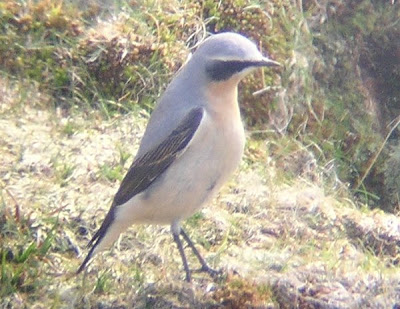 There were quite a few waders on display but the star of the show was a Common Snipe that was sheltering from the wind with just the head and bill on show. They had been heard calling at a few locations but this was the first one we had seen on the day. A flock of 100 Golden Plover were watched in flight then alighting in a field filling the air with their plaintive calls - superb. I hope I get the chance to get some photos before they head off to the breeding grounds. A Buzzard sitting on a post was the only chance I had to photograph something so here it is! 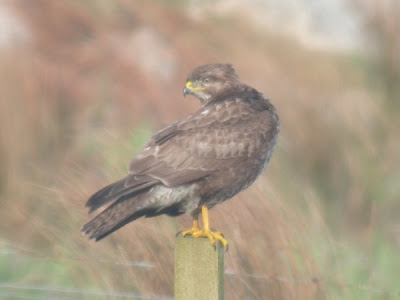 On the trip back to base we managed to add 20 Eider, 2 Common Scoter and a female Hen Harrier was a welcome addition to the list of the 53 species we saw on the day.
Posted by Bryan Rains at 12:07