I've not really made the effort to get out since coming back from the hols mostly due to some nasty weather so todays tour was just the ticket. We started off nice and gentle with some Oystercatchers, Hooded Crow, Buzzard and a few Common Gulls before banging in a couple of WT Eagle. Great Northern Diver was the next one to make the list with Slavonian Grebe not far behind. Three Otters performed superbly with the mum bringing a huge fish ashore and the youngsters giving us a close swim by. We'd spotted three swans in the distance but hadn't yet identified them so we drove a bit closer. As we got out the motor a Woodcock flushed from the scrub in front of us - excellent. The swans turned out to be three Mute Swan - not a common bird here so a good sighting. Little Grebe numbered five, a male Goldeneye, a spring of Teal and a few Curlew were added to the list before we viewed a few Red Deer. A quick look for Golden Eagle produced some nice stags, a Kestrel and a few Ravens before a shower of sleet moved us on. Another brief stop produced Siskin, Blue Tit, Chaffinch and a single Crossbill before we picked up a raft of Otters. An unusual sight of a mum with three cubs.

No apology for the quality of the photos as the light was poor. We cracked on to find the same two WT Eagles we'd viewed earlier sitting a couple of hundred yards apart. If I didn't know better I'd say they were keeping tabs on us. 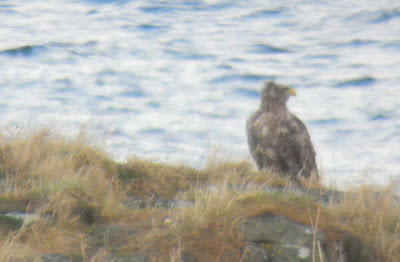 While taking that horrible photo we picked up another three Otters. The title of the blog - broad shoulders....Golden Eagle does it really well! 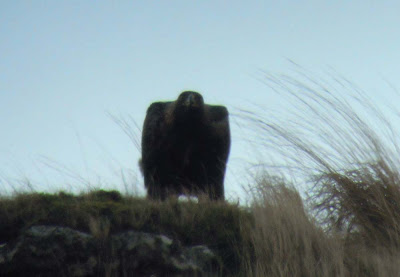 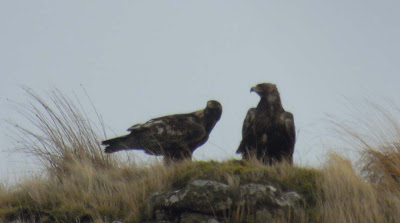 ...and coming in for a closer look at our lunch too. 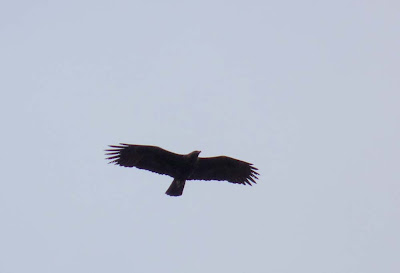 You can't have enough of this, can you? 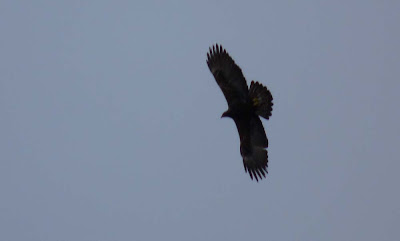 As the second Golden Eagle left the area we followed it down the road until we went our separate ways. A bit of a quiet spell followed all that action with Tufted Duck and Turnstone being the most notable of the new birds for the day. Greylag, Canada and White-fronted Goose were all seen well before we parked up beside three very obliging Skylark. A female Hen Harrier warmed things up nicely before we headed back for home. Amazingly the two WT Eagle we'd seen twice before were now cuddling up together - it could have been six for the day but I'll settle for two!
Posted by Bryan Rains at 19:22

Aaaaah...your photos from Gambia were brilliant but seeing these is like wearing comfortable slippers!!

Agree completely with Fiona,probably really comfortable because we are able to connect with Mull wildlife.