Sunday turned out nice again after the overnight rain. Once again, with some some guests on board and others to pick up, we saw an Otter out on a point of land. It was pointed out that there were two other people, with a camper van, watching the Otter that appeared to be naked! Bare shoulders and bare legs could be seen as they stood behind the open door - thankfully they were not devoid of clothes. While picking up the last of the guests we got sight of about 40 Crossbills flying over before we headed off to view the WT Eagles. Heading on from there we located an Otter mum with 2 cubs that were crawling through the shallows and seaweed. They took very little notice of us as we watched quietly from the shore.

Cracking views of a Common Whitethroat were had at the same time but a singing Blackcap proved to be too elusive for us. With GN Diver, Eider, Common Sandpiper and an oiled Common Guillemot adding to the list we stopped to look at a Hooded Crow nest with at least two youngsters. 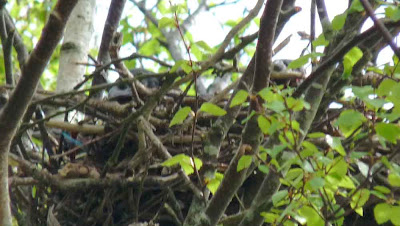 At our next stop the Golden Eagles put on an impressive display as they both flew in and one of the birds stooped out of the sky with legs dangling - fantastic stuff. 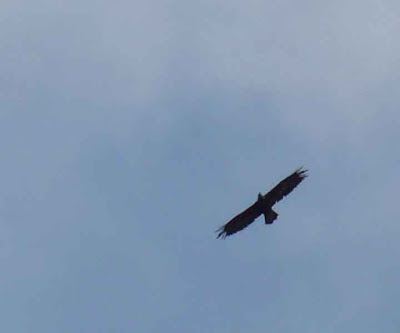 A Common Snipe was on sentry duty standing on a post at the road side which provided some of the best views that you can get of this species. We finally caught with a Blackcap as it flicked about in some Birch trees and we had a fine welcome from the Highland Cattle at our lunch spot.

Two Ravens put on a good display and the Dipper was seen in flight before we picked up a couple of Whinchat. A Lesser Redpoll perched in a tree was a good sighting for the day along with views of a female Hen Harrier in hunting mode. The five Dunlin I'd seen the previous day had been joined by a single Ringed Plover. One of the guests had an interest in Brown Hares while at home and was particularly keen to see a Mountain Hare. She was delighted to get the close views that we had. 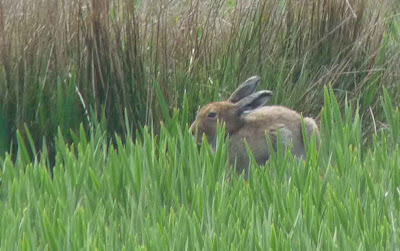 Both Twite and Whimbrel had been requested for the day and we got them both within minutes of each other. The Twite performed well on the track in front of us and 2 Whimbrel flew past calling away.
Monday started off really nice at about 5am but by 7am it was raining and by 9am it was back to fine weather but a lot cooler. It was the usual fare in the morning with good views of Golden Eagle perched up and flying, Golden Plover were close to the road for a change, nice views of the Eider and the GN Divers wouldn't stay up long enough for a good view through the scope! The WT Eagle nest had the chicks showing but no adults in sight and when a large bird appeared we thought our luck was in. It turned out to be a young Golden Eagle being mobbed by a Hooded Crow and a Buzzard. How long do you wait for a bird to fly back in? We gave it a bit of time but with nothing happening we moved on. Two More Golden Eagle were seen along the way along with two Raven. Naturally when we returned to the WT Eagle nest one of the adults was back feeding the youngsters. A very nice Otter was seen eating it's breakfast unperturbed by our presence. It just happened to be in the same place I'd seen the three Otters yesterday so the Whitethroat was still in full song at the top of an Oak tree. 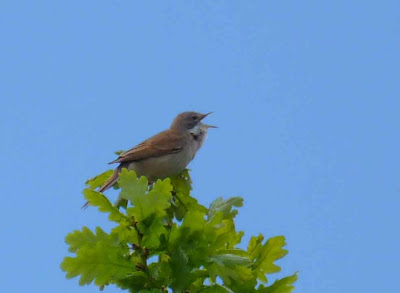 The Otter was, by this point, settling down for a kip with tide rising rapidly. It won't be sleeping there for long. 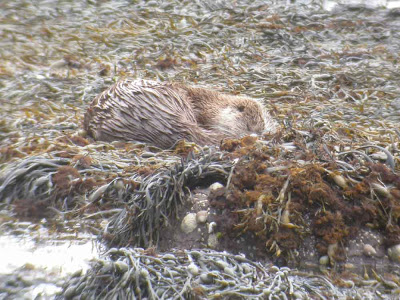 The wind really picked up in the afternoon so we were happy to get flight views of Lesser Redpoll, Linnet perched on a fence and cracking views of a Cuckoo. 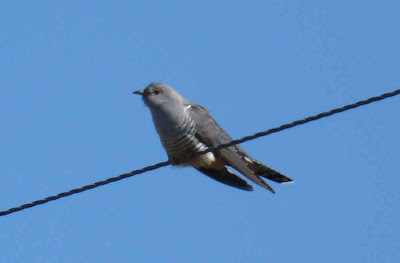 Our last stop of the day turned up a couple of Turnstone with the Dunlin and Ringed Plover along with 3 Mountain Hare.
Posted by Bryan Rains at 09:23

Looks like your having some great weather. Will the Goldies fly in any weather or do they perch up in rain. Back in scotland after a long abscence, taking in the joys of Speyside.

Awesome, awesome, awesome day!! WOW! Thank you so much Bryan! (Also for giving the list to Jo for me which I forgot in the van...)! A really memorable day! Saw mountain hare again in same place on way back from Iona and also at Duart Castle as you said there would be! See you next time!
Maria