Saturday was a fine day with good visibility. With the guests on board and requests for Golden Eagle, Otters and male Hen Harrier we headed off to see what wanted to be looked at. Two Golden Eagle were quickly on the list with the birds perched on a cliff and then flying around. We could hear Cuckoo calling but couldn't locate it and a Red Deer or two were seen while we scanned around. The old sixth sense kicked in at the next stop as I drove past a passing place something made me stop and go back to it. I hadn't seen anything but it was just a feeling that I should be looking from here - we found this. 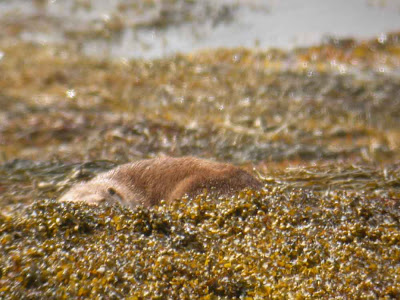 We stood and watched as he woke up, preened himself and headed off - quality! After a quick look at the WT Eagle at the nest we headed back down the loch getting good views of GN Diver and another 4 Otters (two pictured below). 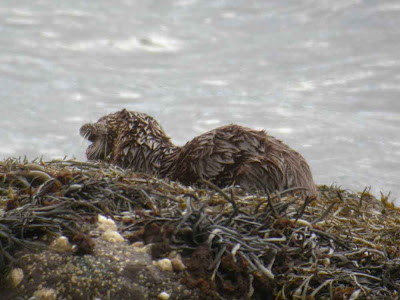 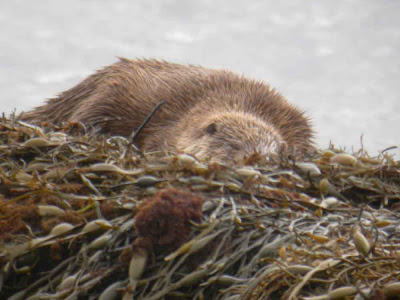 At lunch we had two Golden Eagle in the distance and Tree Pipit before we picked up another Golden Eagle closer in. While we were watching this bird flying in front of the forestry the view through the binoculars was blacked out for a second as another Golden Eagle came straight over the top of us!!! A couple of Whinchat were seen just after that and then we headed off on our travels. We managed to catch up with a male Hen Harrier breaking the ridge and then hunting the moorland - all requests fulfilled, there were smiles all round. Nice views of the Mountain Hares... 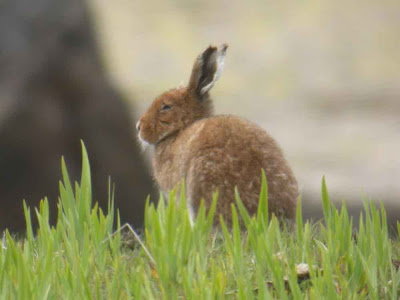 ...were had while we searched through the various waders at the end of the day.
Sunday started off as a cracking day but by the time I headed off on tour the weather had changed with showers pushing through. I'd already seen a couple of Otters early in the morning so I was hopeful of relocating one of them as we headed round the loch. Golden Plover, Dunlin, Ringed Plover, GN Diver and Whimbrel were all seen before we got sight of an Otter hauled out on a spit of land. A prolonged shower dampened things down a bit before we located another Otter bringing a Dogfish ashore.

At least 3 Lesser Redpoll were seen with a few Siskin while our third Otter of the day was sleeping on the far shore. Two Golden Eagle were picked up just after the shower passed but they were reluctant to fly. A fledgling Stonechat 'chacked' demanding food from a parent bird. Another look through the waders added Greenshank to the tally for the day. Lunchtime was enhanced with the sighting of the Dipper in flight and feeding in the river before I finally got a shot of the Tree Pipit. 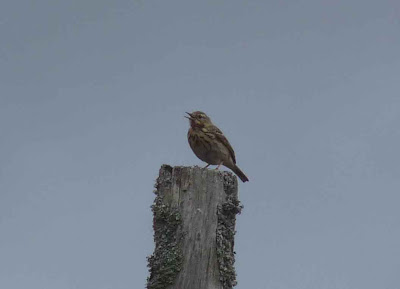 The weather was starting to close in and it wasn't too long before it was raining again. There was still a slim chance of Golden Eagle in flight but it wasn't looking good. We waited as the rain got heavier and then a big bird appeared, low against the forestry, being harassed by a corvid - it was the Golden Eagle. Impressive stuff! A fair bit of searching around produced a few more Whinchat along the way before we caught up with 6 Black-tailed Godwit, at least 10 Twite, cracking views of Oystercatcher, Ringed Plover and Lapwing along with a couple of Mountain Hare. The weather had been well and truly beaten!
Posted by Bryan Rains at 08:53