Wednesday was a bit of a strange one with the weather - I started off in sunshine and drove into thick mist. There was no sign of Iona when we arrived at our starting point but the weather was due to improve. A flock of 30 Whimbrel were good to see and good sightings of the Dunlin, Golden Plover and the Mountain Hares. A couple of WT Eagle sitting together on an outcrop of rock gave us a good start with the big stuff and I managed to get a sighting of my first Tree Pipit not too long afterwards. A Golden Eagle performed well before we headed off for Otters. It didn't take too long to catch up with one of the furry beasts and 3 Lesser Redpoll landed in a tree next to us while we were viewing it (I only got two in the photo). 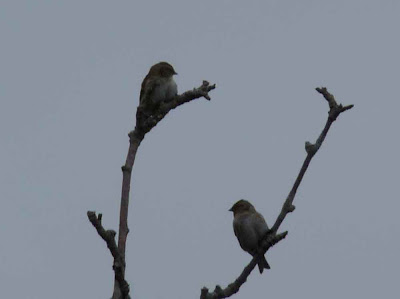 A cracking juv WT Eagle sailed over our heads while we were having an afternoon cuppa - a cracking way to finish.
Thursday was a nice clear day and a bus full of folk. I had most of the guests on board when we located 2 WT Eagle flying over the road. I was hoping the guests I had to pick up were looking in the right direction as they were just over the hill from where we stopped. We picked them up and  I was relieved to find out they had caught a glimpse of the birds as they dropped on to our side of the hill. 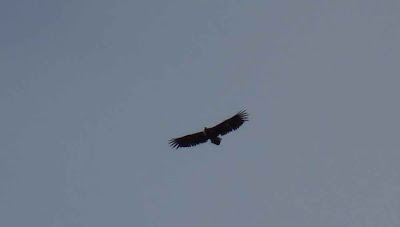 We bagged the usual array of waders and Mountain Hare before we got decent views of a Whinchat. That view was surpassed by another sighting of the same species right beside the motor at lunchtime. The Golden Eagle did it's stuff and another photo was taken. 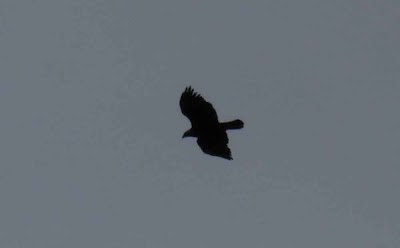 We managed to pick up two Otters and another WT Eagle flying over the loch before we bagged two Golden Eagle flying over the ridge. There were some life time achievements had by the guests and there were grinning faces all round!
Today was a cracking day for Diamond Geezers (you know who you are). A particular request for Otters as they had failed to see them on their last visit. We headed off to pick up the other guests and within 5 minutes we were looking at 5 Otters just off shore!! I left the Diamond Geezers at the loch side and went to pick up the other guests. Straight back to the Otters and bingo.... 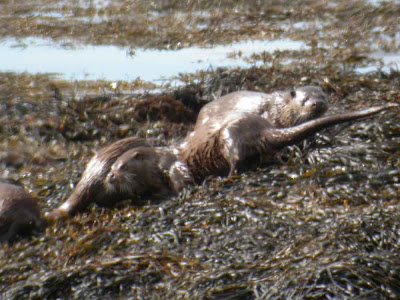 They had hauled out a Dogfish and everyone was having a go at it. Usually they just eat the liver and leave the rest but the youngsters seemed intent on finishing the bony remains! We watched the WT Eagle feeding the youngster before we moved on to locate a Golden Eagle. Along the way we picked up a few Whimbrel... 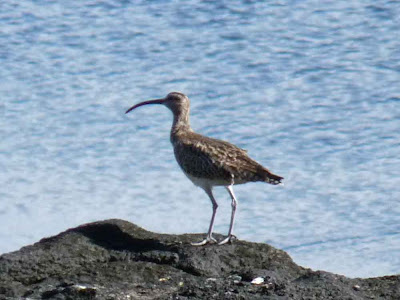 ...and a male Hen Harrier hunting along the hillside before spiralling up and out of sight. A brief glimpse of a Golden Eagle was had and we tried following it up but to no avail. Three WT Eagles soaring over Ben More were pronounced to be 'Diamond, mate'. An adult WT Eagle was spotted sitting on a rocky outcrop being harassed by a Hooded Crow. 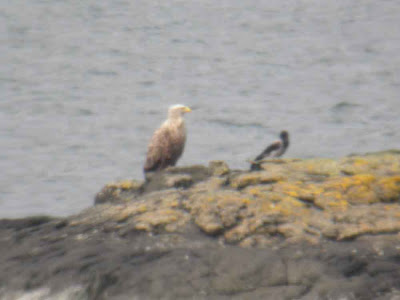 The bird left soon after and headed towards the nest. We could see there was another WT Eagle flying in that area and there was a bit of a scuffle between the adult male bird and what was easily seen as a juv female bird. They finished off the tussle by locking talons and spiralling out of the sky!! Cracking views of Golden Eagle and Cuckoo were had before we bagged another two WT Eagle and two more Cuckoos with a fly over Peregrine to add a bit more icing to the ever tastier cake - Diamond, I tell ya! A Northern Wheatear posed perfectly on a wall next to the road to give me this opportunity. 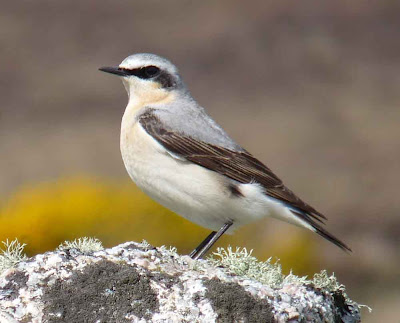 Twite were located after listening to the birds calling and not being able to find them, they flew flew straight in front of us. The Hares were a treat too... 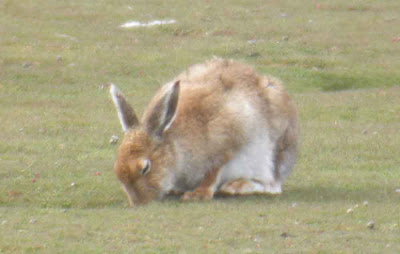 Our last stop of the day was a 'where do you look first' moment. Two Red-throated Divers, three Puffins and a Golden Eagle!
Posted by Bryan Rains at 20:33

Sounds like you had a really good day, wish we were there, August can't come quick enough!

Next Saturday can't come quick enough. Just make sure that you keep the red throated divers and the male harriers there for us please!
Thanks for taking the time to keep on posting these interesting blogs Brian, it is appreciated by many.
Regards
Rick

Thanks, guys.
Rick - The real hard part is trying to keep them short and getting the photos. I'll keep plugging away:-)

For me it's a week on Sunday that can't come quick enough! :-)
Superb photos and sightings!
MJ