Saturday was a fine day with a brisk NE wind. With the guests on board we headed off to see what could be found. A group of Whimbrel were first to be added to the list along with 2 Curlew for comparison. A Sedge Warbler was on a singing perch allowing nice views through the scope as a couple of Skylark were dust bathing on the side of the road next to us. 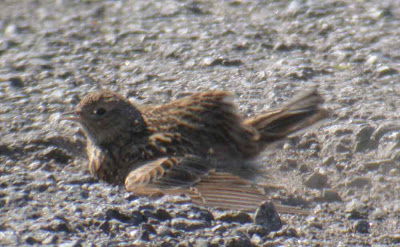 I picked up a flock of 10 Whimbrel in flight that had 2 Black-tailed Godwit with them but we couldn't relocate the birds as they had landed in an area we couldn't get a view of. Dunlin, Golden Plover, Wheatear and Mountain Hare added to the interest. A cracking Cuckoo perched up on the wires was a first sighting for some of the guests. It dropped down in the grass to pick up caterpillars and then back onto the wires where it called and wagged its tail - tremendous stuff. The guests today were all ladies and when one asked a question about Beavers another piped up, in a Scottish accent, 'Have you seen any fine Scottish Beaverrrrrrrs aboot?' the whole bus was creased up with laughter. This was brought up a number of times through the day with the same result - not the best when your looking for Otters (is that one of them Beaverrrrrrrrrs? Hoots of laughter). We, surprisingly, never disturbed anything but I'm sure everyones sides were aching as much as mine at the end of the day! Back to the sightings - good views of Tree Pipit, Common Whitethroat and Golden Eagle at lunchtime along with a first for me, a Green Hairstreak  - excellent. The next stop we made was one of those where you don't know here to look. I'd spotted a couple of Golden Eagle in the distance so we headed up the road to get better views. We couldn't find the birds when we arrived but picked up 4 WT Eagles and a male Hen Harrier. The Goldies came back into view as the WT Eagles gained height and two female Hen Harriers broke the skyline briefly. We picked up an Otter not long after this but we were soon distracted by two juv WT Eagle flying over. A quality day all round but we didn't see any beavers!
Sunday and Monday were similar days being a bit cloudier and a lot colder at times as the cold Northerly was still blowing. I managed to get a snap of the Common Gull that has been sitting at the roadside for a few days now and what a stunning bird it is. 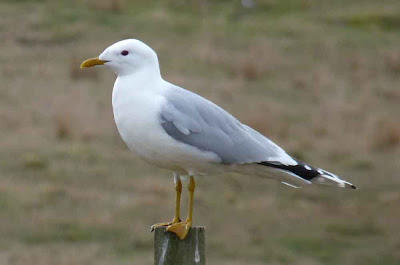 Good views of GN Diver were had before we caught up with an Otter on both days.

The WT Eagle is certainly feeding one chick - nice to see these big birds being so gentle with the youngsters. The afternoons have been a bit quiet but some cracking sightings of various different things like the Dipper, a young Red Deer posing... 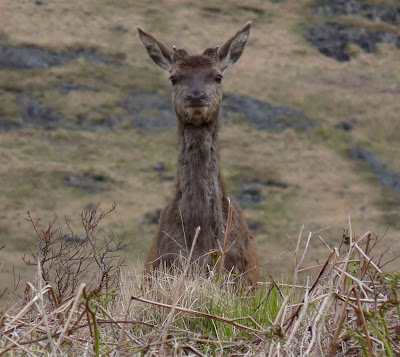 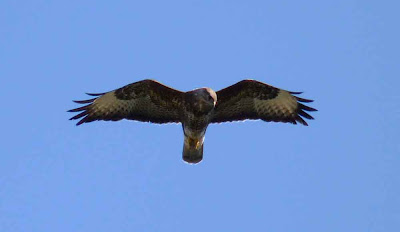 ...and of course the Mountain Hares along with all the wading birds. A popular sight along the way have been a group of rare breed pigs! 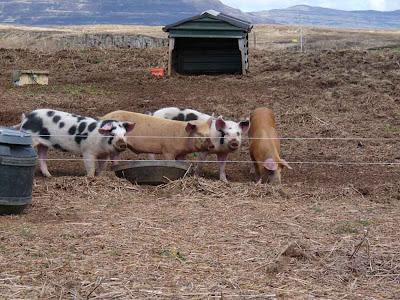 It all makes for an interesting day out and that includes the Purple flowers we saw on Monday;-)
Posted by Bryan Rains at 08:47

Hen harriers-that's the way Bryan, just keep them there for another few days & I'll be well pleased (if not wet judging by the weather forecast)
cya Saturday
regards
Rick

Scotish Beaverrrrrrr! Still talking about the tour and on the way back to Oban to get the ferry we were on the look out for every different bird, naming them expertly thanks to you.
Thanks for a quality tour from Sarah, Helen, Liz and Allison

What a fun couple of days you had. I love the hovering buzzard shot.

Gloucester old spot pigs! I used to keep those!! - and are the other ones Tamworths??
Fantastic.... (and of course the birds are wonderful too)

Cheers for the comments.

Rick - Harriers are thin on the ground. It'll be a good one to get.

Wilma - good to see you've got back to the blogging. I was starting to think you'd melted away with the snow!

Kate - Spot on wiht the pig ID. Friendly little beasties they are.