Monday was a cracking day as you can see below. 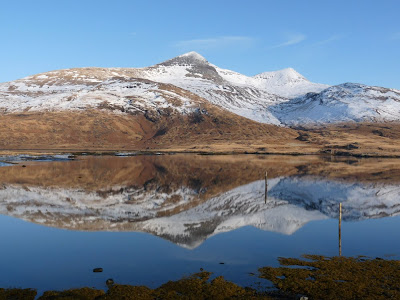 I'd been putting off a tour due to the poor weather but today was the day to hit the road. With the guests on board we headed off in search of Otters to give us a good start. Along the way we picked up a couple of Goldeneye, 3 GN Diver, 2 RT Diver, Shag, RB Merg and Common Seals before we caught sight of some likely looking splashes further up the shoreline. First one Otter appeared in the water and then two more just behind. They crawled out where we could hardly see them before heading back into the water and then back onto the rocks in full view. We drew a blank with WT Eagle before picking up a nice stag in the snow. 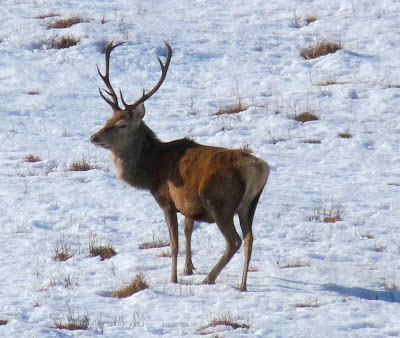 A couple of male Crossbill flew up from the side of the road so we hauled in and managed to get views of the birds in the trees. We struck lucky with two WT Eagle close together and got good views before I attempted a photograph. As soon as the camera came out the bird got shy so you'll have to make do with this blurry effort! 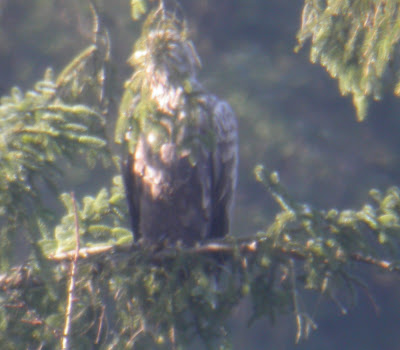 We pressed on to the lunch stop where it was looking like drawing a blank before the cry went up for a bird breaking the skyline. It was being a bit elusive before finally giving itself up and revealing it's identity - a cracking male Hen Harrier! It paraded around in front of us before heading off in the distance. It was nearly time to move on so while I was tidying up the lunch another cry went up for an even bigger bird - Golden Eagle this time. Two birds circled around showing well and then we got some display too before they drifted away. We kept an eye on them and eventually one bird landed and it wasn't too long before the second bird came swooping in and landed on the back of the first bird - it's not that often that you see Golden Eagle mating - result! This blurry mess is one of the Goldies sitting on the ridge about a mile away. 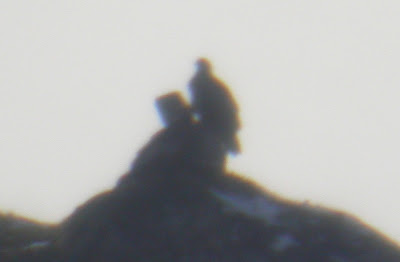 We headed off satisfied with our lot. The afternoon was quiet in places but a Mistle Thrush and a couple of Reed Bunting were good finds and 6 Rock Dove were in the throes of courting before we checked out the WF Geese. A flock of Golden Plover flew over us and the Lapwings were in full display and a Mountain Hare was munching on the grass - you don't know where to look. A small flock of Skylark were blending into the scenery very well and we eventually decided there were 8 birds. This Song Thrush was quite bold but it wouldn't pose nicely for the camera - worth a go though. 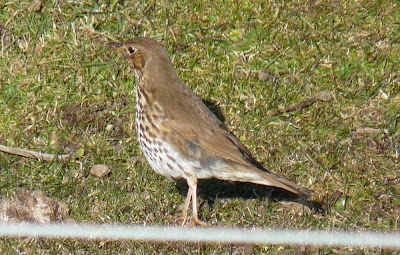 A Kestrel was putting the frighteners on a flock of Fieldfare every time it left the telegraph pole it was sitting on. 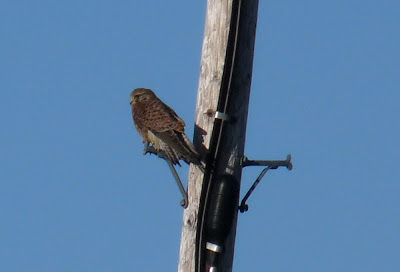 It was time to head back and try to pick up a few species we'd missed out on. I managed to pick out my first Razorbills of the year in company with a single Guillemot. There were plenty of Buzzards sitting on posts before the traffic was stopped for a few Red Deer crossing in front of us. First one... 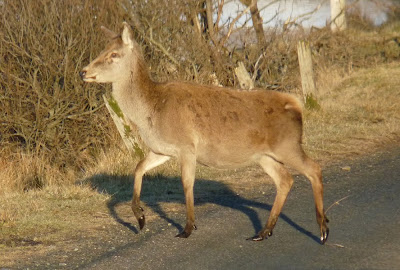 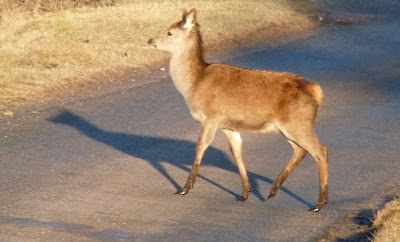 ...crossed to join the ones we'd missed. Surprisingly, we'd managed to get through the day without seeing Common Gull and BH Gull so they were tidied up along with another flock of 12 Golden Plover. It had been a good day out but with the calm condition I thought I'd better count the GN Divers - 33 in total.
Tuesday I had to travel to Oban - it was another cracking day so I tried to make the best of it. Another search for the Ring-billed Gull was fruitless but the usual suspect held a few birds that could fool the unwary. I did find some nice Black Guillemots close to shore so they got the camera treatment...

...but they did look a bit bored - I'm sure that bird is yawning.

The Herring Gulls are always good to watch as they menace people who turn up at lunchtime. 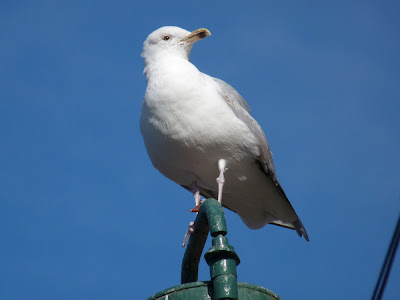 Try and stare this fella out - it's a real menacing look and just a sideways glance!! 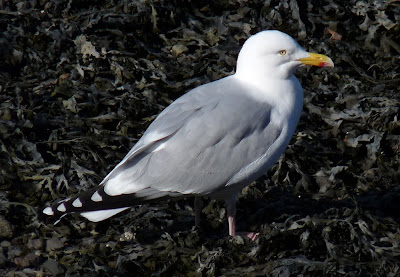 I was back on Mull mid afternoon and keen to get home but I had to stop to get a few snaps of this chap. 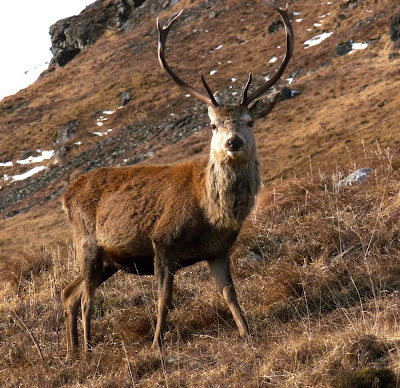 A handsome beast but looking a bit lean. I might have to try photographing something different to deer for the next gripping installment!
Posted by Bryan Rains at 20:21

What a gorgeous day; your first shot is stunning. And you had a good day for spotting the wildlife. Great post!

Hi Bryan
Some lovely shots, makes me want to come back. You took me round Mull in November 07 and we had a great day with something like 70+ species including 100% of my targets! Just discovered your blog, will keep reading it!
Best wishes
Jonathan