Tuesday was a fine day so I headed round to the WT Eagle nest to see if they were sitting yet. I got a nice shot of a Hooded Crow on the way there. 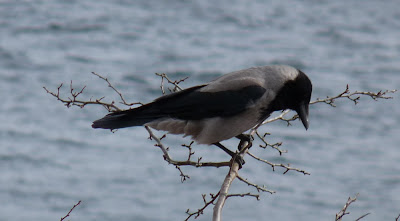 The male bird was sitting tight on the nest when I arrived. Not a great sign as the female does most of the sitting with the male taking over for short spells while she has a fly around. All of a sudden his head went up and he started calling and as I looked up there was a young WT Eagle flying over, which landed out of sight for me, and the male settled down again. A Golden Eagle put in a brief appearance in the distance and when I looked back the female WT Eagle had appeared from nowhere! She walked around the nest rearranging the edges and the cup of the nest. The male flew down into the trees and reappeared carrying another stick for the nest which he then tried to find a good place for it. She got hold of the stick too and there was a fair bit of pulling and pushing going on before they finally agreed on the placement! Two more Golden Eagles provided a bit of a distraction for 10 minutes as they swooped low over the trees and then gained height before moving out of sight. Two Buzzards were sitting minding their own business in the field below and were mobbed by the Hoodies. 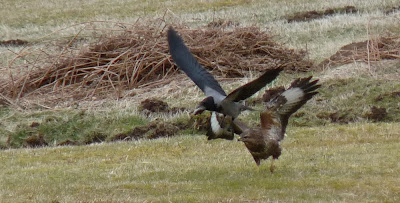 With no sign of anything else happening I headed back home.
Wednesday was a day of rain but it was due to clear sometime in the afternoon. I was busy with other things in the morning so I headed back round to the WT Eagle nest in the afternoon to see if there was any change. Both of the birds were standing on the nest in the rain so there was no point in hanging around.
Thursday we had a few showers pushing through on an otherwise nice day. I had to go to Oban so I headed off for the first ferry. As I was driving along I disturbed a Wheatear from the side of the road. It's the first I've seen this year and I couldn't stop to get a better look! On the return journey I had a look for the bird but there was no sign. A couple of miles up the road two large birds appeared heading towards me. I stopped the car and tried to get my hands on the camera as an adult and juv WT Eagle flew over the top of me! With the camera in my hands I watched as the adult bird turned and headed back towards me. I tried for a couple of shots but they aren't the best. 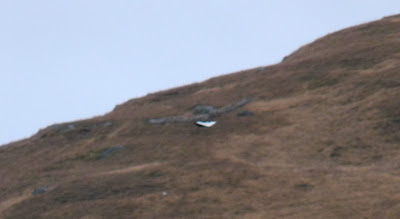 That was the best I could get! Once again I headed round to the WT Eagle nest and this time a result - the female sitting tight and she did get up and appeared to move something in the nest then carefully snuggled back down. Once again I was distracted by a Golden Eagle in the distance and I attempted a digiscoped shot despite the dull conditions. 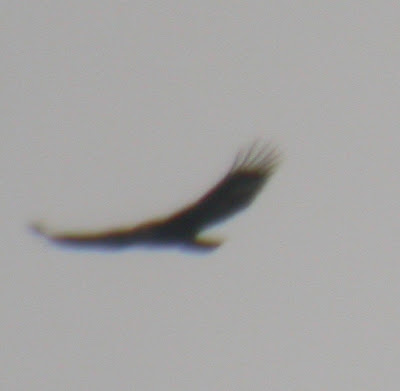 It's a horrible picture but it's better than nowt!
Posted by Bryan Rains at 18:34