Monday I wasn't out birding but it was a pleasant day with a light Northerly blowing. I heard some trumpeting in the distance and waited patiently for the birds to come into view - 22 Whooper Swan in formation. I hope they made it somewhere safe before the weather caught up with them as the forecast was for strong winds and snow.
Tuesday the predicted weather hit and kept me inside. I had a go at photographing a few birds in the garden but the branches were swaying that much in dull conditions it wasn't going to work! It hadn't really snowed that much but Ben More had a fair covering. With more snow forecast it wasn't looking good.
The snow started late on Tuesday night and by Wednesday morning there was a decent covering. 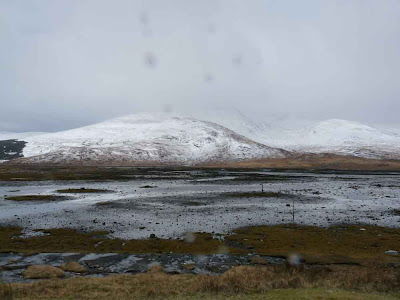 I had to take the cat to see the Borg to be assimilated vet to have his nuts chopped and the roads were, let's say, exciting on the higher ground! As usual the snow was localised around us and once through the glen it was reasonably clear. My first good sighting of the day were 2 Snow Bunting flying off the side of the road and a cracking Golden Eagle being mobbed by a Raven. While waiting at the vet's I had a few Crossbill in the trees but no camera or binoculars to get a better view. On the trip home I bagged a female Hen Harrier. Not bad for a run out with no equipment. I thought I had better go out and get a few snaps to brighten up this posting so here goes... first off were a mother and cub Otter.

There was no chance of getting in front of them as they were heading into the wind so I just had to follow until they clambered out. Crab hunting... 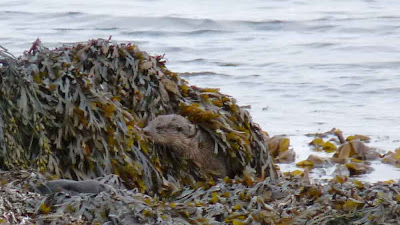 While I was waiting for my opportunity to get those snaps I noticed that the Larch trees were starting to sprout - colour at last! 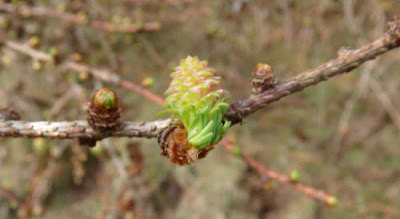 One of the reasons for heading out was to check on the local WT Eagles. It would have been nice to get round early to see how much snow they'd had to cope with but you can't have everything. Anyway, the female bird was sitting tight on the nest with no sign of the male bird. I headed back round the loch and I was surprised to bump into another four Otters. Mum and two cubs with the resident male checking things out. No shots of the male but I did get the family trio on the rocks...

A nice female Stonechat kept me company for a wee while too. 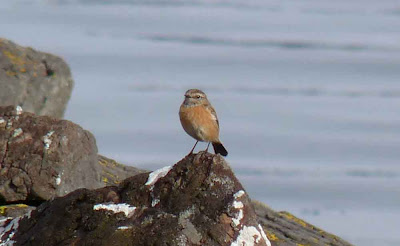 You don't want to use all your luck up in one go so I headed for home. It pays to keep your eyes open though...as I rounded one of the corners a large bird was circling. It was fairly high but I pointed the camera at it anyway... 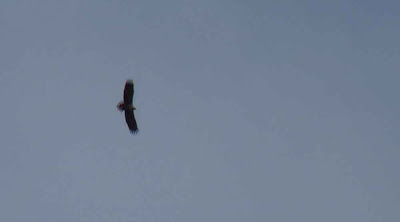