Monday was pleasant day with no rain and very little wind. We started off with the hunt for Mountain Hares but there wasn't a sniff of them. The first thing of interest that we saw was this calf that had just been born - still in the bag and struggling to get up. The first of the young ones.

Ten minutes later it was on it's feet and suckling from mum - aaaahhhhhh! We picked up a female Hen Harrier while watching the bovine antics and we left soon after with no Hare. The day took a bit of a nose dive after that with very little on show except the common stuff. A brief glimpse of a WT Eagle perched on a distant ridge was all we had until late in the afternoon when a breeze started to pick up. An Otter asleep on the seaweed was a relief to see but the next Otter we found showed extremely well - a just reward for the quiet spell. 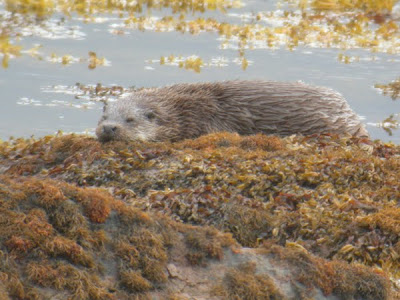 A search for a closer view of WT Eagle was looking like a waste of time until this young one flew right past us.... 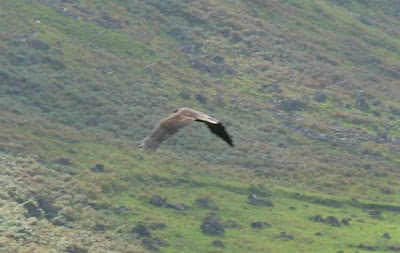 ....then landed briefly on the hillside!

As the bird gained height, after taking off, a Golden Eagle joined it and they both disappeared into the cloud that was hanging on the ridge. On our return journey we picked up the dog Otter again who was out on the shore again.

We finished the day of with views of a Goldie perched on a ridge and 2 WT Eagle, one juv in flight and another perched on a ridge.
Tuesday was a different day altogether. It was drizzling when we set off but looking like it would break up. The guests on board we headed off in search of WT Eagle and it took a bit of time. We located 2 young ones in a field and no sooner had we found them and one was in flight - we headed to a closer view point. The local Hoodies and Herons were going ballistic with the giant in the air. 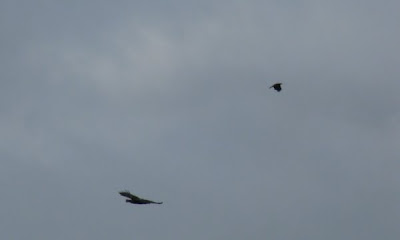 This bird crossed the loch and made a half hearted attempt on a few Eider before landing in a tree next to another WT! Three in one go wasn't bad but that was just the start of it! We'd had a tip off for an Otter so we headed in search of that. We had a patient wait before finally picking it up but with the wind blowing from our backs it wasn't long before he clocked us and moved off. 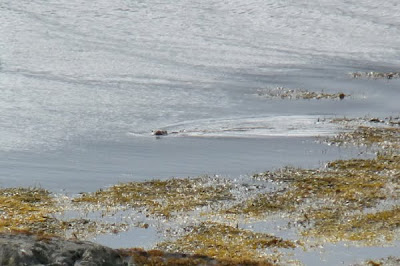 Next on the hit list was Golden Eagle - no problem with that as we picked up a bird on the ridge. A bit of a drive to get a closer look paid off as the bird took flight and was immediately joined by a second bird. They soared around for a while before seeming to take interest in something....another juv WT Eagle was just underneath them. The male Goldie dropped out of the sky with talons outstretched and the young WT flipped over to present his talons! Strangely they soared around together after that but seeing all three bird together it was apparent that the young WT was a female bird - huge compared to the Goldies! We bagged all the waders around Loch Beg including the Common Sandpiper. Driving on a shout went up for a large bird in flight - juv WT Eagle again! It eventually came right overhead..... 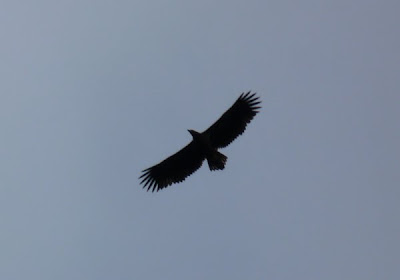 After this bird disappeared we went in search of the seals only to have them overshadowed by an adult WT Eagle with a young one not too far away. 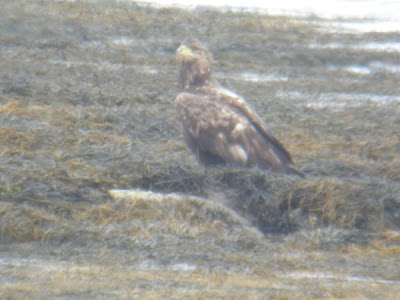 Lunch proved to be a bit quiet but we did eventually pick up another distant Goldie and a different adult WT just before we moved on. Another stop to look for Otters didn't give what we wanted but yet again an eagle stole the show - Golden Eagle at close range! We headed off for the Hares and some small stuff. Five Mountain Hare all tucked in to various sheltered spots and good views of Linnet, Goldfinch, Skylark and a couple of Common Snipe. We'd had a cracking day so we headed off in search of another Otter but we were foiled again at the first stop we made. We scanned the area thoroughly and nothing was showing at all so I had a quick glance in the opposite direction to find 2 Golden Eagles circling in the mid distance - no sooner had I got everyone onto the birds and another one flew right overhead......followed by another.....then another!!!! They were all adult birds too. We'd obviously hit rush hour on the Goldies M25! Half a mile down the road another Golden Eagle appeared at close quarters but this time it was a young one with the brilliant white patches on the wing and tail - absolutely stunning. I told everyone to close their eyes and stop looking after that - what a day!!
Wednesday was a cracking day weatherwise with clear blue skies and a decent breeze too. A no show for the Mountain Hares but the female Hen Harrier was about again so that got us a good start. Next on the list was a Golden Eagle perched up on a ridge with a fair number of Rock Doves on the moor in front of us. Strangely nobody saw the Rock Doves fly away! A trip to the beach next was looking a bit blank until we got Gannet, Northern Wheatear and a cracking male Grey Wagtail. Stonechats and Meadow Pipits on the return trip was brightened up immensely by the appearance of a male Merlin flying up the road in front of us. As the Merlin disappeared into the scrub it disturbed a Sparrowhawk that smashed it's way through a hedge before flying off. Seeing both these birds so close gave a good impression of the different flight patterns, wing shapes and most of all the size difference of these two birds. We bagged an Otter not long after that performed well in the shallows before climbing out on to a rock briefly. Then it all went flat - conditions looked good but nothing was showing. The usual array of waders, seals and stunning views but no sign of any birds in the air - even Buzzards seemed to be in short supply! We got brief views of 2 adult WT Eagle over a ridge, no sign of any more Otters and eventually we picked up 2 Golden Eagle sitting on a ridge and another in flight. It was a bit of a let down after the previous day but that's wildlife for you!
Posted by Bryan Rains at 08:07

Happy Birthday for sunday. Good blog for a new mamber of Saga.