Shooting for the moon

Wednesday was the pleasant clear day that we have waited for. It certainly looked like it could be a day to capture a few classic moments with a back up plan of snapping things that don't move much! With a friendly spotter on board we went in search of wonderment and it went a bit like this....a search for Golden Eagle that produced a photo of the Moon in a clear blue sky - no eagle. 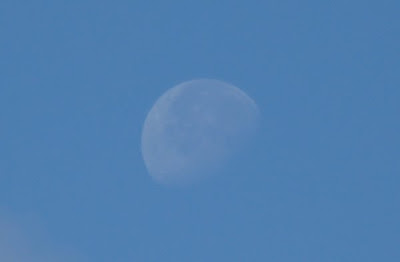 We moved to another location and caught a shower of rain and as soon as it passed we found a WT Eagle in the distance and the Goldie we had been waiting for did a distant fly by heading in the direction we had just come from! We set off in pursuit only to find nothing at all - how lucky can you get?! Stumbling across a small flock of Goldfinch provided one of the highlights of the day as there was a Whinchat, a Common Whitethroat and three Stonechat in the same area. We tried our luck on the things that are nailed to the ground, so to speak. Grass of Parnassus was still in flower next to a small waterfall that gave a nice background... 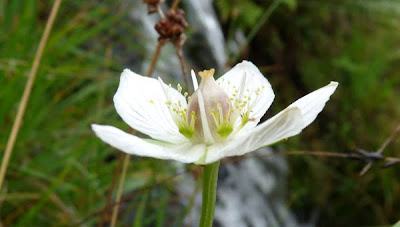 ...the Hazel nuts are just starting to turn so I gave them a shot too. 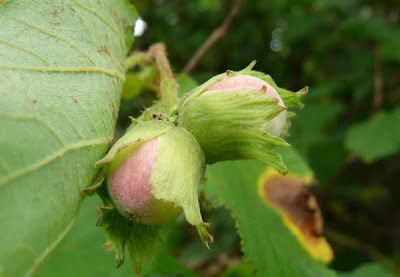 We stopped at the shop for lunch and had a rethink while checking out the waders - naturally nothing close enough to photograph. We headed off in search of nothing in particular and that's pretty much what we found - nothing. The riot of colour provided by the Rowan trees at the moment is pretty spectacular. The photo doesn't do the justice the Rowan deserves but there certainly is a good crop this year. 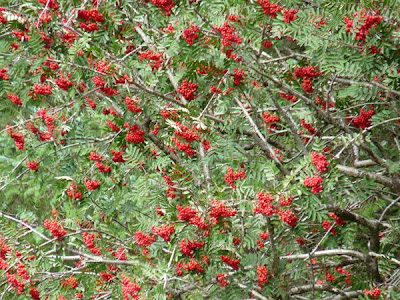 We went in search of Gannets for a change of scenery but they weren't playing fair either. A reasonable number of birds about but all too distant - 'bother', or words to that effect, were heard to be mentioned by the friendly spotter on board. The best we could manage was a Shag sitting on a rock that looked like it was ready to go so we sat and waited for it to fly....it went eventually and it probably wasn't worth it either...

Heading back we had a Peregrine come shooting in front of us and then gaining height. We hauled over and watched the bird till it landed at the top of the cliff and tried it's best to not be photographed by preening and turning it's back - I was persistent and got a poor digiscoped image for my trouble. 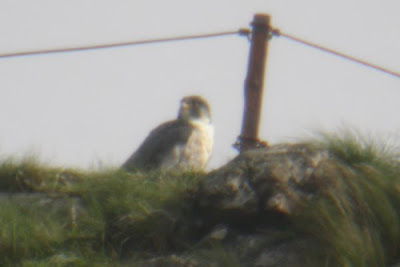 Back at the shop and packing the gear away I found this bizarre insect, with his house on his back, loitering on the motor. 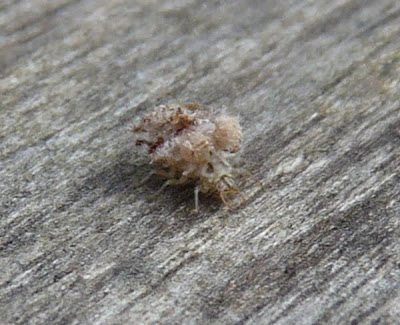 I hasten to add the motor is not made of wood - I put the bug on the table so we could take some snaps. No idea what it is either.
Thursday was another cracking day - blue skies and pleasantly warm to start with and a bit of cloud cover building up through the day. I was hoping for better luck today and it didn't take too long to improve on the previous day. Three WT Eagles were located while looking at a herd of deer. An explosion of corvids in the distance had me reaching for the scope to discover the huge lump of an eagle sitting out the attack of the corvids. It didn't take long for the WT to take to the wing and it dropped out of sight. No sooner had it disappeared than another two bird were heading in the same direction. It was a shame that they flew away from us though. We set off in search of other things and got a nice surprise in the shape of 6 Common Crossbills flying around. They wouldn't settle for too long but they were nice to see. As they headed off into the distance I'd noticed a pale patch in the trees so I refocused on this to find a spanking adult WT Eagle sunbathing - stunner! Moving on to the water birds we picked up a couple of Little Grebe and a lone Wigeon that were fresh in. Lunchtime provided an eagle spectacular with a juv bird showing very well in the sunlight and three adults in the distance. One of the adult birds was being seen off by the other two - a spectacular dive down on to the intruder had the victorious male displaying with great vigour - cracking stuff. Two Hen Harrier sightings in the same area spiced things up a bit too. We headed off in good spirits not too worried about what else we would come across. Another Common Whitethroat sighting was a surprise and again the bird was in company of Stonechats but a few miles away from yesterdays encounter! We got the 'V' sign at the next stop as we located a pair of ears sticking up from behind a rock - a Mountain Hare was the culprit and he did show eventually. A flock of Linnet showed well along with a few Skylark and Rock Pipit. We still hadn't seen an Otter so with time running out we headed off in search of one. We checked a few likely spots without any success but we needn't have worried as the trusty mother and cub were showing well in Loch Beg.
Today has been another pleasant day with the lochs flat calm this morning. I'd promised to go on a shopping trip for some uisge beatha but a bit of wildlife watching along the way wouldn't go amiss. A flat calm sea soon produced a number of Common Seals, 1 Otter and 2 Porpoise - that'll do for a start! Shopping next and then back along the way to find a couple of spanking RT Diver with one of the birds calling to the other. Along to the mussel farm to count the Eiders next - 200 of them and a single Black Guillemot. This Hoodie was checking to see if a manicure was required! 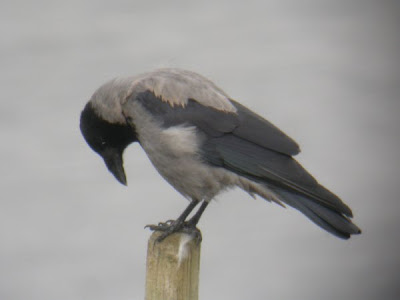 Ever closer to home and GN Diver was next on the list and a Common Guillemot. A scan of the ridges produced one WT Eagle sitting and another in flight - sometimes it's worth shooting for the Moon!
Posted by Bryan Rains at 16:57