Sunday - washout!
Monday was a fine day with a decent breeze blowing and the odd shower here and there. This was certainly a day of two halves with the morning starting off on a bit of a blank that changed rapidly. No sign of any birds of note as we set off so we looked for Red Deer instead - there was heaps of them! At the next stop there were more Red Deer and not much else until I was thinking of moving on.....a raptor appeared....we watched it.....it got closer....then went overhead....adult WT Eagle!

While watching this bird cruising overhead someone picked up another bird that turned out to be Golden Eagle - we didn't know where to look. Both the eagles moved off and then another WT Eagle appeared following the trail of the first bird - another adult. It was a good start if a little slow to get there so we set off for Otters fully alert and full of anticipation. The tide was still quite high so there was a chance of a close encounter. We stopped, scanned, waited, moved on and eventually picked up a lone dog Otter but only briefly. We moved to a better position and scanned around where we thought he should be....nothing. We were getting restless and it was looking like we would move on empty handed and then there he was again and close too! He put on a fine performance after that to everyones relief. We checked out the waders on display and picked up the usual crew with the biggest difference being 5 Knot instead of 4. Then the day went flat as the weather started to change. Despite the wind still blowing there were no Buzzards up, the small birds were taking shelter and it was all a bit of a struggle. We'd certainly had what we wanted in the morning but saw very little until we picked up 3 Mountain Hares. We retraced our steps to see if anything else could be gleaned from the day. The wind dropped dramatically and the lochs were flat on the way back.....it all changed again. A Merlin flashed by us, we bagged a cracking GN Diver that was calling all the time we watched, a Goosander was a good find too. While having another look for Otters we could hear a bit of a commotion as the local Greylags got up....... 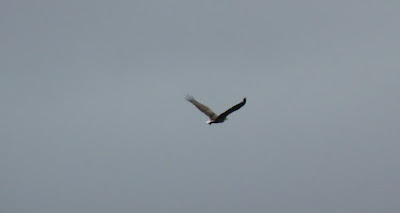 ...but two came flying across in front of us! A fitting end to the day.
Tuesday was forecast for heavy rain and gales. Not a great prospect but it has to be endured - metcheck said it might clear so I was going with that! I set off in rain to pick up the guests and by the time I had everyone on board the rain had stopped but it was blowing a hoolie. We picked up one of the adult WT Eagles perched up in the trees and while we marvelled at the regal sight the youngster tried to sneak past us - the gulls gave him away! 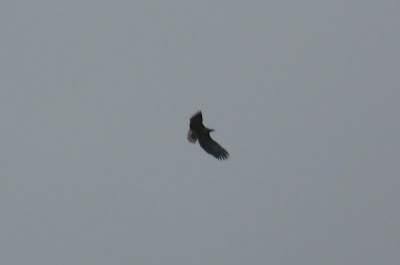 On the trail of the Otters after bagging some Red Deer and the conditions were not the best. Dodging potholes and a procession of Minis wasn't helping me any but the guests were alert enough to see this Otter munching on the shore.

We couldn't relocate this one in the choppy water so we moved on to a more sheltered spot to try again. We picked up the mother and cub almost immediately in the water but they moved onto the shore for a bit of a groom.

No apologies for the quality of that shot as it was way too windy to get a clear one! We missed out on most of the waders today as they were seeking out the sheltered spots that we couldn't view so we ploughed on. A Kestrel hovering at the side of the road had me reaching for the camera again... 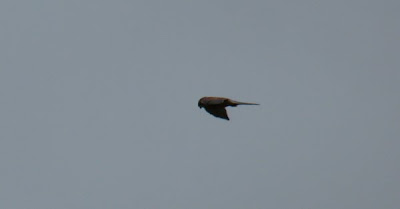 We had the company of a Golden Eagle for the whole of lunchtime as it scanned the area looking for something to kill. The wind was starting to increase so we decided to head for the Mountain Hares and then work our way back - it turned out to be right choice too. We bagged a few Hares, 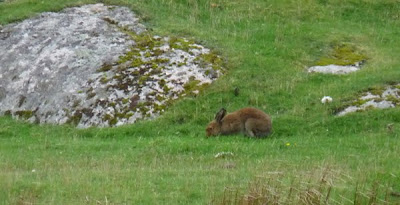 Raven, Greylags, Curlew etc before seeing a raptor disappear behind a mound. We chased this one up to find a female Hen Harrier quartering the ground.

Again it wasn't good weather for standing up in and there wasn't much light! We'd managed a cracking day when it could so easily have been a disaster.
Posted by Bryan Rains at 08:30

Hey you guys really suffering on the weather front aren't you. There was an article in The Times today about how bad it is - certainly Rob's grain up in Aberdeenshire not great I think this year.

Anyway - thinking of all of you and it looks like I will have to buy a cagoul or similar for my trip north in November - to think that I didn't even bring one with me back in June - not a single day of rain back then, just amazing sunshine. You know what they say about who the sun shines on....

Take care - great blog as ever