Thursday was a wet one and thankfully I wasn't out.
Friday was a bit of a contrast though. It wasn't constant rain so we played dodge the shower all morning with the promise of brighter weather in the afternoon. We started off with a nice Red Deer stag that obligingly hung around for my return with the guests on board. Better again there were two of them on show! 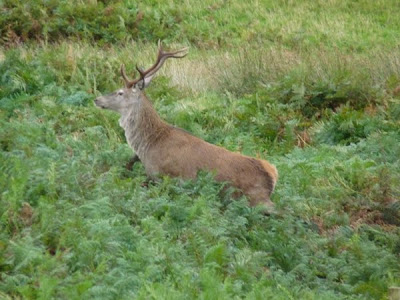 Next stop was shower dodging and an obliging Otter that was leaping about in the strong currents. It eventually disappeared behind some rocks and didn't come back out. The WT Eagles performed brilliantly with the male perched in a tree, the juv flew by and landed out of sight. We were busy moving off to see if we could relocate the youngster when the female appeared, carrying prey, heading in the direction of the youngster. 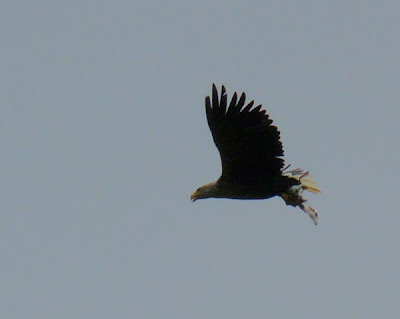 There was a real cloudburst as the female came in but we managed to locate the two birds sitting together before we retraced our steps. While checking out the seal colony one of those sixth sense moments occurred - I turned around to find a Golden Eagle checking us out! Naturally it moved off as we gawped at it but it was a magic moment all the same. 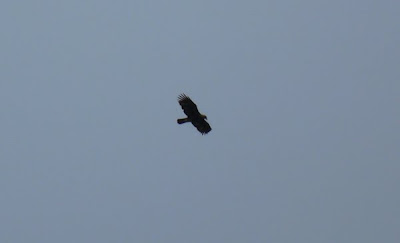 The afternoon was a bit slow in comparison to the mornings effort but we enjoyed good views of an Adder, plenty of waders, Mountain Hares bounding around the fields and the last of the young Swallows shouting for food while sitting on the fence. The sun was a welcome addition to the day though!

Saturday was payback time for the day off on Thursday. Driving rain and a strong wind. Otters were top priority for the day and with the prospect of a difficult day we decided to target them before doing anything else. First thing on the list for the day was the juv WT Eagle. We picked it up in flight while it was low down and it looked like it was going to land as the legs kept dropping. Naturally it landed out of sight so we headed off to see if it could be relocated. Sure enough we found it standing on the ground with some tasty morsel and the attentions of the odd Hooded Crow - they look like Sparrows next to the eagle! We travelled on with the weather worsening all the time - the loch was sporting white horses and the rain was relentless. Naturally the wading birds and ducks were still on show as were the seals but we were struggling with wet optics and steamed up windows! We checked everywhere for Otter to no avail so we decided to stake them out at lunchtime. No sooner had we arrived at the chosen spot for lunch, stood in the full force of the elements, and I could hear an Otter squeaking away - it had to be the mother and cub but where were they? The squeaking stopped and we scanned the general area and eventually a head broke the surface in the choppy water closely followed by another head. We got drenched watching the two Otters fishing and eventually they were lost to sight. The main aim of the day was out of the way so we travelled on to see what else we could dig out. We managed to see quite a few Red Deer on our travels but the weather was beating most things into hiding. Fleeting glimpses through watery optics was the best we could do! A brief spell of brighter weather later in the evening allowed me to get another shot of the Knot from a reasonable distance. 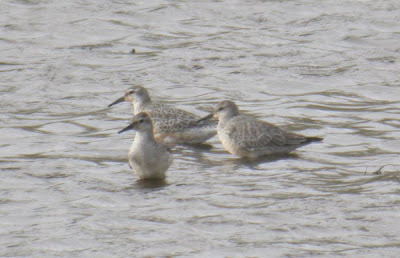