Yesterday was one of the best days we've had this year - proper T shirt weather! There was very little wind and the sun was beating down and I start flagging if it gets above 12C but I soldiered on. The Otter in Loch Beg should be an easy hit in flat calm conditions but there was barely a ripple to be seen and so flat you could see Divers on Loch Scridain with the naked eye about half a mile away! A small troop of Skylarks kept us amused and then a female Hen Harrier was spotted patrolling the far shore but heading our way and then the tell-tale ring of bright water - an Otter at the mouth of the loch. A drive round to get a better view improved things with this female Merg sitting pretty in front of us. 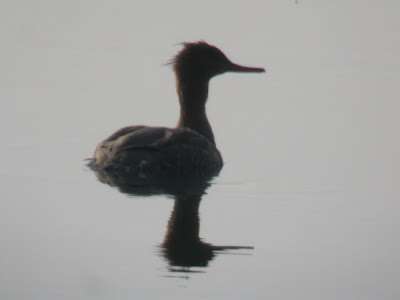 You could hear a pin drop it was that quiet so a bit of a splash off to the right had me waiting for something to surface not too far away.......another Otter and this time close enough for a quick shot. 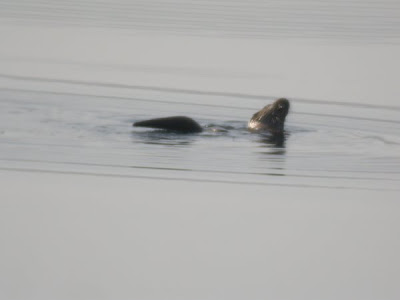 A Red-throated Diver still in winter plumage, but reasonably close, was a nice bird to see but getting the camera out put paid to that. They can travel a reasonable distance under water and this one gave a prime example of that as it headed for open water - maybe next time. We took in the WT Eagles and a few Stags along the way but a group of birds on the loch, backlit, were worth a second glance. A group of 11 Whooper Swan had dropped in for a short rest before moving on North again. 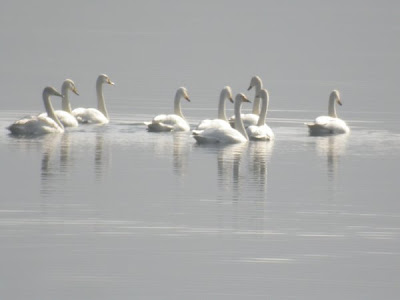 Another location was looking pretty dire until an explosion of birds from the forestry had me diving for the scope. First bird in the scope was a male Hen Harrier with a Kestrel mobbing it. I checked the rest of the birds and was surprised to see it was 2 male and 2 female Hen Harriers with a pair of Kestrel mobbing them - quality! A White-tailed Eagle sitting on a rock gave us the opportunity to check the plumage of a sub adult bird with the bill all yellow and the plumage fairly plain it was a 3 year old bird. I was just reaching for the camera when it flew off.

Lunchtime gave us our first sighting of Golden Eagle with 2 birds circling round and gaining height rapidly and soon lost to view. I checked out the frogs spawn which has all hatched now. 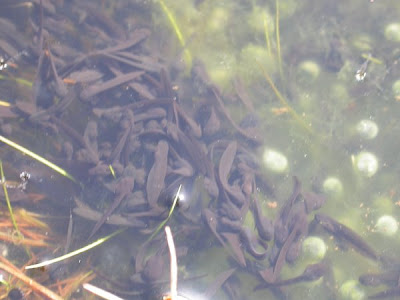 In the same pool were 2 Palmate Newts which were nice to see but no sign of any Adders anywhere. I guess they had warmed up early on and were out feeding. I had to go back there this morning to check for Adders and also to get the photo of the wee tadpoles! A nice stroll on the beach produced nothing more exiting than a few Rock Pipits and our last call of the day bagged another Hen Harrier and also my first Mountain Hares of the year in the daylight. 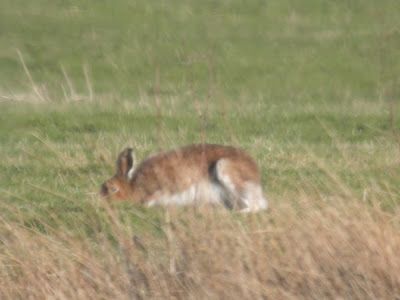 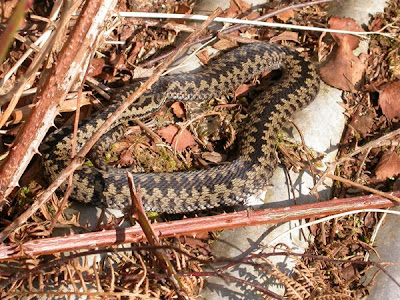 ......and some Primroses that are now starting to show. 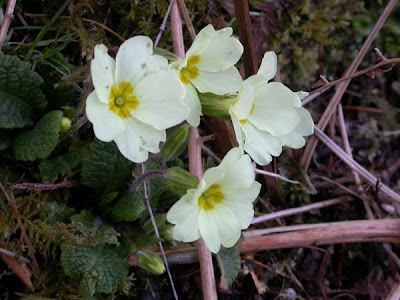 Great photos. I can't get over the number of geese in that picture and yikes over the snake!

I had 45 Whoopers at Cresswell early morning on Thursday, tight knit and head popping.