Yesterday was a bit of an exceptional day with 63 species of birds seen. It was another windy one with a few showers in the morning and one of those days where you think it's going to be hard work. None of the photos in this post were taken on the day so I've used some gratuitous shots. Scanning any body of water round Mull will always produce a few birds so the best of the bunch on the water were 2 RT Diver, a couple of Razorbill, RB Merg, GN Diver and an Otter. We found a lone Dunlin on the shore of Loch Beg sheltering behind a rock but it was a distant view through the scope which was being buffeted by the wind.
A couple of Adders were seen while having lunch but raptors were a bit thin on the ground. All that was about to change......a Sparrowhawk made a brief appearance closely followed by a sighting of Hen Harrier. A short wait and plenty of scanning later and we had a distant Golden Eagle that landed on a rock before everyone got a view. Ten minutes later it was back in the air and heading towards us with a Raven mobbing it - a good size comparison.
A change of location to Uisken had a Sparrowhawk flashing past us and out of sight. Two Northern Wheatear were easy to spot sticking to prominent positions and 3 Common Snipe burst out from some vegetation as we walked along the beach. A cracking female Hen Harrier gave good views as we left the area.
Loch Pottie was holding 10 Whooper Swan and 4 Tufted Duck which were nice additions to the list for the day. Fidden was the next stop and was to produce the biggest surprise of the day. We'd had the WF Geese already and the flock of Barnacle Geese were just coming in to land as we arrived. Lapwings seemed to have increased their numbers with at least 200 birds present and the Golden Plover were holding steady at 100 birds. A couple of Mountain Hare were added to the list but didn't stay in view for too long. We were given some info that 3 Eagles were not too far away so off we went in search of this 'pot of Gold'. It didn't take too much time to find one of the Eagles and with the scope on the bird while it was sitting we got the ID - Golden Eagle! Another bird was picked up sitting not too far away and a third bird joined the group - 3 Golden Eagle together was a fabulous sight to behold. They were all young birds and presumably had a carcass in the vicinity. A Peregrine put in an appearance to try to distract us from the Goldies so we paid it homage and it eventually perched up on an outcrop - quality. 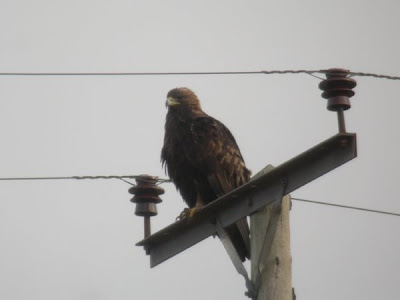 As we were leaving Fidden in driving rain we got some very close views of Mountain Hare that made up for the brief views we'd had earlier. 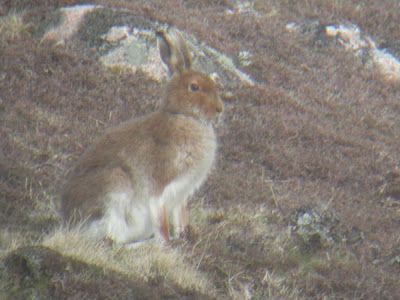 The drive back to base was disrupted by a shout of 'large raptor on the left!' - out of the motor to be graced with the presence of a juv Golden Eagle soaring round. There couldn't be much more surely.......a mile down the road and another shout 'two large raptors', another rapid exit to be faced with 2 adult White-tailed Eagle - what a way to finish the day. You never know when it's over! 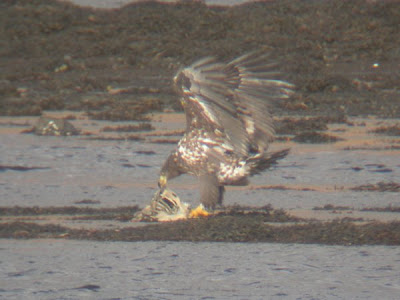 Nice descriptions and photos! You sound like a proper birder-I'm more of a Simon Barnes type of birdwatcher.The last shot is a bit grisly but very cool!