Tuesday was a pleasant day, as the previous post explains, but these calmer conditions give me a chance to count the GN Divers on Loch Scridain in the evening. The birds spend the night in a group or two so a late visit gets a good count plus a nice sunset etc. I managed to get to the loch just before dark but the telescope manages to save the day. There was a real haze over the surface which hampered the count too. A group of 8 took a while to find but once the general area was located it was easy to find some more. The next group contained 8....no....9....no....12 and one further back? Still wrong!! I settled on 12 including the 'one at the back' after they strung out heading for the first group. A total of 20 isn't too bad for this time of year and there could be more further down the Loch - I'll keep you posted on that one.
Wednesday was a bit of a wash out but the Golden Plover, Shelduck, various waders were all still present and a Yellowhammer was singing out the back of the shop. I spent most of the afternoon staking this bird out and never seen it once!
I stepped out this morning to see if the Shelduck were still present and found they had morphed into 2 Whooper Swan overnight - it must be funny water out there! 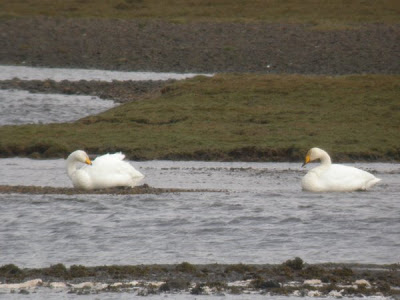 I spent the rest of the morning watching the final touches being made to the White-tailed Eagle nest - a pleasant way to while away a couple of hours. A Golden Eagle giving an all too brief burst of displaying was a nice supporting act.
I guess I was inspired by the WT Eagles doing housework and I went home to do some chores (I'll get some ribbing for that) and watch the feeders in case the Yellowhammer put in an appearance. Chaffinches are abundant up here the same as most places but a treat to watch as they squabble over the dining table and they aren't keen on any other birds joining in. The Coal Tits dash in and dash back out again, Great Tits will stand their ground but are usually beaten by the numbers and best of all is watching a Collared Dove being harassed by a Chaffinch! 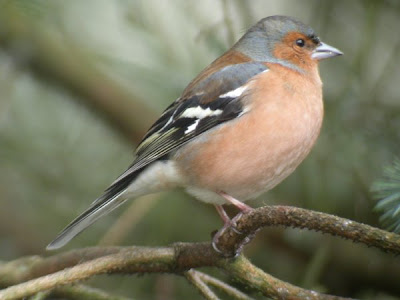 Cheeky Charlie
My favourite bird in the garden is the Dunnock. He scuttles along the ground or in the undergrowth like a feathered mouse. I watched the Dunnock doing his thing for about 15 minutes (while doing the dishes - that's about one item per minute) and thought that I had better give him a mention on the blog. Out came the scope and the camera and in went the birds.....next doors cat had the birds scattering again but Boris has no interest in birds he just wants some dinner, Sunny was out on the prowl somewhere so I was hoping he wouldn't come back just yet. Then I caught some movement in the Honeysuckle and sure enough it was the Dunnock, skulking at first... 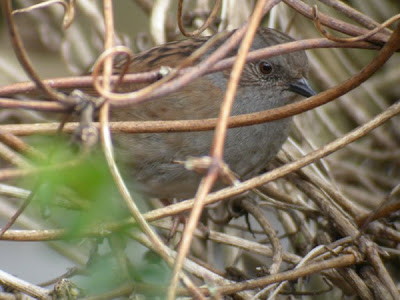 .....and then showing well....a stunning bird when you get a good look but most of the time he's overlooked so let's hear it for Donald Dunnock!!!! 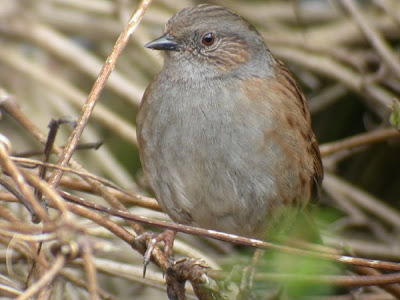 Much underrated bird I reckon.

I first Identified a Dunnock whilst in a hide at the Hauxley Nature Reserve near Druridge Bay Northumberland, I love to watch these little birds scampering around in the undergrowth and now that I know what I am looking for, have seen one recently in my garden and look for it every day when I am doing the dishes. I agree a very underrated bird.
Michelle (birding about northumberland)