First off an apology for the photos in the last post. None of the images will open so it kind of spoils the effect and I can't seem to fix the problem without going into the HTML. I don't have the time for that so I'll just have to post better photos - hurrah I hear you cry!
Saturday night saw the weather break briefly and the wind dropped too so an opportunity to get a nice reflecting image from the doorstep. It's an awesome sight every time and you have to get an image - I could probably fill a book with the selection I have! 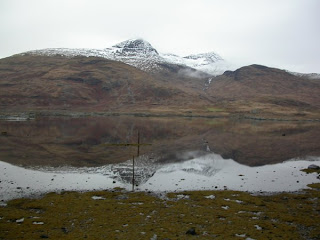 Earlier on Saturday I had been volunteered to help out with someone moving house. As I was waiting for the wagon load of furniture I was parked overlooking Loch Scridain with the rain lashing against the windows when something caught my eye. What I had seen was something akin to a torpedo flying through the water which I knew would turn out to be a duck of some sort. I cleared the windscreen and peered through the bins to find a female Goosander that was hunting fish. I'm sure most folks have seen the likes of Mallards powering themselves through the water in a similar fashion. What was awesome about this was watching the fish leaping out of the water in front of the bird! It certainly kept me amused while I was waiting.
After unloading the furniture and on my way back I saw this Buzzard on a telegraph pole drying it's wings. It would have been a better shot from the front of the bird but you can't win 'em all. 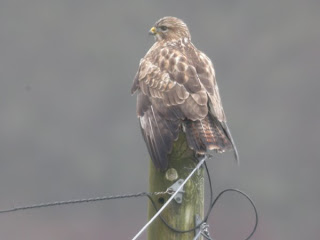 This mornings outing was pretty fantastic too. A quick jaunt out to try and dodge the squalls and see what is out there. I got soaked at the first stop which was nice and I didn't notice the camera getting a soaking too - oops! It really was windy so not too much to tell but here we go.....5 GN Diver were no surprise but the summer plumage Red-throated Diver was a cracker and too distant for photos. A distant Otter was soon lost in the choppy water and 3 Shelduck, 2 Eider, 3 Black Guillemot wasn't enough to hold me. Just as I was going to pack everything away I had one last glance out over the water and there was a large bird approaching rapidly. An adult White-tailed Eagle was flying straight towards me, binoculars up, stunning, then almost too close, binoculars down and watch it sail by 30 yards away about 20 foot off the ground. That would have been a good shot but I was stunned - AWESOME!!!! I grabbed the camera to get some hand held shots but I knew it would do no good. I took a few shots in the 45 seconds or so it took for the bird to ride the updraft of the cliff till it was a speck in the sky. I got the bird in the scope, full extension and pointing vertical, and I swear it was laughing at me. Anyway here is a cropped shot of a bad photo - I'm still grinning though! 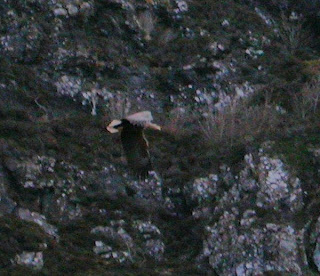 Managed to get out and do some raptor watching of my own. Goshawks displaying and peregrines mating, not quite eagles but it'll do for me.

Buzzard's - I thought they were called Bowman's eagles up there?

Thing - how about if we do a swap an Eagle for a Grebe or even a Med Gull?

Mark - It's all a matter of perspective. I don't get to do any twitching up here unless it's a Coot!

Ipin - Bowman's Eagles are rife up here and it's difficult to tell anyone what they really are!!