Thursday was a bit of a black day as that was when the Internet went down!! A phone call to Broken Technology was a delight.

ME: Hello, any idea when the problem will be fixed?

BT: We're very sorry for the loss of service. We have engineers looking into the problem but no other info. There are only 18 households affected. Ring the service update line.

ME: That's everybody here and it doesn't matter how many people it affects. There must be a timescale!

BT: I know nothing. We're sorry for the inconvenience.

ME: That's very helpful, thank you.

Or words to that effect. I had a look at the telephone exchange - nobody there. I like it when they work hard. It's now Monday and they've fixed it thankfully. 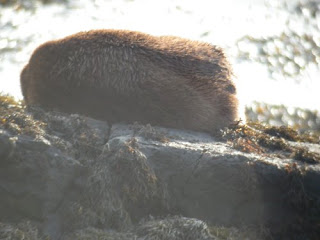 I managed to get another year tick on Thursday morning while out for fuel. A quick trip down to Fidden produced 4 Shelduck in a howling gale and also 4 Reed Buntings that couldn't get any closer to the ground without turning into Moles!

I was busy with non birding things over the weekend so no reports there. Today I had to go to Tobermory so I thought some birding on the way back would be nice. Bloody hell, it's cold out there!! A large part of the country is buckling under a small drift of snow so I'm posting a photo of a nice furry hat that was sleeping on the side of the Loch. 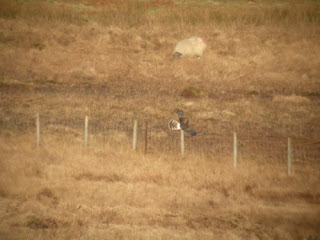 It's seems like quite a few people have had to try their hand at digiscoping birds in flight. I hate it because it doesn't work well. The local Hen Harrier has been playing games with me for over a fortnight. I go and sit in the regular hunting spot and she appears somewhere else. If you find her she's off like a shot....except today! She appeared in front of the car and headed off in the same direction as I was going thanks to the Easterly wind. Foot down and try to get in front and then wait. As soon as the bird passed me I was out with gear set up in double quick time only to find she'd dropped out of sight. I was just about to take the camera off the scope when up pops the bird again. I start firing away - the first shot was a peach of a view but blurred. AAARRRRRRGGGHHHHH!!!! A bit of persistence produced a photo I was happy with. Now I don't have to try so hard next time!
Posted by Bryan Rains at 14:06

Don't get me sarted on digiscoping, my ancient gear just doesn't seem to work despite it all being Leica.

Dont get me started with internet problems, seems that my server has fell out with Firefox as of late. I gave up on digiscoping a while ago, but bird photography still manages to annoy me from time to time. Loads of snow down here at the moment, not ower canny for taking pics.