I spent yesterday afternoon with some people who wanted to see Otters and anything else that was on offer. We set off round the loch and managed to pick an Otter up quite quickly but it eluded any close viewing so we kept looking picking up GN diver, Slavonian Grebe, RB Merg etc. Another Otter was located within half an hour and this time gave prolonged views while fishing and eventually hauling out on land - a marvellous sight! A pair of Golden Eagle sitting on the top of a hill was the best of anything else that we saw but it wasn't bad for a couple of hours out.
Today was a bit of a fiasco as the folk who booked a tour didn't turn up but not to be deterred I had a tremendous time. Despite the inclement weather there was plenty on show - 6 Skylarks passing through from the East, Grey Wagtail going in the opposite direction, an increase in the Lapwings to 20 birds, 8 Ringed Plover, 3 Goosander, a Golden Eagle in the distance disappeared in the Glen and 2 Hen Harriers quartering the marshy area. It was busy enough for the time to fly by. Another scan around produced a juvenile White-tailed Eagle that disappeared over a ridge but it would be worth keeping an eye out for that one and I got more than I bargained for.
A jaunt round the loch in the rain wasn't a great prospect but with what I'd seen already it couldn't do any harm although photos weren't going to be a priority. A couple of Otters in Loch Beg were too far away for the camera but always good to see. This Heron was waiting the weather out and not in a hurry to move - a photo opportunity. 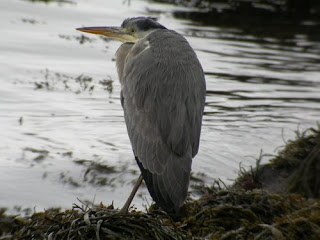 On the return journey I had a seriously close encounter with what I presume was the very same WT Eagle that had disappeared over the ridge earlier. It came up off the lochside and almost got wiped out but the bird seemed unconcerned which is more than I could say!! The Eagle kept on flying away from me and into a ride between the trees and appeared to land. Gathering my wits I continued down the road and got into a position where I could view where the bird had disappeared. Sure enough Lucky was sitting on a branch laughing, I guess! 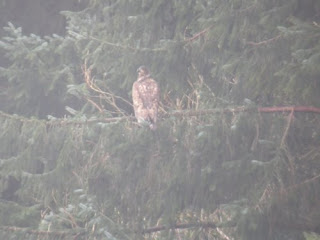 I returned to home base for lunch and a change of underwear before setting off to refuel the motor.
The weather was really closing in and the wind was picking up so I wasn't expecting to do anything but do the refuelling. There is always something out there that gets you to stop. As I was driving through Bunessan I noticed an Eider on the sea, not too far out. 'I'll have a go at photographing that on the way back' was the thought. On my return the bird was still in reasonable close proximity and as I looked through the scope I noticed the odd bill colour. I'm no expert on the borealis Northern Eider but it looked a good candidate in comparison to some photos that I have seen of this subspecies. I'll probably have to go back tomorrow for a better look but any comments are welcome. The only thing this bird has going for it is the orange bill. I didn't see any 'sails' but most of the viewing was through the camera (bad move) and the photos aren't really clear enough. 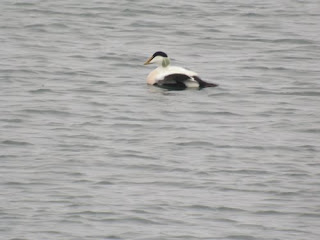 Not much else to report but the 2 Raven that were sitting pretty on a cliff top. I got soaked for that shot and it's not even a good one! Still, there is always tomorrow. 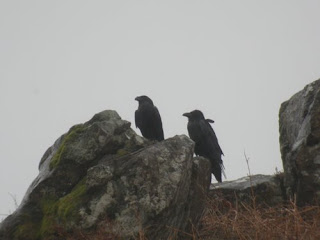 Check out Martin Collinson's site for some interesting stuff on Borealis. Can't enlarge your pic for a better look, but looking at what I can see doesn't look bright enough.

Cheers Alan. I'd send you the image but I doubt it would make a difference. I'm going to have to study the bird today I guess. Good info on these websites http://keenbirding.com/NEFall06/borealis281206.html
http://www.birdsireland.com/pages/site_pages/features/eider/eider.html
It's a bit of a minefield re bill colouration and this bird is on it's own so there may be no encouragement to raise the sails. We'll see!