Got up this morning and while leaning on the gate enjoying the view the Hoodies started shouting. First one bird then two......something going on for sure. Six birds erupted from behind a bank, grab the bins......six Hoodies and a couple of Common Gulls making like there is something to shout about. Scan about and there it is, a dead bird for sure but what kind? Got the scope out for a better view. Dark chocolate brown plumage and grayish legs was all I could make out so rule out all the ducks and gulls. Looked like it was Mallard sized but definitely not one of those. Off with the slippers and on with the boots, I'll have to walk over and have a look......could it be a Skua perhaps? A quick hop and a skip and I was at the scene of the crime, walk round to the other side of it to find it was............................a chicken!!!! 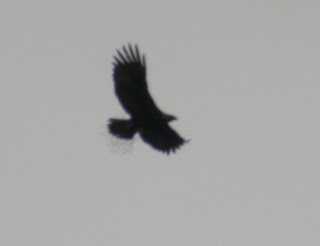 Overcast and still blowing hard from the East meant it was still Baltic out there. Plan of attack today was to find the sheltered spots and see who wanted their photo taken. The windy days are always good for raptors to be sailing about so I headed up one of the forestry tracks to see what I could pick up. Golden Eagle just dropping behind a ridge and another further back but staying in sight. What a fantastic sight to see these birds using the wind to their advantage. No effort required at all. The wind speed must be about 15-20 mph, not a strong wind by any means, but to see the bird turn into the wind, close the wings a bit and gain speed at a phenomenal rate is just awesome! Not sure what the bird was after as it dropped behind the forestry just as the legs came down but I would have been worried! Fifteen minutes of waiting for something to reappear produced nothing then this beauty floated up from behind the closer ridge. As you can probably see the bird has a sizable piece of shrubbery in it's talons, it must play hell with the aerodynamics but still an effortless flight! The Eagle dropped out of sight again after while so I moved on. 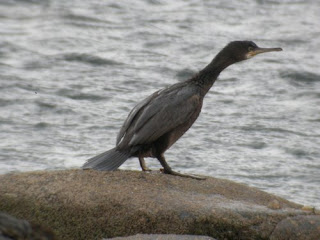 There were other raptors around but I just couldn't get a shot. A couple of Buzzard just cruising by carrying food would have made for good viewing but it wasn't to be. I had a Kestrel nicely lined up till it decided otherwise! Another Buzzard on a telegraph pole just wasn't having it either.
Scanning the sea Loch produced very little as it was very choppy so 3 GN Diver, 1 Kittiwake and a handful of Shag would have to do. Approaching home I saw this Shag drying out so I jumped out, set up and got a couple of shots before he decided it was rude what I was doing. The only other exciting bird I could find was a single Cormorant. Whoopee, I hear you cry, but I'd swap it for a Coot or a Moorhen!
Posted by Bryan Rains at 14:26