Just a quickie today as I've been off Island up to Fort William again. I took all my gear this time, or so I thought!
It was an early start as I had to get the first ferry from Fishnish at 07:25. Driving from home to the ferry had us disturbing 3 Barn Owls, 2 Common Snipe and 5 Woodcock - not a bad start to the day. Arrival at the ferry terminal, with the day just starting to break, the birds were singing their hearts out. A quick scan of the Sound of Mull didn't produce anything but it didn't matter with the stunning view of Morvern and a flat calm sea.
The drive up to the Corran ferry was uneventful but with no time to waste it's no surprise. As we arrived at Ardgour and the ferry just leaving it was time to have a look on Loch Linnhe. 4 Eider, 3 Shag and 9 Black Guillemot - a camera opportunity. Into the boot I go and there is no camera - I'd left it beside the computer after downloading yesterday's photos!! An opportunity lost - eight of the Guillemot were summer plumage birds but the other one was still in winter dress and all were as obliging as these beauties can be.
I cheered myself up with a big breakfast in Morrisons - no substitute at all but you have to try.
We had some time to spare on the way back to give us a chance to look around before returning to Mull. The one stop we made along Loch Sunart had me cursing the lack of camera equipment. I was looking through various gulls, Oyerstercatcher, Goldeneye and then an Otter......no.......2 Otters....no camera.....they're close too.....I don't want to look! They put on a marvellous display of fishing in shallow water, head down and tail sticking out, then one of them caught a large fish. It's heading for land - the camera would be handy - it loses the fish but undeterred it hunts it down again. I'm not watching this so I leave the scope and scan further up the Loch and see.......another Otter - oh the pain!! Back to the original two and the fish is hauled out and minced in minutes and the 2nd Otter is having no luck so it makes for the shore. The two of them meet up again, mother and cub, and indulge in some delightful wrestling - a fantastic sight. The third Otter was the dog, lazily fishing in the middle of the Loch. I'll be happy with the memories of this encounter as it was unexpected but I do wish I'd had the camera!
Obviously not a photo from today but it is an Otter eating a fish! 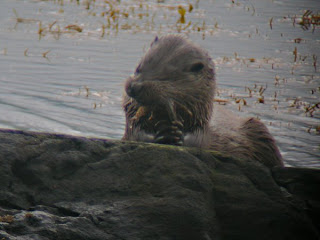 Good to see there's finally a blog so I can be extra jealous of your beautiful location. Still wanting to return after my fantastic holiday there in 2007.

Cheers Mark - good to know you are still out there. Give our best to Tricia too.