Monday was a very pleasant day indeed - sunshine, no wind,what more could you want. A bit less of the bright stuff and a bit of a breeze would do nicely thanks. It's actually getting a bit warm too - what's that all about? I had PS on board for the day so we headed off to see if we could see any ripples in the glass like surface of the loch. Even a blind man wouldn't struggle with Otters when it's like this. If you can't see them you can certainly hear them diving, surfacing or just munching on fish - fantastic. We had one that was close...

...but it didn't want to play and another that was happy to be seen but it was distant.

It's never a bad start that! The Little Grebes are still bobbing about as are the 2 male Goldeneye and good numbers of RB Mergs too. We headed a bit further round the loch and bumped into the first Otter again. We headed off in front of this one and waited for about 10 minutes only to find out it had turned around and headed the other way again - ah well. Next on the hit list was a nice GN Diver, beautifully posed, nicely focused and then the battery went flat - great stuff! New battery, bird in bad light and the camera won't focus so this was the best of a bad bunch. 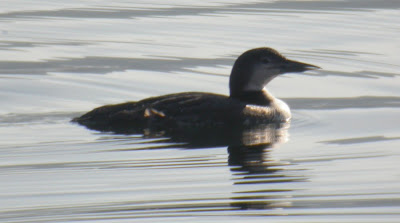 About half a mile up the road, looking into the sun, we could see some lumpy things bouncing about on a point of land so we drove a bit closer. Sure enough the lumpy things were Otters - 4 of them this time but too far away for photos. We watched them for a while as they were fishing and eventually we just moved on. A Buzzard sitting on a regular perch waiting for it's breakfast. 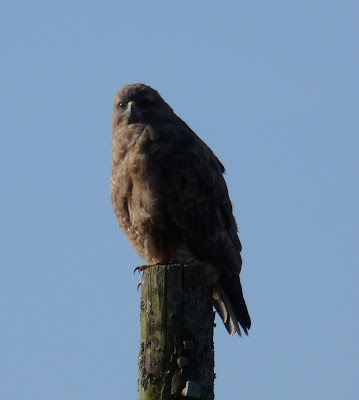 A small flock of of 15 Greylag Geese were keen to run away from the camera... 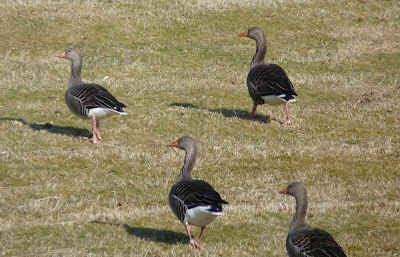 ...but a Chaffinch that was singing it's heart out performed a bit better. 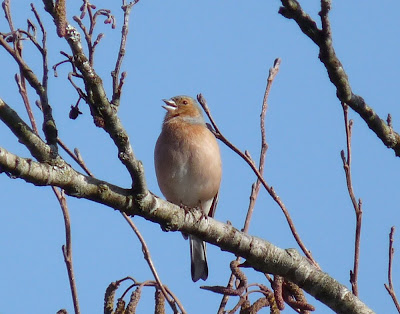 A few Siskins were flitting about in the gorse bushes close by but there was hardly a chance of getting a good view never mind photos. Our next stop had us puzzling over a strange call that was coming from the conifers. We searched the trees and made our way closer but couldn't find anything other than Siskins. The call seemed a bit too deep for Siskin but I guess it must have been them. We called back on the 4 Otters but they were still in the same place and not looking like they were going to come closer. While watching them a GBB Gull started alarm calling and diving at a spot that we couldn't get a view of. It was agreed that there must be a WT Eagle sitting there but PS wouldn't count it unless we'd seen it - some people eh? We drove to a spot where we could see, an 8 mile drive, and sure enough there was a WT Eagle - the things you do for a sighting of a bird! We did get a BT Diver from the same spot so it was worth it really. A few Common Seals hauled out on some offshore rocks had us wandering out onto a point where we could photograph them with quite pleasing results.

It was nice to see a Pied Wagtail on the beach on our return walk and a couple of fly over Bullfinch were a good addition to this years Mull list. I dropped PS off and headed for home and got a lovely shot of a few RB Merg....

...and another GN Diver that is just starting to come into Summer plumage. 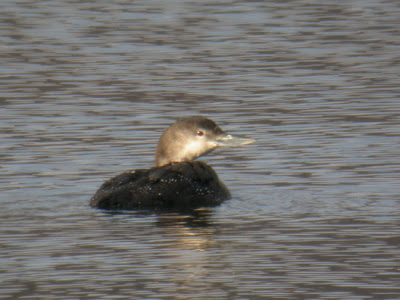 A whole bunch of waders had dropped in out the front of the shop just before the sun dropped. 20 Golden Plover, 14 Ringed Plover, 1 Dunlin, 10 Lapwing, 1 Greenshank all beautifully lit up by a cracking red sun. It was a shame it was too dim for the digiscoping to work but this shot gives a good idea of the colours. 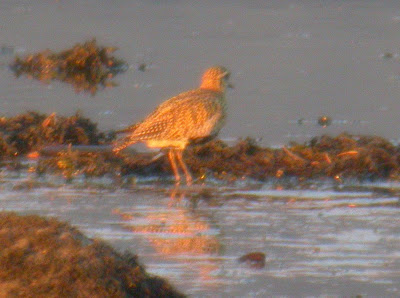 Tuesday I was out on tour in good weather conditions again but a bit more wind. We had a good start with the two Otter in the same place as the previous day. A WT Eagle sitting on a nest and a Golden Eagle briefly above the ridge. It was looking like it would be a slow day for some reason but we plugged away and gathered quite a list over time. 4 WT Eagle were performing over the ridge and giving the impression they were heading towards us but they were gaining height all the time. A Yellowhammer that kept itself in thick vegetation was a first for me this year. Three distant Golden Eagle and an Adder at lunchtime and we were thinking there wouldn't be many photo opportunities left. As you know it can all change in an instant. A Sparrowhawk was perched on a wall but it was away before we had a chance to get a shot at it then we had a Hen Harrier that was against the sun but we waited for it to drift overhead into better light. 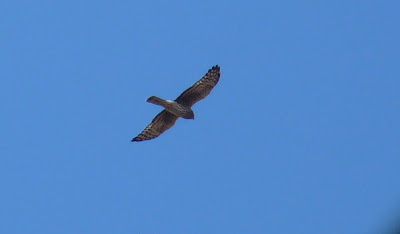 A Mountain Hare posed superbly as we rattled off a few shots. 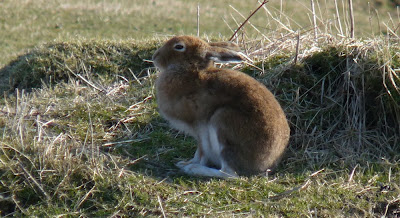 The WF Geese were busily wandering off down the field while we watched the Hare. Twenty Golden Plover were in the same field with a few Lapwing in amongst them. 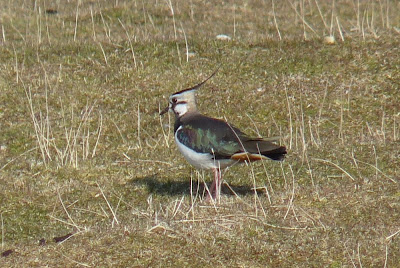 Saving the best for last - we'd stopped for a cuppa and a scan of the ridges and picked up a couple of Golden Eagle in flight, the drinks were finished pronto and we were off. As we drove towards the Goldies we picked up a bird flying fairly close so we stopped for a better look - WT Eagle! We moved on up the road to find the two Golden Eagle sitting side by side on the top of the ridge. 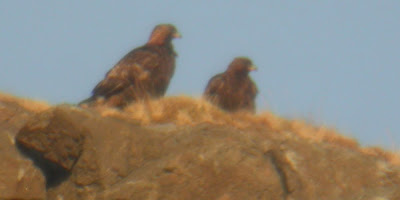 Not the best of shots but it was a cracking sighting as they sat in the sunshine and better again when they flew off together. Another cracking day out!
Posted by Bryan Rains at 18:10

Hi Bryan think your guets had a really good day.

Wow!! More great shots! So fantastic to see a mountain hare! I really hope to see one when I come in May!!
Maria

Another Brilliant blog update! what a great veriaty of wildlife on show, Im planning a trip upto Mull at easter time! cant wait