First migrant of the year!

Sunday wasn't the best day weatherwise but it didn't matter as I had other plans that didn't include birding.
Monday I was out on tour in pretty miserable conditions but what a day it turned out to be! With the guests on board we headed off into the drizzle hoping we could dig out a few nice things for the day. First good birds on the list were a small flock of Rock Dove sitting around on the heather. At our next stop to scan through a flock of Herring Gull produced the first migrants I have seen this year in the shape of two Lesser Black-backed Gulls - excellent! We bagged four Tufted Duck on a freshwater loch before heading into a more exposed area where we had to deal with the stiff breeze. The Greenland White-fronted Geese numbers were down to six birds so they are obviously starting to make their way back North now. A real treat was just around the corner as we located 6 Twite sitting on the fence. Naturally they started to fly around as the camera came out! Four Fieldfare distracted us as we scanned through the 50 Golden Plover in the field and then we turned our attention back to the Twite. I finally managed to get a couple of shots of these delightful little finches but with poor light it's not the best. 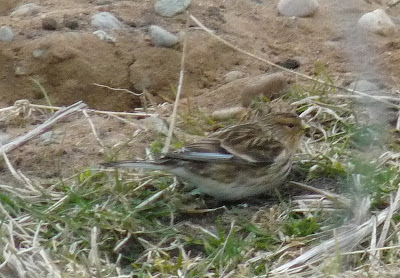 A couple of Common Snipe lifted as we made our next stop to look for Mountain Hare. Windy conditions are never good for looking for this species but if you look hard enough you can usually turn one up. Digiscoped in poor conditions but you can still tell what it is! 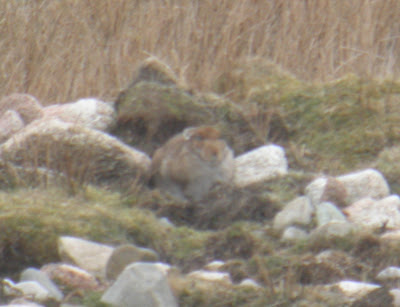 Another new bird for the year at the next stop were three Kittiwake flying over the sea. A couple of Ringed Plover were difficult to pick out against the sandy beach just before we left the area. The weather started to close in a bit after that but we'll count ourselves lucky to have found an Adder in the poor conditions. It just shows it doesn't have to be a good day to find things! With none of the real biggies on the list we were hoping for a clear spell to change that a bit. We got some sunshine at lunchtime and a cracking view of a male Siskin shining bright but it wasn't long before the rain started again. It wasn't looking too good on the Otter front so these two WT Eagles kept our spirits up. 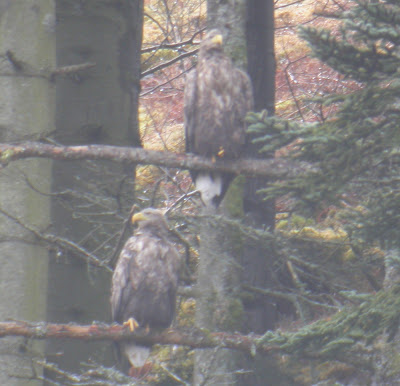 Just as I was setting the camera for this photo another bird appeared behind us. Golden Eagle was mentioned but all I could see was a Raven disappearing from view....and then a bigger bird appeared! It was a Golden Eagle after all - what a result! We thought our luck was in so we headed off to search for the elusive Otters - fools! Not a sign of anything furry in the water but good views of GN Diver. We even had a cuppa while we waited and still nothing happened. It was almost written off as one of those things that happens - a no show. We'd moved on taking in a few Red Deer stags along the way and we stopped to have a quick check of the tidal area and there was an Otter making it's way towards the loch!! It was time to call it a day as the rain started again. We did get a nice view of this Raven just before close of play - cracking! 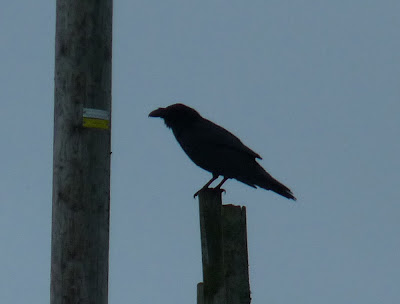 Today was a lot better weatherwise with high cloud, no rain and the wind blowing from the SW. Sadly it was another day away from birding but I did take my camera out early on to get a couple of snaps of the pet Heron. 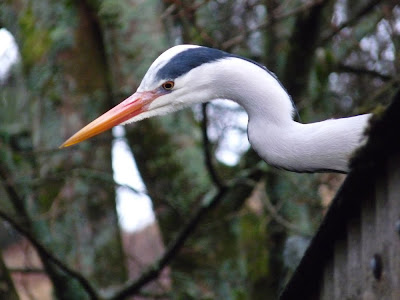 'Got any scraps for the poor starving me?'
These birds eat more cat food than the cats! Just a couple of other photos from today - the first one is not so good but there were two Buzzards flying around and I didn't get a decent shot of either of them! 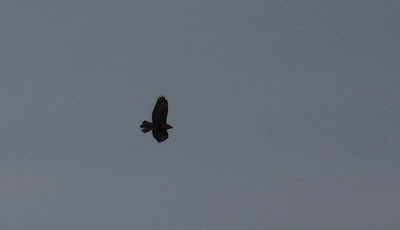 Next one is a view of the Ardmeanach peninsular or Burg if you like, where the fossil tree is.

Last of all something I forgot to mention for yesterday - I found my first Primroses of the year. It was worth taking the camera to get these beauties. 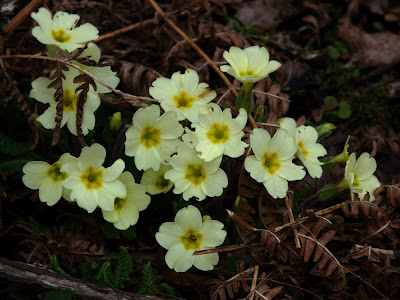 LBBGs are defo on the move, I had my first of the year on the patch at the weekend too....