Saturday I was out with f-stop to try and see the Waxwing again. The weather didn't look too bad but the odd shower pushed through here and there. We headed off to the East side of the island and soon came across a flock of Whooper Swans. Fourteen birds in total with four of those being youngsters. 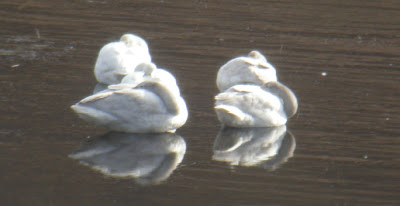 On arrival at the Waxwing site the first shower started so we threw a few apples out into the garden and waited to see if anything would show. All the usual garden stuff was kicking about - House Sparrow, Blackbird, Song Thrush, Chaffinch and Starling were all noted with the occasional Greenfinch flying over but no sign of the waxy one. We retired to the motor as the rain continued to fall and no sooner had we got there and we were staring a Treecreeper in the face over the fence. Cameras at the ready and shoot.... 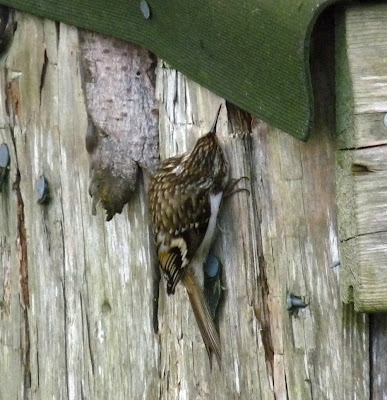 It's the first Treecreeper I've seen on Mull this year despite Shop Lady having a couple of sightings at the back of the shop. We looked for the target bird again but to no avail so we decided to move on and call back later. As soon as we had a view of the bay there was a noticeable large lump sitting out on the rocks - a juv WT Eagle minding it's own business. After moving into a better position I hauled out the scope and digiscoped the bird. 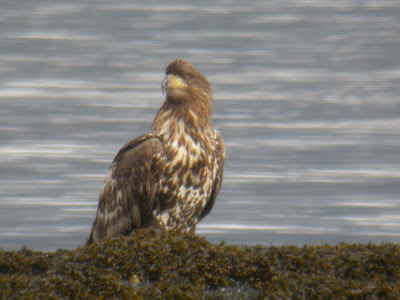 F-stop had seen the bird in flight and had noticed the bird had a satellite pack on so we moved to a position where we could see the aerial and possibly the pack too. Good job we did as there was an Otter fast asleep just underneath the eagle! A Little Grebe was fishing just behind the rock and a Black Guillemot was also noted. 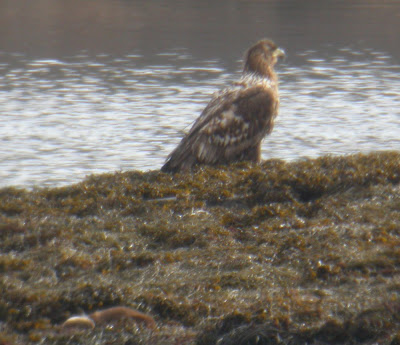 Not the best photo in the world but you can see the Otter in the bottom left and the aerial sticking out of the back of the eagle. As we were close to a Dipper territory we thought it rude not to have a look. A single bird was located doing dippery things on the river - just a wee bit too far for the camera but it'll do.

A quick trip back for the Waxwing proved fruitless except for a couple of Frogs in the garden pond. 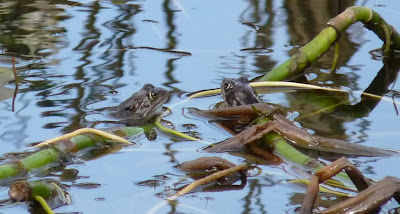 A brief stop on the scenic route home produced a Golden Eagle, 2 Slavonian Grebe, a couple of GN Diver and another Otter. F-stop caught sight of a butterfly as we were driving along but we didn't get an ID - a bit early but Peacock would be the best guess. Another 3 Otters were too far out for photos and we didn't have time to hang around. A quick stop to take a single photo of this Buzzard was worthwhile. 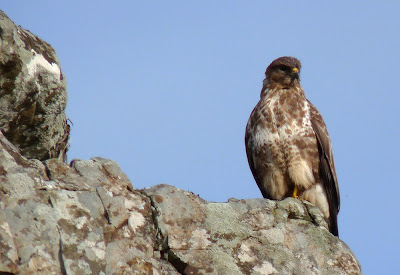 We headed back to base and clocked 3 Crossbills just leaving as we arrived.
Today I was out with Shop Lady in overcast conditions. A couple of short walks on the East side of the island would have to do today. We had a quick look at the 14 Whooper Swans as we drove towards Craignure. Our first walk didn't produce too much but that was expected. We clapped eyes on a couple of Stonechat that didn't want to be anywhere near a human. Primroses are pushing through everywhere but no sign of any flowers yet, even in the sheltered spots. I'd had a couple of those in flower by this time last year but it has been a bit nippy! There were plenty of Dog Violets starting to show too. 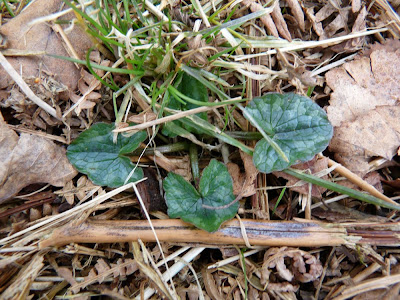 Next stop was a walk in the woods so likely to be more productive. Plenty of Chaffinches were noted before we picked up a mixed flock of birds. Great Tit.... 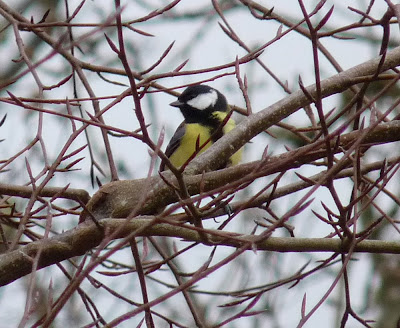 ...a few Blue Tit, a Treecreeper and finally a sighting of a Great Spotted Woodpecker! A couple of Reed Bunting were loosely associating with these birds too.

Three Long-tailed Tits gave me the run around. They are always on the move and wouldn't pose in the open for me but it was nice to catch up with them. 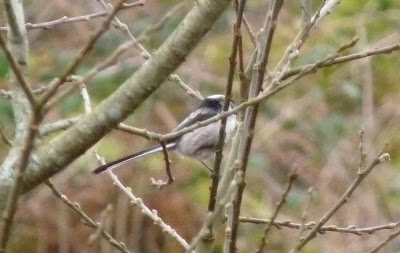 A couple of Song Thrush, 8 Greylag Geese, Blackbirds aplenty, Robin, another Treecreeper and Oystercatchers calling made for an interesting woodland list! We had lunch at the local Inn before making the return journey through the same piece of woodland. Two Treecreepers together and another GS Woodpecker were the best we could come up with before we got back to the motor. On the drive back home we noticed that the Whoopers had started to move off as only six birds were seen.
Posted by Bryan Rains at 17:51

You really are incredibly lucky living where you do, I can only wish I was there, but the blog helps, keep up the good work Bryan a superb blog

Hi Bryan,nice photos and thanks for letting those of us who follow you keep up to date with what you are seeing.Don't suppose the Sea Eagle with sat tag is Venus as Dave has said no signal for some time.Assume Eagle in Salen Bay which is a place we spend quite a bit of time there when visiting Mull but never seen a Sea Eagle there.

Great post again, Bryan. We are still snow-covered, but are in the midst of a big melt that I hope spells the end of the white stuff until late fall. I thoroughly enjoy the reports of your outings complete with photos! Keep it coming.

Stuart - It's a cracking place to be, for sure, but I'm sure you enjoy it when you visit.

Den - the eagle in question is probably Breagha. F-stop had a possible sighting of Venus on Mull a few days ago but we are waiting for confirmation of that.

Wilma - I read your blog regularly and it's a real treat. I'm pleased we don't get snow like you do. Our snowfall looks like a mere dusting compared to yours!!