It's a full year since I started the blog and it's still going strong. I'm not looking to do anything different - rubbish pictures and text seem to go together nicely.
I'm not venturing out that much at the moment but the year ticks are still trickling in. Over the last few days I've managed to get all three divers together, Common Crossbill, Goldfinch, Greenfinch and Tawny Owl. Cracking views of a Woodcock disturbed from the side of the road as we pulled up to watch an Otter was a memorable sight.
I planned to get out for a good look round today but that plan was scuppered! It started like this... 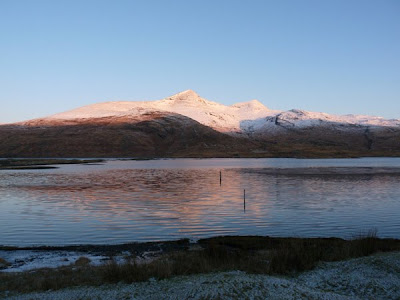 That's a nice view so I'll take a few photos. The sun was just catching the top and making the snow glow but the reflection just wouldn't come. More time taken up with a few jobs before tackling the Mallard that were in the shallows dabbling and preening. They moved away from the shore as someone approached along the road and headed into some nicely coloured water. The sun wasn't high enough to give enough light for photos but the way the ducks cut through the water with a shining wake made for pleasant viewing. 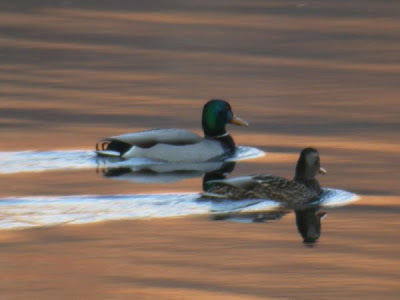 I spent the rest of the morning trying to catch up with the Crossbills that were determined not to stay in any one place for more than a few seconds and the Blackbirds fighting over a few apples out the back. No return for those efforts! I finally got round the loch in the afternoon to find that everything was as far away as it could get. The Black-throated Diver was having a snooze about halfway across the loch so I had to get a snap. If it's close in it's usually feeding and you can't keep up with it - one day I'll get it!

Again the effect on the water was a bit different but it showed a lot better in the rubbish Red-breasted Merganser shots. 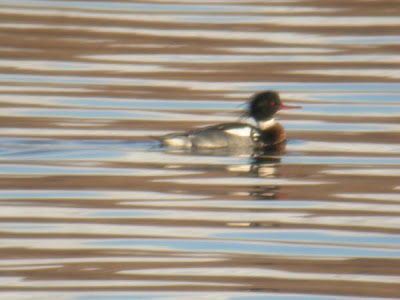 It's a mixture of the blue sky, the snow on the tops and the, snow free, lower parts of the hills. I thought I'd got a decent Merg with the last shot but that's rubbish too! 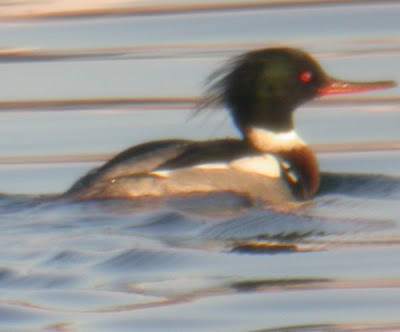 The weather is due to continue in the same vein for the foreseeable future so I've got plenty of time to improve things;-)
Posted by Bryan Rains at 16:52

Think you put yourself down too much about photos and species seen as even if they are on Mull they are not always easy to see.Good to have a blog from a professional Mull guide.

Well I'll have another year of what you offered in 2009!

Den - it's a frustration thing with the photos. I know I'll get them eventually but I want them now;-)