Monday I had a run out with a friend from Newcastle, Steve + 3 others, to try and pick up the local specialities. One of the aims was to get a decent photo of a WT Eagle. These kind of trips out can easily end in disaster as everything can decide it's having a day off or the weather is against you. It was the weather that won the day in the end but a cracking time was had all the same. We set off in decent weather with a nice breeze blowing. Steve managed to pick up an Otter but it was a brief view and soon lost in the choppy water. The next stop produced the goods properly as we stepped out to look at a couple of Common Seal close to shore and found three Otters even closer still. We'd had a distant view of a WT Eagle on the ridge already so we were hoping for better views as we moved along. The wind was just about guaranteed to get the birds in the air and we were soon watching a distant Golden Eagle and then a young WT Eagle. Nothing close enough for photos yet. The odd Crossbill was flying overhead as we search the surrounding area. Another young WT Eagle flew past us, again at a distance but the best we'd had up to now. We moved on and a young stag took us by surprise at the side of the road. 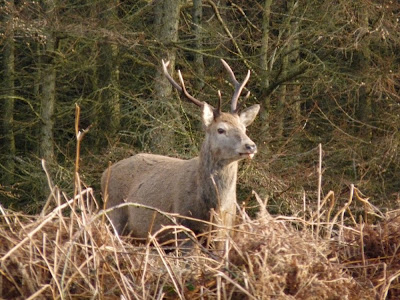 I managed to get a view of 2 adult WT Eagle over the ridge but they had drifted off before we could relocate to a decent viewing area. We decided to move on to try and better our chances. Another Otter on the shore eating a fish was picked up by Steve and his company while I was watching another WT Eagle flying above them! Plenty of RB Mergs along the way but there was a nice surprise of a pair of Goosander too. We got good views of Slavonian Grebe before checking out the Goldeneye, Teal, Shag, more Slavs etc. I picked up yet another WT Eagle landing in a tree across the other side of the loch so we headed for that. It wasn't too long before we had two adult WT Eagle circling in the distance and the bird that was perched up, but out of sight to us, hadn't moved yet. It didn't take too long before the close bird came into view followed by it's mate - result! 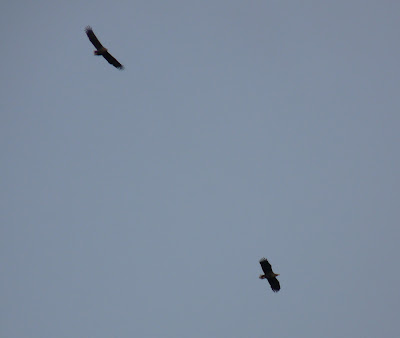 These two birds we not pleased by the proximity of the other pair and they called frequently as they saw the other birds off. 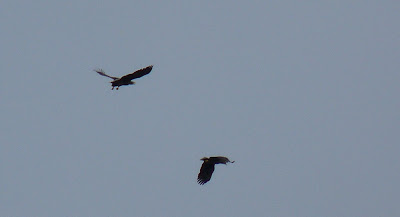 We hung around in the area to see if we could get any better views and the birds did come back but flew over us too high. They landed on the ridge for a wee while before being sent on their way by a Golden Eagle. It was all exciting stuff topped off by another fly past of the birds. 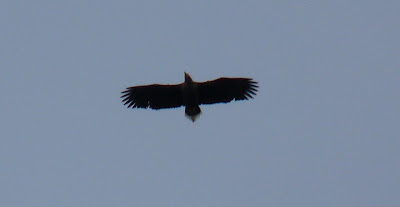 It was time for me to head back home but it had been a worthwhile outing.

Monday I had a call from the local estate to say a WT Eagle was sitting on rocks close to shore. The weather was pretty awful but I thought I'd give it a go. Naturally when I arrived the bird had moved further back. I took a few photos just because I was there. 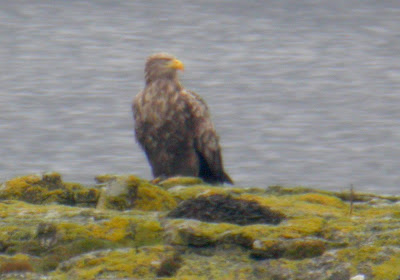 They were never going to be good shots in the conditions (they're not blurry, they're drizzly). I could hear a couple of GBB Gull calling to each other - they'd seen the eagle and were getting ready to launch an attack! The gulls started to dive bomb the eagle and he started screaming at them - funny to watch. Not much the eagle can do but duck or fly away but he was really craning his neck telling them where to go! 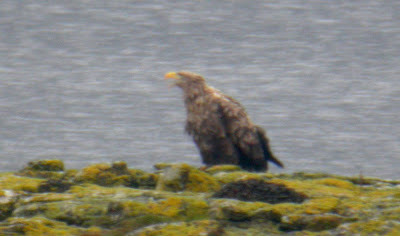 The gulls soon moved on and the eagle sat smugly on his throne. I headed back towards the dry and warm checking the loch along the way. A good dozen GN Diver were visible across the millpond flat loch along with a single Guillemot and this BT Diver. 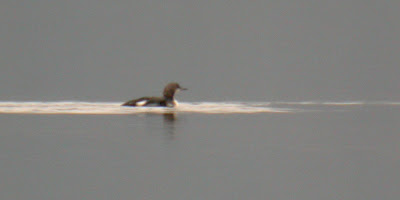 Not long after getting back the cloud dropped to ground level and that was the end of another day!

Quite a nice day with several Sea Eagles and Otters sure you all enjoyed it.As the Golden Eagle saw off the Sea Eagle in your opinion is that the usual outcome.rothicar

Goldies are a more tenacious bird and will see WTE's off territory. White-tails will defend the nest but, as a rule, non-territorial and will move off. Might be different if there is food on the go!