Sunday was looking good for another trek through the local wood for Capercaillie. It was a cracking day as we set off and made our way down to the start of the track where we immediately had 3 Red Squirrel. 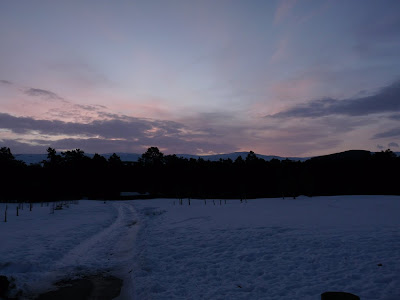 The going wasn't too bad this time but you still had to watch your footing and four people crunching through the snow with occasional giggling when someone fell over wasn't a good mix. The woods were a bit busier with the occasional Red Squirrel and plenty of Coal Tits present. 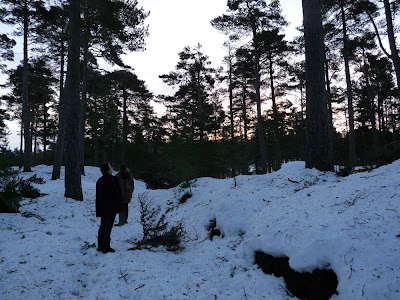 'Anyone see a Capercaillie?'

Our first encounter with something different in the woods was a small party of Bullfinch - stunning birds but I just couldn't get the shot. 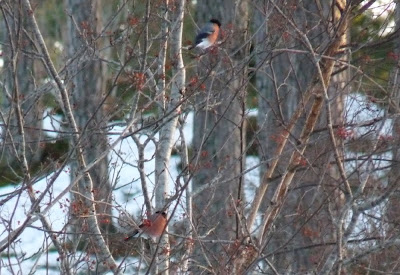 We took a different route this time and it wasn't looking good despite the beautiful surroundings. We must have been close to the far end of the wood when we picked up a couple of Crossbill flying over and we then decided to call it a day and head back. The Red Squirrels running around the forest floor kept us amused on the trek back until f-stop called us back. A lot of pointing through the trees eventually had us all trained on this....

...a blurry blob through the camera but a cracking view of a female Capercaillie that should have looked more like this. 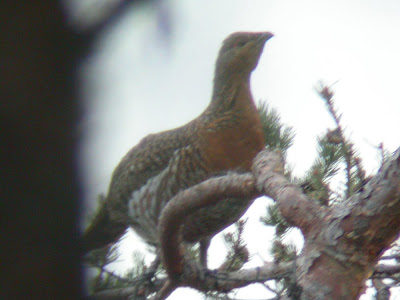 A job well done and a spring back in the step we marched onwards until f-stop called a halt again for a male Capercaillie this time. What a result!!! The male bird was away before I got any shots off but we'd got what we'd came for and after a total of 5 hours in the woods we'd earned it. We headed down to Glen More cafe for more shots of the Squirrels. We were greeted by a flock of Long-tailed Tits as we arrived and found the cafe to be quite full so we stood outside and waited for this.... 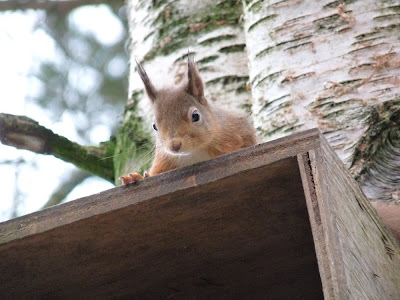 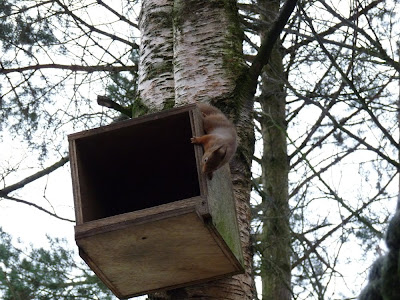 I could fill the blog with Squirrel shots but I'll move on with a shot of the Squirrel leaving. 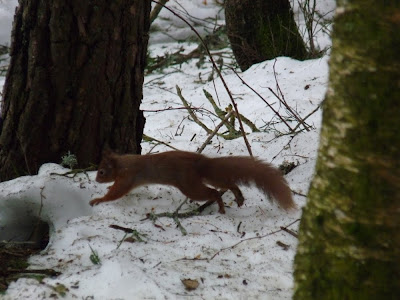 The light was still good so it was another trek back up the road to see if we could improve the Red Grouse shots.... 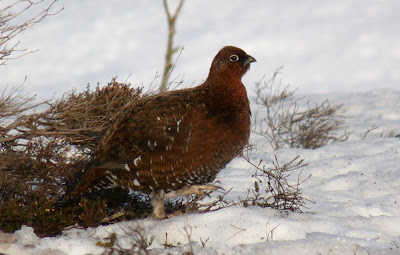 ...that'll do! Four birds at the side of the road showed very well and I'm sure we all got some good shots. The views were stunning everywhere you looked but it was difficult to find a place to stop and get the shots you wanted. 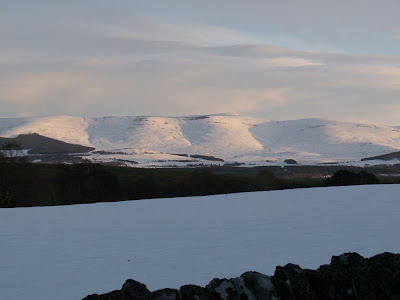 F-stop took a side road just to see where it would take us and we came up trumps again with these two male Pheasants having a discussion in the middle of the road... 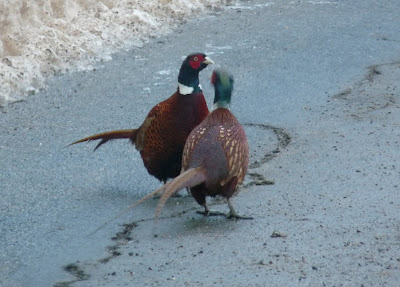 ...and a Brown Hare just a bit further down. No shots of that one as we were too close! We headed back to the hotel well pleased with the days haul again.

Monday was our day for travelling home but we had time to squeeze a few things in before we left Speyside. Cairngorm was finally open so we headed for there via Tulloch Moor. The drive across the moor was treacherous but it did produce our first Red Deer in the area, a few Greylag Geese and nothing else. The levels of snow were well down on what had greeted us initially and we could see patches of green in the fields. Again the views were spectacular on the way to Cairngorm.... 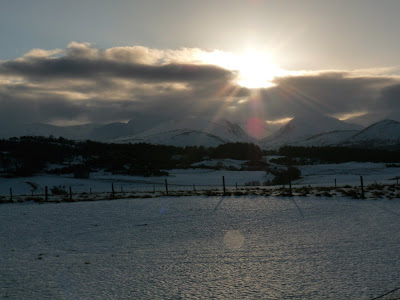 ....and from the car park the frozen Loch Morlich and surrounding area. 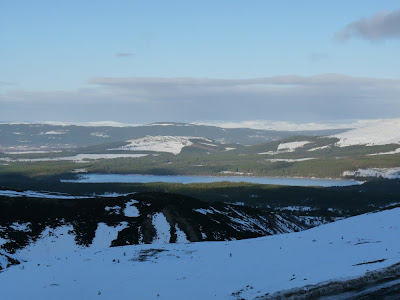 We would have taken the funicular but that was out of action due to the snow drifts. 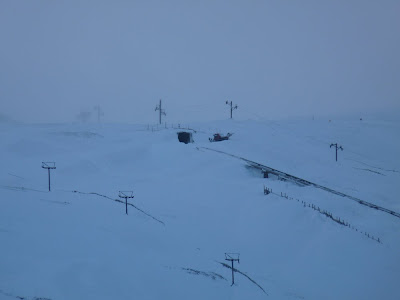 With no real chance of seeing Ptarmigan from the car park we concentrated on the 20 Snow Buntings that were flying around. We did pick up the odd Red Grouse here and there but the Snow Buntings were very flighty and this was the best I could get. 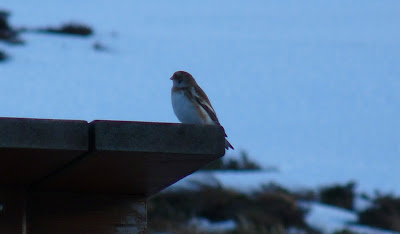 We decided to call time on the Highland Fling and head back to Mull very satisfied with the time we'd had. There wasn't a great deal to report from the return journey but I think there was more sleeping going on than anything else. The view down Loch Linnhe was at it's brooding best. 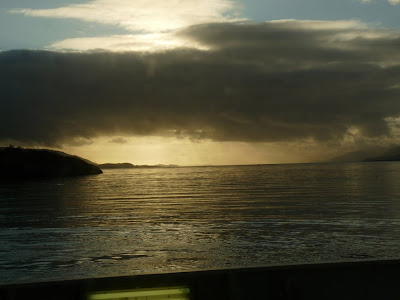 A stop for a cuppa was worthwhile as we picked up a couple of Otters in Loch Sunart.

Finally there was a bit of fog around that provided the opportunity for some atmospheric shots. 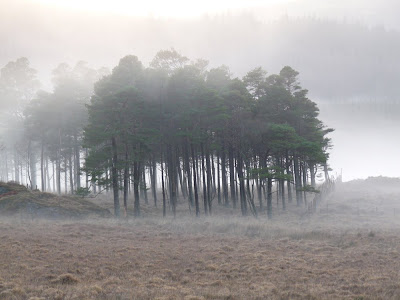 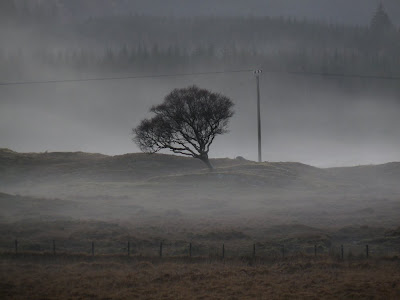 I haven't really ventured out since returning due to sorting through all the photos but yesterday I did get 2 Golden Eagle flying around outside the shop and the Crossbill was singing away too.
Posted by Bryan Rains at 14:48

Great read Bryan, beut scenery and birds topped off with Otters and Red Squidgers. Not a bad day out. My camera is hibernating at the moment

You did well with the capers..

Thanks for the comment about the address, I have removed and re-posted !