First of all apologies for the amount of photos but I'm sure you'll enjoy them! Friday I headed off to pick up PS on a cold and frosty morning. The views were stunning and the camera couldn't help but take a shot.... 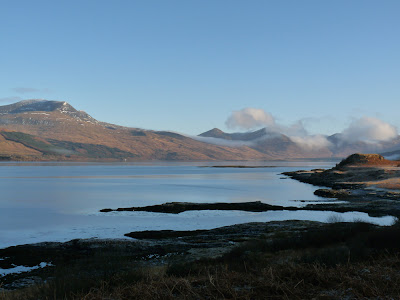 We stopped to take a few shots of a Red Deer at the side of the road but it wasn't working out the way we wanted it despite a few attempts. The Siskin shot was the best I could do. 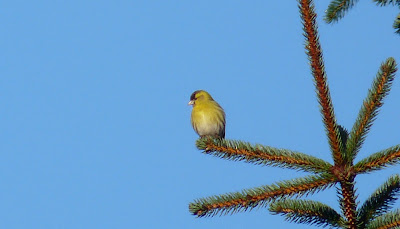 Next in the viewfinder was a couple of Otters - a male and female enjoying the sunshine. 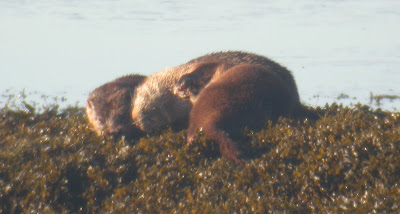 All very unconcerned by our presence and another furry beastie across the other side of the loch - not a bad start. We then stumbled across a mum with 2 cubs as we stopped for a photo opportunity of a Heron. The cubs were in a playful mood splashing about in the shallows as mum was off catching fish. 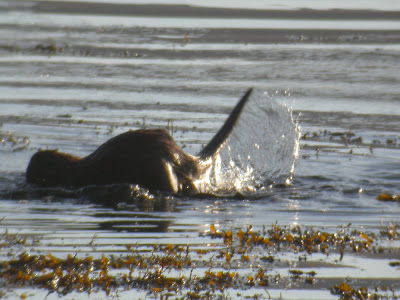 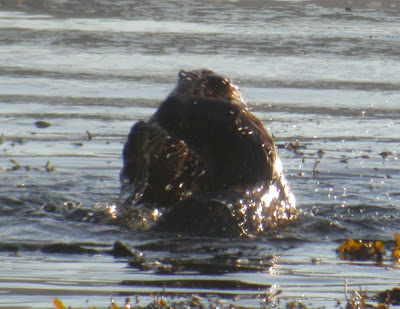 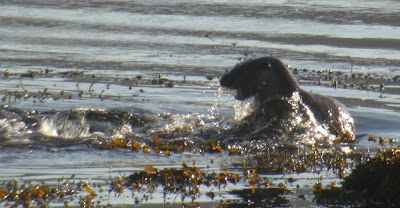 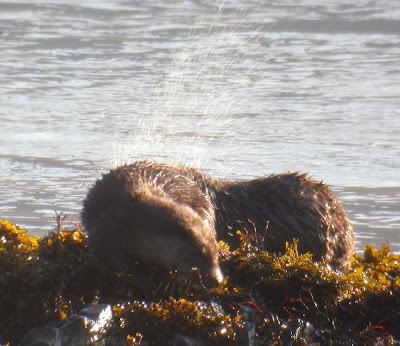 Mum was soon back on the scene to stop the fun and take them further along the shore but they weren't having any of it so she had to make a couple of attempts to drag them away - typical kids! 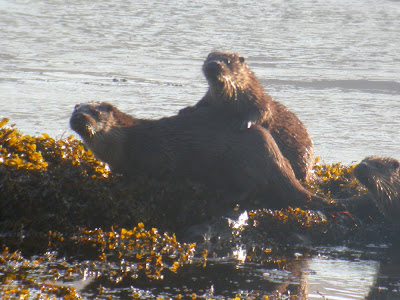 We moved on as the Otters moved off and after a distant view of an adult WT Eagle we headed for the far side of Ben More. We could see there was a bit of low cloud drifting across the loch but we were a bit surprised to find out how much low cloud there was - pea soup comes to mind! It was burning off but slowly. We picked up Otter number seven but he didn't want to play so we headed into the foggy bits. A few GN Diver on the loch along with about 8 Slavonian Grebe well spread out. Foggy stuff.... 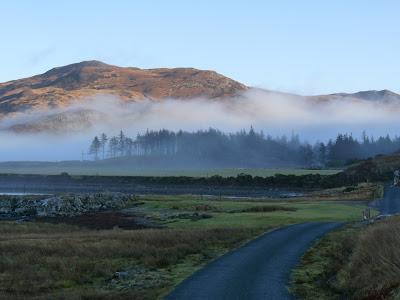 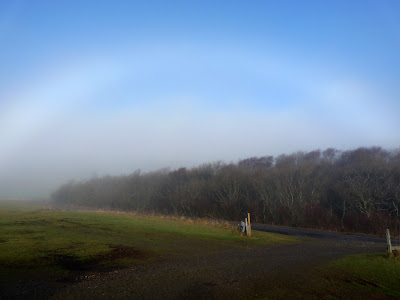 It wasn't looking too good so we headed off for a pie stop before making the return journey picking up a few Fallow Deer along the way. 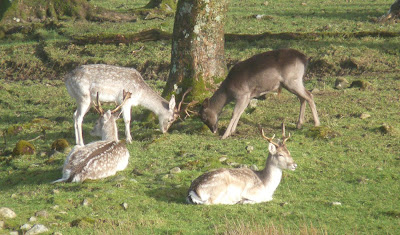 We picked up Otter number seven again as we drove back and he performed quite well this time... 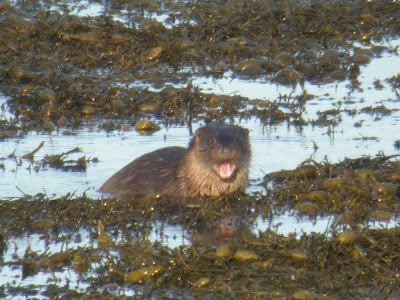 ...although you can see why they can be hard to see at times - he's in there somewhere! 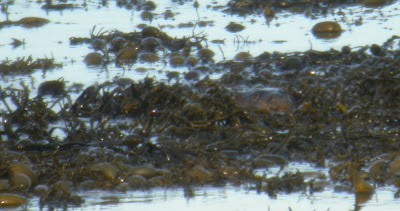 Again the views on the way back were spectacular and not very well captured ;-) 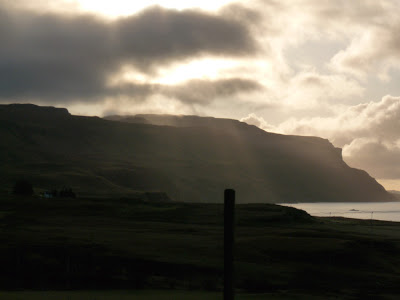 We got back on home turf to find it was still sunny and about 4 degrees warmer and the mum and cubs were heading off to bed.

A cracking day but PS still wanted more - Golden Eagle, please - we gave it a shot and hit lucky to find one just before it dropped out of sight. I had a count of the GN Diver on the way back home and found 14 birds but it was a bit too early for them to be grouped together for roosting.

Sunday is shop ladys day off so it was time for her to catch up with a few things. We started off with a walk and an opportunity for me to do a tetrad for the breeding bird survey at the same time. It was a lovely walk that started with a cracking male Hen Harrier and went downhill from there despite the uphill wander! Seven birds in total with Hooded Crow, Raven, Siskin, Meadow Pipit, Common Buzzard and Dunnock being the other six. A Buzzard sitting at the side of the road provided the first bird photo of the day after the blurry Hen Harrier shots but it made up for that. 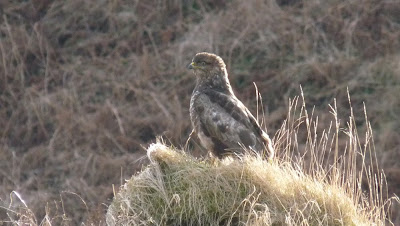 A close GN Diver didn't want to be photographed but another further out was posing quite well. While I was taking few shots the closer bird could be heard surfacing and diving and eventually gave a haunting cry as it broke the surface. A slight echo across the loch was superb - spine tingling stuff!!

A Shag coming into breeding plumage and showing that lovely green sheen was next for the star treatment. 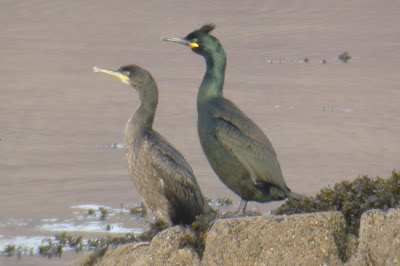 A fairly distant Otter was next on the list fishing away and eventually crawling out on the rocks after we'd viewed the RT Diver. A Curlew foraging in a rock pool looked good as a reflected silhouette... 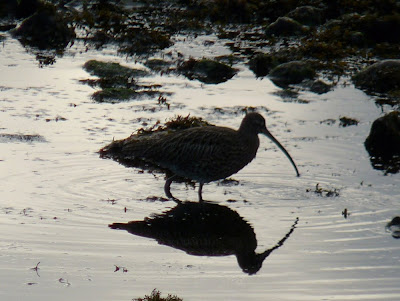 ...and the reflection of the sky wasn't too bad either! 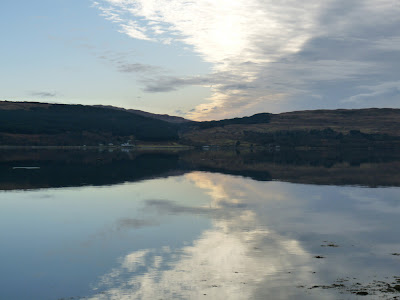 We did manage to catch up a mum and 2 cubs and an impressive 20 Stags together(15 in the photo)...

....before deciding to call it a day. You can't get home without seeing something else so another two Otters were no surprise but a real pleasure to see.

Excellent posting! superb photos and scenery! i cant wait to go back to Mull

Nice to have you back on Mull,no need to apologise about photos,think we all like them,amazing number of Otters,are they mostly between shop and fishery outlet or whatever it is called.

Great series of photos, I loved them all.