I had a quick run out on New Years Eve to see if anything was feeding on the lump of sheep as the light was slightly better. I was pleased to get a proper action shot of this young WT Eagle. 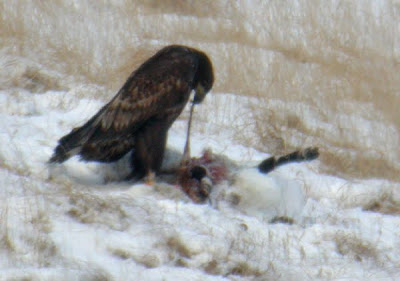 He's giving it a good old go!!
New Years Day was just the sort of pick you need after a good old night. It was clear and fresh and the wildlife was just on a plate. I started the day with Blackbird, Robin and Collared Dove rapidly followed by the plethora of birds on show out the front - BH Gull, Common Gull, Dunlin, Ringed Plover, Turnstone etc and I could hear Great Northern Diver calling in the distance. We hit the road and the jackpot - Golden Eagle were nice and easy quickly followed by two WT Eagle 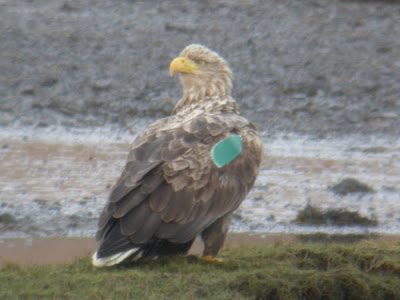 and two Otters (we saw EIGHT in total!!). We didn't search too hard but then we didn't have to and there is plenty of time to build the list.

We were only out for a couple of hours so a tally of 28 species of bird wasn't too bad. We had an invite out for dinner so there was always a chance of something in the dark too. The only thing we saw on the outward journey was a Red Deer but the return trip flushed a Woodcock from the side of the road and we saw an obliging Barn Owl sitting on a post - marvellous!
I don't do walking as a rule but I came up with a great idea of going for a walk today - I must be mad! We picked up PS and f-stop along the way and headed for the beach. It looked like this... 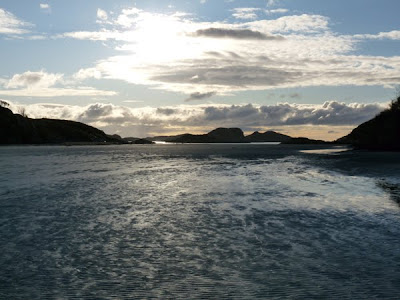 ..very pleasant and not a soul in sight. We'd already bagged four species of Geese in the area and three of the thrushes too with a female Hen Harrier to top it off. The Pink-footed Goose was hanging out with the Greylags today rather than the WF Geese.

Song Thrush was easier to see than Redwing but Fieldfares were the most numerous of the thrushes. Plenty of Golden Plover and Lapwing in the area and the Grey Plover is still hanging in. Wigeon and Teal were two good ones for the day, Shelduck was seen but just the one bird, also in singles were Pied Wagtail and Common Snipe. We walked across the estuary rather than retracing our footsteps. The water was shallow enough if you had wellies on so I got wet feet. The pools on the machair were frozen so f-stop had to try them out - he was lucky not to disappear in the first one! Mountain Hares have been hiding away recently so it was nice to see three of them running about and then stopping to worship the sun.

This Hare performed a bit better. 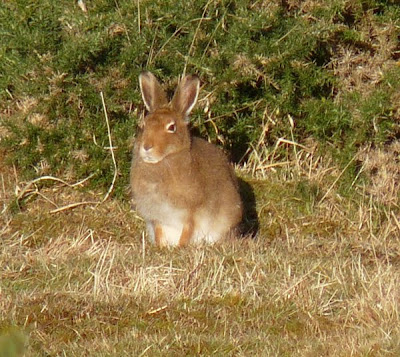 The shop lady was the next one to come a cropper as we crossed a ditch that wasn't quite frozen. In up to her knees she was - my how we laughed! Hacky black when she was pulled out! A pair of Stonechats greeted us as we got back onto the road and headed back to the motor. 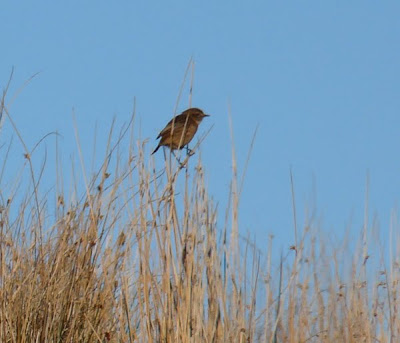 A very pleasant day out and another 30 species on the year list.
Posted by Bryan Rains at 16:28

Hi Bryan,always read your blog so only fair that I make the effort and comment.Always interesting and you mostly seem to see so much.We recognise quiite a lot of where you go from when we have been on holiday on Mull and have seen you taking visitors round.Don't suppose young Eagle very likely to be Heather?.Happy new year.

Hi Brian
Thanks for the blogs over the last few months, I have your site in my favourites now. Have a Happy New Year. Best Wishes Glynis

Thanks for the comments.
Den - I've been wating for info from RSPB about the WTE but no reply yet.
Ipin - It's just local stuff up here much the same as I'm jealous of what you see!
Glynis - thanks for following the blog. I should get an update done today:-)